This is a confident, ebullient tour de force from a remarkable 76 year old Scots performer, but its full appreciation perhaps needs an understanding of where Jock is coming from, in both old and new senses of that phrase. 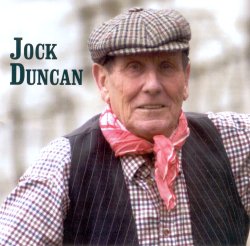 Jock was born into the North-East of Scotland farming community in 1925, a watershed time in the development of its music and song.  It is justly famed for being one of the richest areas in Europe for traditional song, especially the nineteenth century songs of farm life known as the 'bothy ballads', but at the time of Jock's birth, substantial changes were well under way.

The twentieth century had ushered in increasing farming mechanisation, the need for less labour and a flight from the countryside to the towns.  By the time Jock is 20 the old way of life, especially the great horses and the proud horsemen of the songs, will be gone forever.  The making of music and song had moved from the farms to the concert hall, with its astute performers such as George Morris (1876-1958) and Will Kemp (1889-1965) dominating the wireless and the gramophone.  The song style had changed, too, channelling into the 'comic song' genre that had been promoted at the turn of the century by the hilarious George Bruce Thomson (1864-1914), alcoholic and drug addict, of Macfarlan o' the Sprotts o' Burnieboozie fame.  The off-duty farm workers Jock was toddling amongst were as like listening to the wind-up gramophone, or glued to the wireless receiver, as singing or playing the 'auld sangs'.

But despite this onslaught of change there were many who held on to the old ways of song and singing, and Jock was fortunate to inherit these from his family (women as well as men), his fellow farm workers, and notably, the great farmer-singer, John Strachan of Fyvie (1875-1958).  Being eclectic, as all 'folk' singers are, his repertoire included Thomson, Kemp, Morris and the concert-hall tradition, as well as the printed songs from sources such as John Ord's Bothy Songs and Ballads (1931).  And as for so many, the 'Revival' later brought him into an even wider world.

Which brings us to the matter of performance.  A singer such as Jock starts life as a 'family and friends' entertainer.  Then comes the move to singing at small concerts/dances.  (Then, nowadays, there may come a move to competition, where performance skills are sharpened by competing against fellow singers, and repertoires are further expanded).  Then comes large concerts - and 'performances' - and to see Jock in full flight is an astounding and highly entertaining experience in front of riveted audiences.  But the next stage of this musical Rake's Progress is that of 'commercial recording'.  If fortunate, this may be from 'live performance' but more likely it's from studio sessions.  And here the producer/record company steps in with the deathly phrase: 'people won't buy unaccompanied singers'.  The question, therefore, of 'suitable accompaniment' raises its ugly head - and our Jock sings unaccompanied.

Now it is interesting to compare this CD with the one Pete Shepheard issued five years earlier (Ye Shine Whaur Ye Stan!, Springthyme Records SPRCD 1039, 1996), where Jock had backings from a group employing fiddle, concertina, melodeon, whistles (all good clean 'bothy' instruments) - not to mention guitar and electric bass, cauldwind pipes, bagpipe and bouzouki (this last less common on the farmsteads despite the snell wind blowing in from Russia half the time).  This remarkably catholic band, however, cleverly created the 'cheerful and altogether' bothy atmosphere, and seemed (mostly) remarkably appropriate.  (Advt: Very well worth buying).

Coming back to the present CD; it works best when - as might be expected - Jock sings unaccompanied.  This applies not only to 'great ballads' such as his powerful Johnnie o' Cocklesmeer and Lang Johnnie More but also to more rumbustious songs in his inimitable style such as The Strae Man, The Muckin' o' Geordie's Byre, and The Weddin' o' McGinnis.

The majority of the tracks, however, have accompaniments, mainly accordion and fiddle, and they have an 'added-on' feel to them, despite the fact that they are generally sympathetically done, and follow, rather than force, the singer.  Furthermore, they seem to provoke Jock into a sustained 'lyrical' mode of singing which lessens his usual impact or charm with both big ballads such as The Flower o' Northumberland, and concert-hall songs such as The Moss o' Burreldale.  To be fair, there are enhancing accompaniments, such as those to the strong Macpherson's Rant and the extremely moving Sir Patrick Spens (to Duncan Williamson's tune).

The 17 tracks cover the great range of a singer such as Jock, from fireside to concert-hall, from very old to very new, from the cold chill of 13th century seafaring disaster to the hilarity of the modern comic song, sung with his typical understanding, feeling and panache.  His tunes, moreover, are not always the 'usual' versions.  The insert booklet is very well produced, with the words of the songs (vital, this), concise but informative notes, Jock's own comments and folk histories, and interesting, well-reproduced photographs.  Non-Scots speakers (indeed, non-North-East Scots speakers), however, may be troubled by the lack of any glossary (I would recommend the Concise Scots Dictionary).  The producer, Ronnie Cairns, is to be complimented for packing in so much, so well.  (Sole complaint: why is the tragic Charlie Parker not credited with the Radio Ballads?)

I would have been happier if such a successful niche operation as Sleepytown had gambled on issuing Jock as he naturally performs, instead of making the 'unaccompanied don't sell' compromise, but it's not me that's putting up the money.  Perhaps someday someone will issue Jock in full flight, unaccompanied, on video or DVD - and that is going to be a 'must-have' for anyone who wants to see and hear a top performer in this thriving tradition.