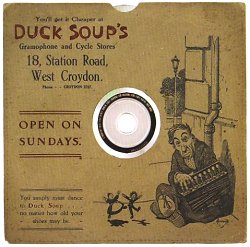 Another little cracker from the Prince of Portslade and his friends-in-fun from just along the coast in Brighton.  I was hugely enthusiastic about Duck Soup's first CD, back in 2005, and - since nothing has diminished their superb musicianship and sense of humour in the following five years - I can do little more than direct you to that review.  Everything I wrote there remains true of this new CD.

However, there are some differences.  Most pleasing of these is that Dan Quinn's singing on the present disc is far better than on the earlier one.  He's a great singer, but I don't think the 2005 recordings showed him at his best ... happily, this is remedied here.  I don't think I've heard him in better form.  And the songs are all splendid: The False Lover Won Back comes from Aberdeenshire, via Martin Carthy; while The Bonny Bunch of Roses has an even more convoluted origin.  Norma Waterson had only the first verse, which she believed had come to her, via Bob Davenport, from the Suffolk melodeon player George Woolnough.  We were surprised at this, as we'd never hear George sing at all ... an, upon later enquiry, Bob denied all knowledge of it.  Danny Stradling fell instantly in love with the fragment, and concocted the remaining four verses.  Young Morgan is a long highwayman song, based on a couple of 18th century broadsides, of which Phoebe Smith sang two verses on the 1998 Veteran CD, The Yellow Handkerchief, to a most splendid tune.  Martin Carthy put together a coherent version of it, and this is what Dan sings here.  Finally, we have Little Brown Jug, a jaunty little drinking song, collected in 1907 from William Smith, of Stoke Lacy, Herefordshire.

Roud has 58 instances of the song, almost all from the USA, and only Mr Smith and Elijah Iles (collected by Alfred Williams in Inglesham, Wiltshire) are known to have sung it in England.  Dan sings it with great panache, and the band backs him up wonderfully.  This may be the ultimate Duck Soup performance - fo me, at least (sound clip).

Another difference is that almost all the tunes heard here are from what might be called 'foreign' sources.  Items from Alfred Montmarquette's accordion repertoire feature strongly, alongside melodies from France, the USA and Ireland.

Since few of them are familliar to me, it's difficult to know how long they spent in the Duck Soup food processor, and what changes have been wought therein.  The An Súisin Bán I know is a slowish dotted hornpipe - here it emerges as a 'lumpy' schottische (sound clip).

The final difference is that Mr Bushell has a rather different take on graphic design than the polychromic Mr Kearey, making the, often amusing, insert notes far easier to read, and less likely to cause headaches.

This is a splendid CD - and absolutely perfect music to play in the car as you head off into the latter half of a summer of fun!  You'll not regret buying a copy from the usual sources, or direct from Dan at: danquinn@ntlworld.com