Jemmy Duffy's Barndances; Blackthorn Hornpipe / The Blackthorn Reel / The Killarney Boys of Pleasure; Planxty Davis; The Liffey Banks / The Shaskeen; The Mist Covered Mountain / Scatter the Mud; The Morning Thrush; Maids on the Green / Fasten the Legging; The Pigeon on the Gate / The Stony Steps; Mick O'Connor's Reels; The Maids of Mont Cisco / Come West along the Road; The Boys of Tandragee / The Wandering Minstrel; The Broken Pledge / Bill Hoar's Reel 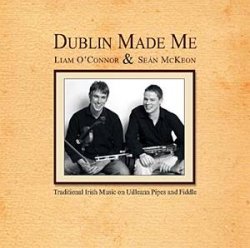 Two fairly brief reviews of a couple of Irish music CDs which arrived almost simultaneously.  The first, from Liam O'Connor and Seán McKeon features duets on fiddle and uilleann pipes, plus a solo track from each of the players.  The playing - from these two young multiple-All Ireland winners - is, as you may guess, best described as 'fierce'.  That translates as powerful, technically skilled, and fast.  For the most part, they are so skilled that the fast tempi do not bother me - and the few tunes which are not reels or jigs do proceed at a very reasonable pace.  Only on a couple of occasions do the reels feel just a bit too fast - but the rest of the time this is just really exciting music in the modern style, though with plenty of references back to players of previous generations.

The CD's title is very apt - this is city music as opposed to country music - all reels and jigs except for a couple of marches, a slow air and a set-dance.  Unsurprisingly, I suppose, it is these tracks which most appeal to me.  The first track, The Races of Ballyhouley, is a truly splendid slow march, taken from the pages of the P W Joyce collection, commemorating an 1834 massacre at Gortroe near Fermoy.  The text of the song to this tune is said to reflect 'the spirit of refusal to bow to injustice' - and one can imagine that, with this stirring melody, it does the job most emphatically.

The other march is here called the Ancient Irish War March, and will be most well-known as The Boyne Water, which dates it at not too long after the 1690 battle - hence the 'ancient'.  Since then it has carried the words of numerous songs and has spread widely beyond its native soil: the melody played here, particularly its A music, is still recognisable in tunes with such odd titles as The Boy in the Water and Boiling Water found elsewhere in the British Isles and North America.

The slow air Táimse i m'Chodladh is ná Dúistear mé is often played, as here, as a lament, even though the verses are in the form of an aisling.  The playing is very fine and, as all slow airs should, has you on the edge of your seat for the whole of its almost 5 minutes duration.  Rather oddly, the two solo tracks (The Ladies' Bonnet / The Pinch of Snuff - Seán, pipes, and The Duke of Leinster - Liam, fiddle) are so designated in the track listing, while this is not ... even though it's just Liam playing, albeit with some double-tracking toward the end.

The set-dance set, The Hunt / An Súisín Bán is very nice and, for me, it's a great pleasure to hear two tunes I've known and loved for so many years played again - though I do miss the F natural in the B music of the version I play.  Sadly, the generally excellent and informative booklet notes tell us almost nothing about these two tunes.

As a little aside, neither The Sweet Briar nor The Stony Steps are the same tunes as those which bear these titles for English musicians.  Another little aside, This is the first Na Píobairí Uilleann release to include any instrument (fiddle) other than the pipes; so it's a bit of a surprise that these latter get fewer tunes and sound further back in the mix than the fiddle. 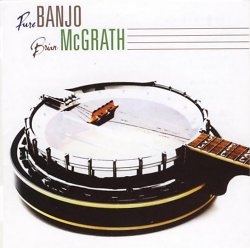 The Brian McGrath CD is very different to that just discussed - and, for me, a much more enjoyable experience, being 'country' rather than 'city' music.  Brian hails from Brookeborough in Co Fermanagh, and kicks-off with the delightful Jemmy Duffy's Barndances from the melodeon player from his home county.  Oh, I can see I'm going to enjoy this!

True enough, the second track starts with a lovely hornpipe, The Blackthorn.  And track 3 is the set-dance, Planxty Davis, played very nicely on the guitar rather than the banjo.

One of my pet hates is the apparently 'solo' CD which is subsequently found to be by a large band of shipped-in famous players.  I was worried that this might be another of these but, the four additional musicians listed here mostly confine themselves to sensitive accompaniments - Aidan Flanagan does lead with some pretty hot flute on a couple of tunes, but Brian is still there, well up in the mix - as he richly deserves to be.

Track 6 is The Morning Thrush, a reel composed by Seamus Ennis' dad, and the playing (again on guitar) is as relaxed and tuneful as anyone might possibly wish.  Indeed, this is a comment which might, with justice, be made about all the rest of the CD's 12 tracks.  I like this record very much.

Both these CDs may be a little hard to find for a couple of weeks as these were pre-release copies I had to review.