Down from Bell Harbour

Reels: The Tinker's Daughter / The Coalminer / The Master's Return.  Jigs: Apples in Winter / The Maid on the Green.  Reels: The Reel of Mullinavat / The Whistling Postman / The Chattering Magpie.  Hornpipes: Joe Cooley's / Cronin's.  Reels: Traver's / The Jolly Tinker / The Woman of the House.  Waltz: Bell Harbour Hills.  Jigs: The Knights of St Patrick / The Killimor.  Reels: The Bell Harbour / The Pullet / The Boys of Portaferry.  Air: Peaceful Corcomroe.  Hornpipes: Sliabh na mBan / The Home Ruler.  Reels: The Parcel of Land / The Kilfenora Reel.  Jigs: Katie's Fancy / The Boys of the Town.  Reels: The Maid Behind the Bar / The Holy Land / The Rainy Day.  Waltz: The Green Hills of Clare.  Jigs: The Clogher Rose / The Bride's Favourite.  Reels: The Congress Reel / Come West Along the Road / The Dawn. 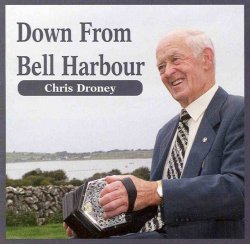 The master's return indeed!  To look at me now, you may not believe that I was once acquainted with an expert on folk music.  Well it's true, and so erudite was this adept that he could exactly determine the quality of someone's performance just by listening to it.  What's more, the zest with which he imparted his learning - free, gratis and ad nauseum - was as impressive a spectacle as Vesuvius in full flow.  All he demanded was that the party on the receiving end would accept his learning completely and utterly, and woe betide the ears of all who declined to concur.  I wake up every morning to the recollection of his iconoclastic salvo, when I mentioned the name of Chris Droney.

"Chris Droney", he sneered.  "What's Chris Droney got to do with traditional music?  One day they'll build a computer that can play like Chris Droney."

Well, that guy must be about ready to eat his words.  My computer has just been playing Chris Droney, and a most agreeable sound it made.

Surprisingly, considering the length of time he has been playing, and the esteem in which he is held - his playing career goes back almost three quarters of a century, and he is a nine times winner of the All Ireland Fleadh - this is only Chris Droney's fourth solo outing on disc.

1  Whatever, it may well be his most successful.  Droney works his way through a predictable, but highly enjoyable programme of jigs reels and hornpipes, interspersed with a self composed air - Peaceful Corcomroe - and a couple of waltzes.  He does so with considerable surety and authority.

Gravitas may be a strange word to use in these circumstances, but it's a fitting one.  For all the drive and enjoyment and sheer danceability which flows from this music, there is never any doubt that we are in the hands of a master.  Indeed, I find that nine times All Ireland achievement somewhat astonishing, for there are none of the flashes of virtuosity and technique for technique's sake which such accolades might conjure.  This is good, solid workmanlike music.  It is brilliantly executed but nowhere, the slow air excepted of course, does he lose sight of the fact that this is dance music which works best when it is played as dance music.  Nor can I detect any signs of age.  Chris Droney must be well into in his mid to late seventies by now.  Yet, while his music is agreeably paced, he plays with the agility and panache and sure fingeredness of a master player in the prime of life.

The disc does however include a piano accompanist in the form of Jacinta McEvoy, who strides gamely along behind the concertina.  I'm not keen on accompaniment and I find the combination of concertina and piano a rather strange one.  Even so, the instruments are acoustically well balanced and Ms McEvoy certainly knows what she's about.  If her piano playing didn't add anything to my enjoyment, it certainly didn't detract from it.

A pity therefore, that just as concertina and I were getting along so well, its piano accomplice tried to slip the mickey into my aural senses in the form of some soothingly soporific guitar.  In case you hadn't guessed, this happened at the start of the Waltz: Bell Harbour Hills, and the mixture was repeated with The Green Hills of Clare.  Fortunately, in the air, and a most pleasant air it is too, the guitar stayed well in the background.  Those waltz selections and the slow air bring a nice bit of light and shade to this disc, but they would have been much more effective had the concertina been allowed to stand on its own.  Also, I could have done with a bit more energy in that second waltz.  It's a little too slow and a little too laid back and I couldn't help being reminded of the closing stages of a marathon dance competition.

Those two cribs apart, I cannot recommend this disc too highly.  In an age when far too many 'traditional' music CDs seem to be more about precision and polish than about soul and conviction, this is a gentle reminder of what Irish music sounded like before it hit the big league.  The master returns and how.  I wonder whatever happened to that expert?

(1) The CD booklet is somewhat confused over Chris Droney's discography, claiming that the LP, The Flowing Tide, was released in 1962, as the first of three solo albums.  In fact The Flowing Tide (Topic 12TFRS 503) was recorded in 1974 and released in 1975 as a Topic/Free Reed collaboration.  Since then, Droney has recorded The Fertile Rock (Cló Iar-Connachta CICD 110) and now of course Down From Bell Harbour.  There is also a cassette by Chris Droney on the Copley label, which is called Irish Dance Music.  Copley's website - www.regorecords.com - has no discographical information about this record.  However, the accompanying photograph shows a young looking Chris Droney.  Therefore, I'd guess this is the one which hails from 1962.

Incidentally, it's not just Mr Droney who belies his age.  That cassette is available from Copley at just $6.99 and that's a price I haven't seen in many a long year.