Dreams of the Road 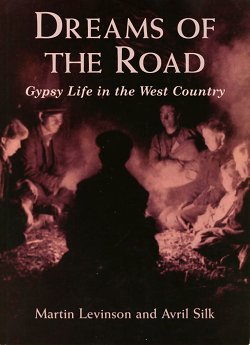 Timothy Neate is a fine film maker whose work I was introduced to by Bob Pegg in the mid-nineties.  Very soon after my daughter bought me Neate's excellent book The Summer Walkers and in 2002 I reviewed it with others in his Birlinn series, including The Horseman's Word.  These two vibrant and skilfully written books are about Scottish travellers; The Summer Walkers is made up of interviews with pearl fishers and travellers in the Scottish highlands (Alec Stewart, of Blair, was a pearl fisher - see Sheila Stewart's excellent book about her mother, the great Belle), and The Horseman's World uses the same technique to tell the tale of 'blacksmiths and horsemanship in twentieth century Scotland'.

If I had not read these books first I would probably be far more kindly disposed towards Dreams of the Road - Gypsy Life in the West Country by Martin Levinson and Avril Silk.  This book also uses substantial interviews but, unlike the Scots books, it does not entirely trust its subjects to tell their own stories and often holds its text together with (I believe) unnecessary explanatory notes.  I'm certain the intention was not to be patronising, but I did find some difficulty in not reading it that way.  Neate managed to keep any necessary explanation in separate sections of his books, thereby making them quite scholarly enough for my taste, while allowing the natural eloquence and authority of his informants to stand on their own.  In his preface Martin Levinson describes his book as a 'shared project - between us and our guides', and this I think underlines my opinion.  Timothy Neate's books do not seem to be 'shared' in this way; the 'guides' alone are allowed to share with the reader.

None of that withstanding, this is a book which takes one through every aspect of gypsy life, for instance childhood, community, education, work, and 'fisticuffs, fairs, a bit of courting', and some interesting points are made.  One of the informants, Robert Smith, echoes much of the abiding fear of Gorgio workers "We could flutter to pea picking or hop picking or cherry picking and be gone ...  no other group could do this - hence they're bringing them in from abroad."  And again the inter-reliance of the Gypsy and settled communities: 'The mothers used to go to the doors selling and they used to ask "You haven't got a bit of bread for the children?"' while 'at the same time there are memories of farmhands and other villagers, including local bobbies, coming to sit round the campfires, sharing food and stories ...  and people recollect policemen cycling to sites to pass on news to families.'

Some of the most interesting parts of the book are how they underline what one has already heard from others of Gypsy life.  Many years ago Scan Tester told Rod and I stories of fights among Gypsies in local pubs, which are echoed in the chapter on 'fisticuffs' etc.  Scan would say "but your Gypsy was an honest man, you knew where you were with him".  In the chapter on fortune telling 'Anna' (the reader is often not certain who the informants are, as the acknowledgements are far from clear, nor are they at all comprehensive

) says "I first found out I had the gift when I was very little" while Phoebe Smith in her film made with Peter Kennedy says "some people could do it but I never could."  Anna says "We're not like other people" and Phoebe acknowledges that the gift was given to "witches, not ordinary people".  She also believed that fortune telling was often an act - "I wouldn't lie.  Truth and honesty are the greatest things in the world ... I don't believe in it", and Anna says "Obviously I charge, I couldn't just do it for nothing ...  I ain't no fake".

There are some odd omissions in the book.  For instance, although Tom Orchard is a main informant in the chapter on music, and rightly his two sons who died so tragically are mentioned alongside his two other musician sons, his mother-in-law, the wonderful Amy Birch, is dismissed in a couple of words - "Jean's mother was a good singer" as though she were dead, which she decidedly is not.  However, mentioning yet again a favourite pastime of these west country Gypsies "My dad could sing and play the box - all the family can do something.  If they couldn't sing or dance years ago they used to fight."

The love of the now nearly abandoned open road, and the way of life that went with it, are evident on every page, the horses and wagons, the campfires and camaraderie, are all here.  Although I have misgivings about this book, it does have a, somewhat limited, glossary and some splendid photographs.  Birlinn have published yet another interesting book on Gypsy life in the British Isles.

Indeed, much information is quoted, often partially and/or inaccurately, from magazines, LP sleevenotes, and similar sources without citation or, in some cases, permission.  Musical Traditions CD booklets are so treated, as is Keith Chandler's MT article on dancing booth musicians (MT078); here, information referring to practices in Oxfordshire and East Anglia is erroneously quoted as referring to the book's area of reference in South West England - Ed.