Being known as an ex-anything can be a mighty millstone to bear, especially in the fickle world of the music business.  Such is the case for John Doyle, ever to be described as the ex-Solas guitarist, who quit the band last October after a stint spanning four years and an equal number of albums.  For those familiar with John's high-powered guitar work with Solas, his first solo album offers a refreshing surprise. 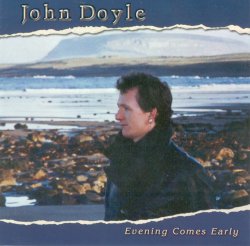 Mellow and reflective in tone, Evening Comes Early, evokes the spirit of the exploratory decade that began in the mid-sixties and offers echoes of Martin Carthy, Nic Jones and John Martyn in several ways, while his playing of reels such as his own composition The Hungry Rock, is reminiscent of the lightning quick skills of Arty McGlynn.

On Solas's albums, John's ripely melodious voice was usually tucked away in the background, but here is given full rein on a varied, yet balanced selection of songs which includes Ewan McColl's North Sea Holes, traditional material such as Pretty Saro from his new home of North Carolina, a fine version of Young Willie Reilly (learned from Robert Cinnamond's You Rambling Boys of Pleasure album) and one of his fellow Dubliner Dominick Behan's classics, Crooked Jack, while The Wheels of the World sees him reunited with singer Karan Casey.  Even his father, Seán, gets a look in, providing a resonant version of The Dark Slender Boy, the English translation of An Buachaill Caol Dubh.

The undoubted highlight of the instrumental tracks is a frenetic duet with Liz Carroll on a Donegal version of Crowley's reel, learned from Paddy Glackin, where Liz's fiddle soars and swoops before launching into one of her own compositions, Johnny D's.  Elsewhere, there's another sparkling set, this time of three jigs, kicked off by Young Tom Ennis, and featuring another ex-Solas colleague in concertina player John Williams.

All told, Evening Comes Early is hugely enjoyable throughout and marks an auspicious debut from a seasoned pro.