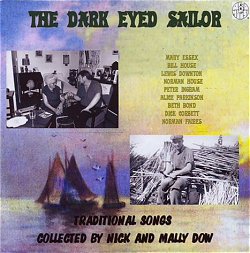 It was a pleasant surprise to find these two CD-Rs dropping through my letterbox last week - a surprise because it's rare to find records like these being published by anyone except MT Records and Veteran these days.  Even more of a surprise was the quality of the singing.  The Dows give dates for almost none of the recordings, so one tends to assume that these may be fairly recent tapes, and all the singers will be old and croaky with a shakey grasp of pitch.  Furthermore, with the exception of Bill and Norman House, none of the singers were known to me, and the selection of songs appeared to be pretty much what you would expect.  Not a bit of it - these CDs contain a number of unexpected joys.

The first CD starts, as one might expect, with The Dark Eyed Sailor, sung by Mary Essex; this is not the strongest track on the record, although it's a nice performance of a good song, but track 2, Young Willie, from Peter Ingram, is by far the best on the whole disc.  He's an English Gypsy, around 60 years of age at the time of recording, yet has none of the country and western influences one so often hears from younger generations of Gypsies these days.  He's a very good singer, and this is a great song I'd never heard before, which uses the same tune as the Brazil Family of Gloucester use for the very rare My Schoolmaster's Son.

Another good singer, Alice Parkinson, follows with a version of Her Box on Her Head, to a very nice tune I'd not heard before, and I was pleased to find that she also sings The Golden Glove on track 6; again not to the 'usual' tune.  I particularly like the fact that she sings extremely accurately (rather like Bob Hart) and doesn't 'flatten out' the tune as so many singers tend to do.  Alice's sister, Beth Bond, gives us a fine and humerous The Farmers and the Cow on track 10, and sings with equal precision.  They came from Singleton, near Blackpool, and remind us that not all the bucolic songs came from the southern counties of England.

Two more fine singers are the aforementioned Bill and Norman House from Dorset.  Bill sings The Seeds of Love on track 7, sounding about 20 years older than he does on track 13, the lovely Bonny Blue Handkerchief.  His son Norman provides a very nice version of The Iron Door on track 4.  Given that these were all field recordings with domestic recorders, the sound quality is as good as you could expect, and allows a perfectly pleasant listening experience.  I feel it's rather a shame that we only get 39 minutes of songs ... these days, one would hope for a little more.  Also, my continual gripe, we need more than the default 2 second gap between serious songs - and when you're making them yourself there's no excuse for this. 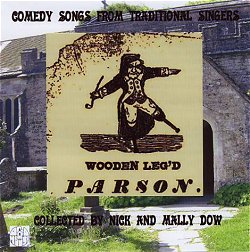 I'm sorry to say that the second of these CDs is far less impressive - to me, at any rate.  To start with, it's only 27 minutes duration, so with 14 tracks, you can guess that several of the singers only give us one verse and a chorus of their songs.  Beyond that, so called 'comedy' songs are rarely particularly witty, and nor are they usually delivered with much thought having been given to the performance, beyond remembering the words and the tune.

Here we only find a couple of songs with much in the way of wit - Nobody Noticed Me, beautifully sung by Bob Cann in the past - is provided here, with just two verses and a poor grasp of the tune, by Doug & Sam Phillips in the midst of a pretty rowdy pub evening.  They make a far better job of Slap Dab later on the disc.  The other truly witty song is I Pity Myself, I Do, as imortalised by Ken Langsbury, but here called Old Billy Pimple for some reason.  Bill House sings it quite well, but not outstandingly.  He also contributes the longest song on the disc, Timothy Briggs the Barber, featuring the 'Wooden Leg'd Parson', in case you were wondering where the title of the CD come from.  Few of the other songs contain much humour beyond mother-in-law jokes and the like.

I enjoy real humour as much as the next man, but I'm afraid I didn't find much to laugh at here - in fairness, the English country singer was never much given to really funny songs in my opinion, so I shouldn't blame Nick and Mally Dow, or their singers, for this lack.  It's a pity though, after the promise of the first CD reviewed here.

Both CDs are well produced and presented, and good value at Ł6.50 inc P&P, from Nick Dow, Fairview, Laneshawbridge, Keighley Road, BB8 7HR - or via PayPal from sales@gypsy-wagons.com