Back in November 1992, the Burren Sub-Aqua Club decided to hold a benefit concert at the Falls Hotel in Ennistymon.  They asked Matt Molloy, Tommy Peoples, Sharon Shannon and many other musicians from Clare, or closely connected with the county, to play.  15 performers turned out for what proved to be a mighty night of music. 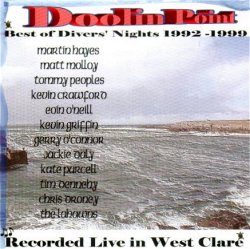 The concert finished at 2:30 in the morning and the session ended at 7:30, just in time for breakfast.  The concert was such a success theyĺve repeated it every year since.  Launched at the end of July, this CD gives a small taster of the concerts from that first night to the 1999 concert, and the CD could easily be three times its 50 minute length.  It is of the highest standard from start to finish.

The CD kicks off with a couple of fiddlers, Martin Hayes from 1994 and Tommy Peoples from 1992.  Martin Hayes shows his lonesome touch on a couple of reels from his first CD which eases you into the mood nicely for the track from Tommy Peoples.  The better you know the tunes, the more amazed you are at Tommyĺs ability to twist and turn a tune around without ever leaving the basic core of the setting.  The way he plays with the beat in The Dairymaid is simply stunning and the way he uses the top G in the second part is heartbreaking.  Tommyĺs soul speaks through his music.

The fiddlers are followed by flute players.  Kevin Crawford is an exuberant player on stage or in session and his two reels are full of ornamentation, rolls, and tongued triplets, driven along with a lot of punch from guitar player Donal Clancy.  Matt Molloyĺs playing has had every superlative in the book applied to it and his contribution from 1992 shows why.  Itĺs interesting to hear the flutes one after the other, Molloy seems a lot smoother than Crawford, less fussy and certainly led by the tune rather than the ornamentation.  Mattĺs playing of the two Kerry flings seem almost effortless, yet there is some very tricky fingerwork going on to get the rhythm to roll so easily.  When he breaks into the reels finishing with Jennyĺs Chickens all the pyrotechnics are put on display.  Five years after his first visit Matt returned with his son Peter in tow for a set of jigs.  Breathing as one, the two players make a great case for more recordings of flute duets.

The halfway point on the CD is marked by two songs, Kate Purcell sings a contemporary ballad and Tim Dennehy offers a wonderful light hearted tale of the Famous Faha Sports.

The next seven minutes are devoted to Jackie Daly who gives an object lesson in Irish pull and draw box playing.  The track starts innocently enough with the jig The Boys of Tandaragee, then Jackie starts to put in a few of his hallmark triplets and double stops in the Geese in the Bog before launching into three reels where every known variation and trick is used.  As the pace picks up, Jackie calls out the key to Monica on the piano, draws heavily on the bellows, and powers through to a rousing crescendo.  Itĺs enough to put a smile on any face.

Kevin Griffin, the banjo player, offers a pair of reels accompanied by Eoin OĺNeill, Ted McCormack and Kevin Crawford variously on bouzouki, guitar and bodhran.  The banjo playing is clean and punchy but the track is marred by an un-necessary bodhran solo.  If the culprit is the ubiquitous Kevin Crawford, one can only hope that these days are behind him now.  When Johnny Ringo recorded the first such solo with De Dannan, it had some novelty but bodhran solos have become an annoying cliché.

After a couple of good old fashioned Clare reels from Chris Droney, Andrew MacNamara counts the Lahawns into some fierce ceili band tunes from 1999.  It may be short but this track sums up the attraction of set dancing in Clare and is another highlight of the collection.  If this whets your appetite, check out his recent Live at Lenaĺs CD with the band.

The CD ends with some reels from Gerry ĹBanjoĺ OĺConnor.  People either love or loath Gerryĺs jazz progressions applied to Irish tunes.  Thereĺs no doubting his skill, but this does nothing for us.

This last remark aside, this is an excellent record and one might hope that if enough of us buy it, Volume 2 may be a possibility.  If youĺre ever planning to be in Ennistymon at the end of November book a ticket early.

While there are details of the CD on the club's website, there is no ordering details, so the best source is Custyĺs at www.custysmusic.com