Fiddler Maeve Donnelly should be well known to Irish traditional music fans.  Since winning three All-Ireland titles in the early '70s she has toured and recorded on both sides of the Atlantic, most recently as a member of Moving Cloud. 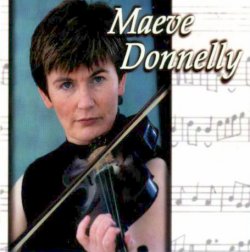 She guested on the recent Ronan Browne & Peter O'Loughlin CD and Peter is among half a dozen guest players on this CD.

Born just outside Loughrea and now living in Quin Co Clare, you would expect her to play with the slow rhythmic style reminiscent of say Paddy Canny or Paddy Fahy but her style is much more cosmopolitan.  She brings classical techniques like spiccato to tunes such as the Braes of Busby / Chorus Reel combination or Kitty in the Lane that perhaps the old boys from round Loughrea would not have thought appropriate.  When she duets with Peter O'Loughlin though, it is apparent that she has mastery of the East Clare style when she wants to apply it.  Much of the music on the CD is firmly rooted in Clare and Galway and the names of Clare fiddlers such as Seamus Connolly, John Kelly, Joe Ryan and Patrick Kelly are interspersed with references to Galway box player Charlie Harris, Dublin fiddle genius Tommy Potts, as well as players from Nova Scotia and Quebec.

The music is generally played at a fairly brisk pace and Maeve has a strong bow hand that drives the music along.  She breaks the rhythm up with some well executed rolls and bowed triplets that raise the excitement of the music.  The selections are fiddlers' settings or compositions of fiddle players, Reavy and Ryan for instance.  This allows Maeve to exploit her technique to the full, marking her out as a fiddle player's fiddle player.

Her treatment of The Braes of Busby is very interesting.  This is a tune very much associated with pipers and probably came into circulation through Seamus Ennis.  Tommy Potts picked the tune up and adapted it to his own style and Maeve has based her setting firmly on Potts while putting a few touches of her own into the tune.  The result is a setting far removed from Ennis but very pleasant and musically right for all that.  After playing the Chorus Reel, she reprises the Braes as if a couple of other ideas had just occurred to her.

The duets and small ensemble tracks with Dermot Byrne, Peter O'Loughlin, or her siblings Aidan, Declan and Mal are gathered in the second half of the CD and this ensure there is plenty of tonal variety as well as a good mix of tunes beyond the staple diet of jigs and reels.  Accompaniment by Geraldine Cotter on piano and Steve Cooney of guitar would be a welcome addition to any recording and the accompanists' contributions are up to the high standards you would expect, such that at times you forget they are there, only for the boost they give to the drive.  The only instrument that fails to convince is the cello on the slow air and the last set of reels.  Oddly enough the very simple cello lines under the duet with Peter O'Loughlin are effective, but the slow air Peggy's Dream sounds too much like a string quartet with Maeve double tracked on viola and fiddle with piano and cello.  Irish music rarely benefits from this classical arrangement.

As a self produced recording with assistance from Steve Cooney, this stands as a good showcase for Maeve's fiddling and whether you listen to study aspects of her technique or simply for pleasure this CD will be one than many will want to add to their collection.