It's hard to believe that Cara Dillon has only just turned twenty-five, but, in reality, it was only 1989 when she won the All-Ireland singing title at the age of just fourteen and a year later formed the aptly-named ”ige (youth) with friends Murrough and Ruadhri O'Neill from her hometown of Dungiven, Co Derry, and her brother-in-law Paul McLoughlin. 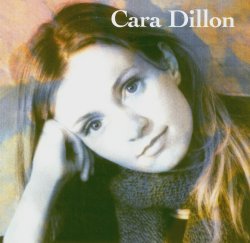 Cara's elder sister is, of course, Mary Dillon of Dťanta renown.  Cara left ”ige in 1995 to replace Kate Rusby in Equation, lasting just a year before heading off for pastures new with one of its founders, Sam Lakeman.

Her self-titled debut is essentially a collaborative effort, since Sam not only plays piano, harmonium and organ, co-wrote two of the tracks with Cara, and co-arranged, recorded and produced the whole kit and caboodle.  Why his name fails to appear on the cover is a mystery!  Recorded in Devon and Donegal, the album features eight traditional songs, including such well-known ones as Black is the Colour and Green Grows the Laurel, but by no stretch of the imagination could it be called a traditional album.  Cara grew up in the Irish tradition, and shares the same crystalline voice as her elder sister (who makes a welcome return here on harmony vocals)

However, while not exactly nor thankfully acquiring any rock intonations, some of the elaborations and nuances which once featured in her singing (as for instance on The Flower of Magherally-o on ”ige's Live album) have been smoothed away with the emphasis now firmly on purity of tone, though retaining the almost magical warmth which permeates both sisters' singing.

Equally, though always underpinning the melody, Cara and Sam's arrangements of the traditional material use instrumentation, with the exception of Luke Daniel's button accordion, more usually found in semi-acoustic rock bands with electric guitar, bass and drums often forward in the mix, the latter two especially on their self-penned Blue Mountain River.  Nevertheless, just one listen of the Derry ballad, The Maid of Culmore, where Cara is simply accompanied by piano and violin, should be enough to convince anyone that here is a consummately-skilled singer equal to Karan Casey in stature, a view reinforced by her astounding rendition of I am a Youth that's Inclined to Ramble, the album's closing track.

So, while using predominantly traditional material, this is essentially one of those borderline albums, not rock, not even folk rock, but drawing upon different strengths to present an alternative take on the songs.  It may not suit the taste of diehard traditionalists, but will undoubtedly take some much-loved songs to the ears of new listeners.