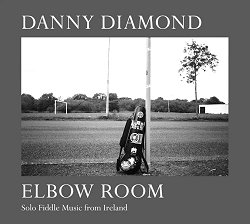 Unless you've closely followed Danny Diamond for the past 3 or 4 years, I think I can safely say that you'll have never heard anything like this music.  Not being a fiddle player myself, I've passed Danny's two previous CDs on to Phil Heath Coleman for review ... but from having heard a clip of the first track, I decided that I wanted a copy of it for my own pleasure; thus this review.

But I can't do better than to quote Phil for a moment:

Danny Diamond is one of those few musicians whose playing can conjure the listener to hear - and listen to - each and every individual note of a performance rather than merely the tune which he or she is playing in its entirety.  [His playing] is at the same time measured and meandering.  Hearing Danny Diamond's rendering of a familiar tune is like hearing it for the first time.  This effect he achieves in the same way as older traditional fiddlers: internalising a tune, de-constructing it, and reassembling it again on the hoof, note by treasured note, the cement of melodic convention dissolved in the process.

I mentioned having heard a clip of the first track, Maureen from Gibberland, which gave me a bit of a surprise, since it's a pretty rare song (in both senses of the word) and turns up on our own double CD From Puck to Appleby, sung by Bill Bryan, who got the song from his father, Martin.  It's both extremely funny and very rude!  The only full text of this song recorded from a traditional singer seems to have been a macaronic one (Irish and English) found in Co Mayo in 1936 entitled Mairín Ní Ghiobhalaín, which begins Bhí mise lá ag baint mónach (I was cutting turf one day).  There is also a fragment entitled Mairins Gibberlan, described as 'decidedly objectionable', included in the Greig Duncan Collection.  Danny bases his version on that played to him by Jimmy O'Brien-Moran, and coming originally from the 19th century Galway piper Paddy Conneely.

If you're looking for a good example of the 'measured and meandering' music Phil referred to, I think Danny's take on The Blackbird should do nicely.  He describes it as 'a fundamental building block of the Irish tradition [and] it dates back at least three hundred years.' and plays it here as a slow air.  Despite their single tune titles, most of the tracks here are actually sets of 2, 3 or even 4 tunes, and I'd like to let you hear a pair of reels from later in the Blackbird set.  They are fairly well known; The Four Courts/The Custon House, but 'hearing Danny Diamond's rendering of a familiar tune is like hearing it for the first time'.  I think you'll agree!

I'd happily give you sound clips of everything on offer here, but three long ones will have to do.  This CD really is a feast of quite extraordinary fiddle playing.  You can get it from: bandcamp.com or cdbaby.com