Anyone who bought a copy of the special edition of Sharon Shannon's last album, The Diamond Mountain Sessions, would have been well aware of the name Dessie O'Halloran, since his version of the country song, Say You Love Me, appeared not just once, but as a remixed version too. 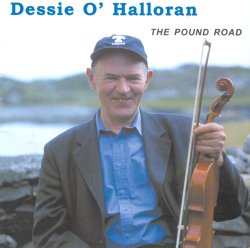 Learned from an EP by Hal O Browne and The Timberliners, Dessie's version was released as a single in Ireland and stayed in the charts for some time, peaking at number four.

Part of Dessie's success was, undoubtedly, due to his association with Sharon who appears on The Pound Road, an album produced by Dónal Lunny and recorded in Shannon's cottage in County Galway, and which features many of the best-known names in traditional music, including not only the aforementioned pair, but also Sharon's sister Mary, bass player Trevor Hutchinson of Lúnasa, Dervish's singer Cathy Jordan, Eleanor Shanley (formerly of De Dannan), and guitarist Jim Murray (now paired with Séamus Begley).  However, despite the strength of the cast, this is absolutely a case of the emperor's new clothes, an example of collective blindness (or, in this case, deafness) which can only lead to the conclusion that The Pound Road is the product of some kind of conspiracy to inflict abominable music on the Irish people ... although it's more far-reaching than that, since Dessie has been touring North America with Sharon.

The problem with this album is not that Dessie cannot sing.  The problem with this album is that Dessie does sing - and in a voice reminiscent of a goat undergoing rectal surgery.  Why the man has not already been charged and found guilty of crimes against music is a complete mystery.  He should be resting in Mountjoy with Dónal and Sharon as cell-mates, drip-fed a continual diet of The Pound Road and particularly its agonising rendition of Blue Eyes Cryin' in the Rain, where he sounds like the model for Vic Reeves' Club Singer.

For those unfamiliar with his name, Dessie, now in his early sixties, hails from the island of Inishbofin, erroneously described as being off the coast of 'County Connemara' in the sleevenotes of his only previous recording The Men of the Island (Topic 12TS 305) recorded with his brother in the 1970s.  That release came midway through a stint working in London where Dessie's fiddle could often be heard in the company of Bobby Casey and Brian Rooney.  (In typical fashion, a recent article on Dessie in Irish Music Magazine also suggested that he played with 'John Ball' and 'Martin Burns', presumably referring to accordionist John Bowe and fiddler Martin or Máirtín Byrnes - mind you, poor old Martin's name is also spelt wrongly in the sleevenotes to The Pound Road.)  He also used to enjoy regular success as a singer at the All-Britain championships which, in the light of this album, simply beggars belief.  Returning to Inishbofin in the mid-1980s, Dessie joined the island's céilí band with whom many visiting musicians would sit in, as well as playing at sessions on the island.  One such visitor was the young Sharon Shannon who recalls being "blown away by his voice" which suggest an alternative career for O'Halloran should Inishbofin ever become a danger to shipping.

If, after all this, any masochists are still keen to undergo aural torture (the 'mercy' words, by the way, are "natterjack toad"), they'll discover that this largely execrable album consists of the maudlin, the dreadful and the just plain dire, contrastingly spiced by some actually excellent instrumental sets.  Apart from Blue Eyes Cryin' in the Rain, the key contenders for the worst track are The Soldier's Farewell (ideal for a drunken wake) and I'll Fly Away (from the soundtrack of the film O, Brother, Where Art Thou? or, in this case, O, Dessie, How Could You?).  Really hardcore pain-lovers will thrive on a reggae-inspired version of Courtin' in the Kitchen and the closing track, a diabolical rendition of Will the Circle Be Unbroken - which might lead to gang warfare between the Carter Family and the O'Hallorans - where Dessie is joined by a choir of people who really ought to get out more in the evenings.  I know I should after listening to this dross.