Recordings of Danish traditional music are not exactly thick on the ground, in fact I know of no comparable records that are currently available.  It is then a pleasure to report that this CD, taken mainly from field recordings made by Danish Radio and individual collectors over the last forty years, is as enjoyable as it is unexpected.

Although accompanied professional street singers were not uncommon in some of the larger cities and a couple of examples are included, most of the singing here is in the solo, unaccompanied, unornamented, western European tradition strikingly similar to its French, English and German counterparts. 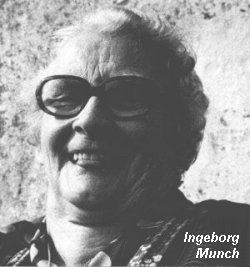 While the language of course will be impenetrable to many, the themes, if not the songs themselves, will strike familiar chords.  A knight fights his lover's seven brothers, a tailor falls asleep with a sow, a soldier returns from war to unknowingly discover his wife, while a man dresses his bride in a horse's skin with disastrous intestinal effect.  There is a cumulative song - where each verse relates to a part of the female anatomy and a very fine May song from Himmerland wishing luck to the farmer, his cook and household - and "lice and fleas" to the miserly.  This is all good stuff, with the former dairymaid Ingeborg Munch being the most impressive.

It will however be the music, mainly fiddlers or filddle-led small groups that will be the more accessible to non-Danish speakers, and a pretty impressive selection it is too.  The style would appear to be a synthesis of the highly developed virtuosity of Denmark's Scandinavian neighbours to the North and the unadorned dynamic punch from further south.  This is perfectly illustrated in the playing of the very fine Evald Thomsen, who along with Ingeborg Munch was taken on by the state as a folk music consultant in 1971. 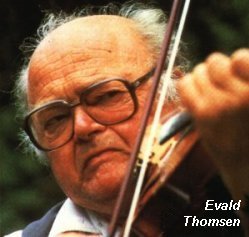 His wild yet lyrical style reflects a tension in his music that was apparently not far from the surface in his temperament.

There is an excellent 1930 recording from Frederik Iversen and Jens Andersen whose stately dual fiddling brings to mind contemporary Ozark music, a fine filddle and accordion duet which sounds distinctly Swedish, and a lovely old waltz played in unison by two fiddlers from Vendsyssel.

However it is two small dance bands that steal the honours and genuinely make the epithet "worth the price of the CD" for once ring true.  The three Nielsen Brothers - fiddle, piano and a drummer who doubles on an outrageously provocative trombone create wonderful musical anarchy on four short dance tunes.  The little band lead by fiddlers Frits and Soren Brinch, recorded at a dance, perform exquisite gentle gliding music. One of them described it as "like a ship pitching in the sea" and so it is - quite superb.

The tri-lingual notes (French, English and Danish) by Lene Hansen are brief but informative and hint that these recordings were made at a time when Denmark was in real danger of totally losing its folk tradition.  Has it?  I would personally be interested to know, for if it has, on the evidence of this highly recommended CD, the world is a poorer place indeed.