Appalachian traditional Songs and Singers from the Cecil Sharp Collection

I should say, at the outset, that I think this is a very fine book.  It contains a Preface by Shirley Collins, Mike Yates' 25-page Introduction, a short piece on Maud Karpeles from David Atkinson, Editorial notes on the photographs, the singers, the tunes and song texts by Mike, Elaine Bradtke and Malcolm Taylor.  Next is the main part of the book; the songs - or, as presented here, The Singers. 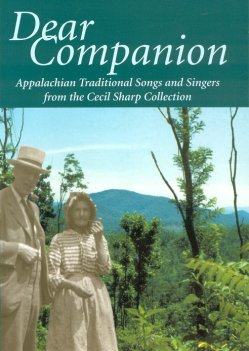 Each of the 40-odd singers has a photo (when there is one), place living or recorded, manuscript and photo refs, a quote or two from Sharp or Karpeles, and an editorial note - followed by the song or songs of theirs selected for this publication.  Finally, there are Notes on the songs, a Bibliography and Discography of Appalachian music, and an Index.  This leads me to the first of my very few grumbles about the book: why on earth put the Song Notes in a separate section when the obvious place for them is with the song to which they refer?

Regarding Mike Yates' Introduction: regular MT readers might suppose that this is little more than a rehash of his excellent Cecil Sharp in America article, published here in 1999.  Clearly, most of the facts are common to both pieces, as are a few of the quotations from Sharp's and Karpeles' diaries, but the Introduction's text has clearly been written afresh, and with a rather different intention.  The MT article presents an overview of Sharp's Appalachian collecting; the Introduction does so too, but its focus is on the singers whose material is presented in this book.  Moreover, much new material is included which illustrates Sharp's relationships with these singers - including, at times, their attitude to him.  Direct quotations from a few surviving letters to him from singers, and accounts from later collectors of what 'Sharp's singers' had told them about him, have the effect of really bringing his American forays alive.

One delightful story concerns a collector who went to visit one of Sharp's singers.  She wasn't in when he arrived, so a message was sent to her out in the fields.  Shortly afterwards she arrived, almost at a run, only to burst into tears when she saw that he was "Not Mr Sharp!"

While Yates makes it very plain how much Sharp (then in late middle-age and in very poor health) overcame in making what has been described as 'the best regional song collection ever made in America', he does not ignore the criticisms which have surfaced about his work and attitudes in recent years.  Perhaps the most telling of these concerns Sharp's assumption that most of what he collected in Appalachia was of 17th / 18th century English origin, and that his singers were of 'sturdy English yeoman stock'.  Yates points out that this is in direct contradiction of what many of the singers told him, and that Sharp himself had described the songs and ballads as being ones found 'in the older compilations of Motherwell, Kinloch, Walter Scott etc'.  Yet he made the assumption that they were English songs which had subsequently been lost.  He is also quoted as saying that the traditions of England and the English-speaking parts of Scotland were, to all intents and purposes, one and the same!  Maud Karpeles subsequently wrote that as much as one third of Shape's collection was based on Scottish material.

He also deals with Sharp's seemingly racist (or, at least anti-Negro) attitude.  He did, in fact, collect from two black singers - and got Sweet William and Lady Margaret and Barbara Allen for his pains.  Why then did he tramp miles across country to a hamlet where good singing had been reported yet, on finding the inhabitants to be 'negroes', promptly turn round and tramp back again?  Yates explains that, by the 18th century, the three communities (Native Americans, Blacks and White settlers) enjoyed considerable cultural interaction, and that the Blacks particularly (more that 13% of the population in 1910) were singing European ballads almost as freely as the Whites.

The one criticism he hardly addresses at all is that relating to Sharp's mediation of a working class culture for a middle class audience.  Perhaps he feels, as I do, that enough has already been said on this issue - and that it's all pretty obvious and understandable if you think about it for a bit.  We may regret it - but at least Sharp did leave very detailed and (apparently) accurate field notes of what he actually collected.  Unlike some later collectors (Bert Lloyd springs readily to mind), it's not too difficult to work out the differences between what his sources sang to him and what he subsequently published.

Like all song books, this one falls essentially into two parts; the songs and the Editorial input.  I hope I've made clear that, in this present case, the Editorial side of things is first-rate.  But I'm sorry to report that I'm a little less happy with the songs.  There seems to be no indication of any particular rationale for the selection of these particular 53 songs from the 1,600 examples he collected from some 280 singers.  The songs selected are:

When I asked Mike about this, he replied: 'I was asked to select 25 songs, as was Elaine.  We then compared our lists and found about 10 that we had both picked.  We then jointly sorted out what we wanted to include.  Most of the songs have been previously printed by Sharp, but, of course, these are now out of print.  I also included the two songs from Mary Sands because, a) I liked them, and, more importantly, b) because Kris Sands (Mary's grandson) said that he liked these two songs and would love to see them in a book.'

This response seems perfectly reasonable to me, so I guess that it's more a matter of differing tastes which leaves me slightly disappointed by some of the songs Mike and Elaine have chosen.  One must also bear in mind that I don't read music, so I'm only getting the texts and not the songs.  Now I'm as much a sucker for a good tune as the next man, but I do like a song to be about something - and I feel that a significant number of these aren't, really.  Phrases similar to '... this is in fact a selection of stanzas from at least three separate songs' crop up in the Song Notes just a little too frequently for comfort.

I suspect the truth of the matter is that I've been so convinced by Mike Yates' exemplary exposition of Sharp's excitement about the Appalachian material he was discovering, that I find it difficult to relate that excitement to a proportion of the songs selected for publication here.  Doubtless this is just a personal quirk of mine ... but I have no difficulty in recommending this book wholeheartedly to all MT readers.  Indeed, at only Ł14.99, I would almost recommend it if it contained no songs at all!

A part of the reason for this bold assertion lies in one aspect of the book I have yet to mention - the illustrations.  Scarcely a facing-pair of pages is without an illustration of some kind, and most of them are really splendid photographs.  In addition, we also get some facsimiles of documents (letters, notebook pages, etc) and two maps of where the collecting was done.  Most of the photos are by Sharp himself, and all reside in the estimable VWML at Cecil Sharp House, London.  Mike Yates explains that, although Sharp took photos on his 1916 trips, they seem to have gone missing from his collection.  Undaunted, and knowing that Sharp had sent pictures to several of the singers he met that year, Mike contacted a number of American newspapers, which printed requests for photos.  Astonishingly, several were recovered in this way!

As I said above - wholeheartedly recommended.