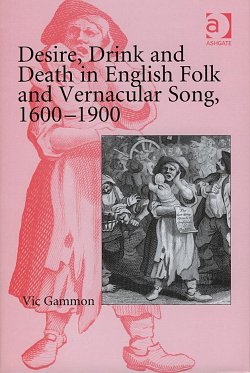 Here is a publication long looked for, come at last.  Never mind that drafts of many individual chapters have appeared elsewhere in earlier forms.  All have been revised, some extensively, and read now as if for the first time: 'about 60 per cent of the book is new material', we learn on page 3.  Of all modern-day scholars, Vic Gammon perhaps more than any other may truly be said to have altered the perceptions of anyone who gives more than a passing thought to the content and context of folk and vernacular song in England.  His frank analysis of concepts which seemed largely taboo to earlier generations of commentators are like refreshing gusts of wind on a summer's day.

The first third of the book is concerned with robust sex and seduction, with phallic and vaginal symbolism, and with metaphors for both male and female orgasm, as revealed in the texts of ballads and songs over a three century span from 1600, and, on occasion, earlier still.  All are grist to his mill, and he grinds that corn (nudge, nudge, wink, wink) with great skill.  Much of the second half is devoted to analyses of various far less agreeable and convivial matters, excepting, perhaps, the consumption of alcohol, sometimes to excess.  Aspects of death, burial, child abuse, abandonment by spouses and sundry other distasteful practises, are fully scrutinised and given their due.  Without doubt, this study has been greatly facilitated by the recent expansion of the resources available on the World Wide Web.  Indeed, when Gammon published some of the earlier drafts the Internet was merely a twinkle in a computer programmer's eye.  That so much invaluable material might one day become instantly accessible to researchers at the click of a mouse was a situation undreamed of.  The ability to view instantly tens of thousands of images of broadside ballads such as, for example, those in the keeping of the Bodleian Library, Oxford, is as much a marvel to be wondered at as the fabulous and outlandish creatures and unnatural natural phenomena 'documented' by a number of such broadsides.

The chapter on sexual imagery relies, in the main, on published texts.  Little is said, perhaps can be said, given the personalised psychological nature of perception, of the attitudes and beliefs of more recently-recorded carriers (all now long dead) of the older song tradition, in whose memory and on whose lips were maintained the cut-down descendants of this published ribald material.  And given the end date of 1900 as revealed by the title, we perhaps ought not to expect a great deal of coverage to be given over to the 20th century.  But some of these latter-day anachronistic bearers of a vocal tradition that, in common with practically all forms of traditional and vernacular culture (and more specifically, working-class culture) studied by the currently-active generation of researchers, had ceased to be relevant in its long-established social contexts by 1900, are identified by name - Bob Copper, Fred Jordan, Gordon Hall and such like - and an analysis in a little greater depth, however superficial, would have been welcome.  As it is, the problem is relegated to a footnote (fn.123 on page 42), with the disclaimer that the type of detailed cultural analysis undertaken by Ginette Dunn in east Suffolk (The Fellowship of Song, London: Croom Helm, 1980) would be impossible.  Gammon speaks, for example, of the well-known song The Nutting Girl, declaring its text to metaphorically describe, in part, the sex act and orgasmic culmination (pages 92-93).  But what exactly, one wonders, was passing through the mind of Suffolk singer Cyril Poacher when performing it (obviously frequently, given the number of times it was collected from him), or indeed those of his fellow imbibers in Blaxhall Ship who joined lustily (no hidden meaning intended) in the chorus on numerous occasions, one (or more) of which was captured on the Lomax film?  Or what of the morris dancers at Abingdon (was Berkshire, now Oxfordshire), a tradition whose existence was first noted over two hundred years ago, who still use the chorus as a preamble to performing the dance of that name?

'Fox' / 'box'; penis / vagina.  This is the type of metaphor explored by Gammon, though many of his cited examples are more obvious than this one.  But, having been an honorary member of one of the Abingdon sides for nigh on three decades, and playing for them when their regular musicians are indisposed, I've never detected a hint of awareness of any hidden meaning in the words.  Indeed, I often sing the jingle myself while playing that introduction, and am in fact usually thinking about the impending dance and tune and rhythm and melodic structure.  Sometimes, as the saying goes, 'If it looks like a duck, and quacks like a duck...'

As an aside, ironically (and appropriately), while reading the section on 'hidden' sexual meanings in folk song I was working briefly in Standlake, Oxfordshire, just a couple of stone throws from where The Soldier and his Lady (analysed on pages 51-53) - 'Then out of his knapsack he drew a long fiddle / and he played to her such merry tunes that she ever did hear' - was collected by Peter Kennedy from the Cantwells half a century ago.  The final time, I believe, that the song was collected in the oral tradition from an informant born prior to 1900.

The final chapter takes the intriguing form of an autobiographical essay dealing with the author's own childhood and early teenage experiences of, and engagement with the very material with which he has just filled the previous two hundred pages.  His memory seems remarkable, although various forms of music and song transmission were apparently a family-based experience.  'At thirteen,' he tells us, 'I attended my first folk song events.' (page 232).  These youthful encounters gave him food for thought regarding the material then in oral transmission.  'Where was I situated in relation to this material?', he queries.  Three years his junior, but similarly a product of an urban council estate milieu, I have fewer memories of the cut-down older ballads he recalls, such as Green and Yeller (Lord Randall) or Old Mother Lee (The Cruel Mother), although having been reminded I think those were also within my ken.  But by the time I attended my first folk song event, at age twenty one, those items were a deeply-buried feature of childhood.  Parodies were much more the order of the day, I recall, though no equivalent to the mildly risqué text given on page 233 using the My Old Man's a Dustman template springs to mind.  The theme song to the Popeye cartoons featured extensively, however, and were part of that covert, conceal-from-adults-at-all-costs culture which Gammon implies in passing on page 234.  In retrospect:

though at age ten or so I think the reverse was perhaps true, since I knew what having a piddle involved.  Not to argue in any way that Popeye is a linear descendant of earlier male protagonists with musical instruments in their knapsacks, but what is interesting about the second of these jingles is the use of the word 'fiddle' in the exact same manner as Gammon argues for phallic representation in Chapter 2.

In common with many other contemporary social historians and folklorists, Gammon sees clearly the many pitfalls of bringing modern-day perceptions and ideology to bear on cultural artefacts which originated and were perpetuated within a society which is practically alien to us, and which it is nigh on impossible to get a handle on from the fragmentary evidence which survives.  All of us who research past centuries have the same problem.  Most recently, in yet another Ł50 volume from this same publisher written by another member of the Folk Music Journal Editorial Board - Mike Pickering's Blackface Minstrelsy in Britain - review copies of which were sent out just a fortnight before the time of writing this, expounds the pitfalls in even greater detail.  And I personally refer facetiously to my own 'Ribbons, Bells and Squeaking Fiddles'.  The social history of morris dancing in the English south midlands, 1660-1900 (Hisarlik Press for the Folklore Society, 1993; republished as a CD ROM by Musical Traditions, and available here) as 'my science fiction volume,' in acknowledgement of the inevitable overlaying of my own values and preconceptions on this alien cultural landscape.  Gammon likens his research to 'explorations': 'it suggests a strange country, discoveries, unexpected visions and connections' (page 1).  I would take a less positive view, and stress the fact that, as explorers we are merely able to observe what may superficially be seen (in this instance the primary sources), and can never get beyond that visual with any degree of accuracy.  Often it appears more like a mirage in a desert of partially-remembered or superficially-documented actuality.  I am able see the exposed tip of the iceberg (assuming I'm in the right location, and we historians aren't, by any means, always even there) but I'll never be able to view the ninety per cent which is covered by sea water.

But Gammon does a damn fine job with the evidence available.  You are unlikely to find a more ground-breaking, thought-provoking and challenging publication on folk and vernacular song this year, or perhaps for some time to come.  An essential read.