Traditional songs and tunes collected by Gwilym and Carol Davies 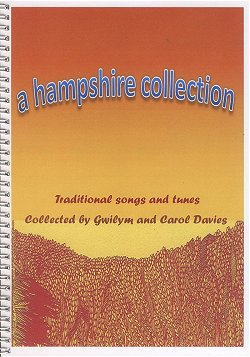 For over 40 years, Gwilym and Carol Davies have researched and recorded 'source singers' in Hampshire, Gloucestershire, the USA and Portugal and presented their collections in books, magazines and lectures (including a recent paper presented at the Library of Congress in Washington).  I have had the pleasure on a couple of occasions of hearing them lecture and been impressed not only by their knowledge but also their very evident enthusiasm for their subject.  In 1974, they published a small book of 10 songs, 2 tunes and a mummers' play which they had collected in Hampshire.  Since then, they have revisited some of their sources and recorded fuller versions of some songs.  They also met up with another Hampshire collector, Paul Marsh, from whom they got further material and background information.  The results of these later researches are included in this new edition.

They point out, in their introduction, that most of these songs are not confined to Hampshire and, indeed, they chose not to include other songs - such as All Jolly Fellows That Follow the Plough or The Young Sailor Cut Down In His Prime - that were found in what they considered to be 'a fairly standard version'.  Such songs, they say, were popular in Hampshire as elsewhere, 'but the versions were very similar to those collected anywhere in southern England'.  This collection now includes 16 songs (plus the words of an unsung piece); 9 tunes and the mummers' play in a 33-page, A4 spiral-bound format with some nice illustrations by Kathie.  The tunes in MIDI format are published on their website: http://www.forest-tracks.co.uk/hampshirevoices/pages.hampshirecollection where you can also find links to recordings by Gwilym of most of the songs.

We can assume that the songs in this collection were deemed to be sufficiently different from 'standard versions' to be of interest and indeed, there seem (to my amateur eye) to be some intriguing variations from versions I have heard elsewhere.  For example, there's a version of Three Men Went a-Hunting that, Gwilym says, is similar to one found in Gloucestershire and is quite similar to the version I learned in Yorkshire in the 1950s - but this one has a chorus - "For 'twas half past five in the morning in the middle of the night.  The ducks began to quarrel and the pigs began to fight ..."

There's two versions of An Acre of Land, from villages less than 20 miles apart, that make for interesting comparison; Box on Her Head; The Butcher Boy; Fathom the Bowl with an interestingly different tune; The Fox (aka Daddy Fox); Henry Morton (usually known as Henry Martin); I Don't Care If I Do (which has spoken lines in the verses); I Once Loved a Lass (a 'Night-Visiting Song'); Jim the Carter's Lad; John Barleycorn; (What Is) The Life of a Man; The Sailor Boy; The Scarlet and the Blue; a page of local beliefs/superstitions and very brief biographies of Gwilym's grandparents; several tunes collected by Paul Marsh (with somewhat longer biographies of two musicians) and a short script of a mummers' play from Hartley Wintney.  This script was incomplete so was augmented from other local sources (as were several of the songs) including texts from Dorset, the neighbouring county.  All these augmentations are differentiated by the use of regular and italic fonts so it is reasonably easy to see which words the original singer sang.  However, the sources of these augmentations are only identified as 'local' or 'from Dorset'.

There's also a few rarely-found songs, such as Bonnybrook Fair, sometimes known as Glass and Old Mother Bottle Glass; The Shooting Gallery (this is claimed to be the only full version recorded from a traditional singer) and The Death of John Lee, a piece of dreadful doggerel, without a tune, about the murderer known as Babbacombe Lee who was saved from hanging on three occasions when the trapdoor failed to work.

I'm afraid serious students of Folk Song will be frustrated by the somewhat limited background information provided.  Apart from Paul Marsh's biographies of two musicians there are very brief biographies of three singers.  (Though I was amused to see three identical pictures of Jack Oakley on commercial postcards supposedly from "Darzet"; "dere ol' Deb'n" and "Zummerzet"!  No mention of Hampshire!)  There are a few sentences about each of the songs and a slightly longer piece about the mummers' play.

Singers and musicians wishing to explore the Hampshire repertoire may find this small collection a useful starting point.  Several of the lyrics and tunes are noticeably different from commonly-known versions and it is extremely useful to musical illiterates like me to be able to download the tunes in MIDI format from the website.  But, in my opinion, it would be even more useful if it contained information such as lists of each singer's known repertoire or, at least, a list of those 'standard version' songs that the editors decided to exclude.

A final minor complaint - the use of a space before every apostrophe which means that words such as "o'er", "it's" and "Soldier's Cloak" appear disjointed as "o 'er", "it 's" and "Soldier 's Cloak".  This may be a feature of the font used but it does not make for easy reading.