Bob Davenport and The Rakes

For a lover of English music and song, one of the depressing aspects of a magazine like this is that most of the performers of that genre discussed within it, are already dead.  Since MT's rebirth as a Net publication, I have been looking forward to the day when I would be able to review a recording by what might be termed a 'second generation' traditional performer on exactly the same terms as I use for the older ones.  Inevitably, quite a number of such potentially reviewable recordings find their way to our door.  But upon closer inspection, they reveal themselves as much more products of the revival than of the tradition and, as such, we have felt it unfair to attempt to apply the same criteria - and have decided not to review them here for that reason.

So it is a pleasure to find that the present Fellside CD falls well within our scope - and I fervently hope that it will not be the only such example, and that further work of this sort will reach us from other record companies, too.

Although Fellside did not send us any sort of press release, rumour has it that this recording was intended as an 'actuality document' of the sort common among recordings of traditional performers.  'Put them in a studio, give them a free hand to record what they want, and then do your best with the resulting tapes' might be the simplest description of the process. 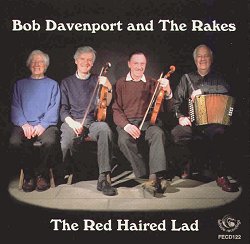 No overdubs, guest soloists or overt use of sound enhancement techniques.  The liner notes hint as much: "No frills, no gimmicks, just plain good playing and singing."

This is admirable, in my opinion - though it does beg the question of exactly what Mike Harding, as 'Producer' had to do? - other than to take a really lovely photo of the band and the White Haired Lad himself.

Rumour also has it that Bob was suffering from a cold/sore throat at the time of recording, and the evidence is here that he was certainly not at his best for quite a number of the tracks.  Whatever the truth of that, there are also a few tracks where he sounds acutely uncomfortable with the pace and/or key of the performance.  I would have hoped that one of Harding's responsibilities, as a good producer, would have been to put pressure on the record company to allow time, at a different date, to re-record those songs which fall so noticeably below the standard of the rest.  Perhaps he did, and Fellside resisted?  For whatever reason, I have to say that I find this a flawed documentation of the Davenport/Rakes combination, and am surprised that the company was prepared to release it in its present form.

It must also be said, of course, that Bob and the Rakes are not traditional performers: they do not lack self-awareness; they are not unfamiliar with the record-production process; they've had 40 years experience of the business, after all.  Thus, unlike the case with many traditional performers, one cannot reasonably lay the full blame for this CD's shortcomings at Fellside's door.

The minimal sleevenotes tell us next to nothing about the singer or the band - both of whom are described as traditional - assuming perhaps that both are too well-known to need introduction - and absolutely nothing about the songs or the music.  This is a pity, since there are some interesting inclusions here.  Alongside the expected Blarney Stone, Star of the County Down, Stone Outside Dan Murphy's Door or Wealthy Squire, we find the Green Banks of Yarrow - the sort of ballad Bob often sang in his youth, but pointedly neglected in his middle years,

seeming to prefer the 'realism' of more 'working-class' material.  Durham City (Banks o' Wear) makes a pleasant and relaxing alternative to the better known Mormon Braes (sound clip) and, for me at least, Hallelujah I'm a Bum came as a complete surprise.

The music of The Rakes is a delight throughout, and the superb Greenwich Park is probably my favourite piece of the lot. (sound clip).  I always find it strange that such a small percentage of their material is English, particularly given Reg Hall's close connections with so many English traditional players and their music.

The choice is theirs, obviously, but the result is that only one set (I think) on the record comes from home - Three Around Three coupled with a very nice version of the Flowers of Edinburgh. (sound clip).

Sadly, and despite their long partnership, I feel that they are far less successful as an acompanying band for Bob.  I am a Rambling Man becomes more of a race to get all the words in than a song, and Star of the County Down combines similar haste with being pitched at least a tone too high, as is Goodbye Mick, which completely floors our hero in the reprised last line.

There's no doubt - Bob Davenport is still a fine singer and, sore throat or not, was capable of some great performances during this recording session.  Moving Day (sound clip)

certainly manages to tug at all the right heart-strings, and the aforementioned Stone Outside Dan Murphy's Door (sound clip) is a perfect example of Bob and the Rakes at their best together.  It's a great pity that too many of the other tracks don't come up to their level - one or two even sounding as if band and singer might never have worked together before.