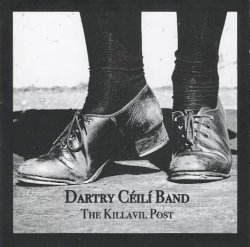 Oh yes!  I'm immediately reminded of the first time I heard The Bismarcks ... I knew they were wonderful, though without any obvious reason.  They just sounded fresh and spirited - and 'right'.  The Dartry CťilŪ Band offer the listener exactly the same experience.

They come from Counties Sligo, Mayo and Roscommon and have just released this, their first recording.  The band formed in 2007, and in August 2009 they won the All-Ireland Senior CťilŪ Band competition at Fleadh Cheoil na h…ireann,

and being only the second CťilŪ Band to bring the title West of the Shannon since 1953.  The 11 members play flutes, fiddles, concertina, accordion, piano and drums, and play with great energy and drive.  Listen to Joe Derrane's March (sound clip).

There's a nice selection of tunes here, including some polkas, marches, hornpipes

and a barndance amongst the reels and jigs.  I must applaud the inclusion of the wonderful Pearl O'Shaughnessy's Barndance, as it's a tune I've been meaning to learn for ages ... now's me chance! (sound clip).

In addition to the dance tunes, there are two songs on this recording, Far Away in Australia by Noelle Carroll and The Piper by Cian Kearins.  I recall the first of these as sung by the delightful Christie Hennessy back in the '70s, and Noelle has a lovely voice and sings it well.  However, I think it's sung here for dancing - fast waltz, straight and strict-tempo - which doesn't work all that well on a CD for listening to.  It would be better with a looser treatment, I think.  Cian Kearins' The Piper by contrast, is definitely for listening to - a very amusing piece, extremely well performed.

This is a terrific record - I've been recommending it to all my friends, and I now recommend it to you!  I'm not sure who stocks the CD, as it's an 'Own label, no number' item, but you can get it from: www.dartryceiliband.com/cd/ for Ä16 inc P&P.