Less than two years since there last album, Think Before You Think, here is Danº's third release and one that marks yet another personnel change in the band's line-up. 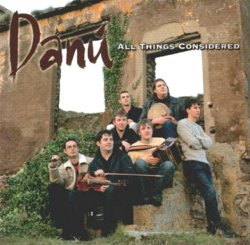 Though he appears on almost all of the album's fourteen tracks, fiddler Jesse Smith had already departed by the time of this new album's release, a fact acknowledged in the liner notes and by the appearance of his replacement on the cover.  The newcomer is Oisin MacAuley, described in the bands' typically tongue-in-cheek manner as the 'Donegal sensation'.

Those already hooked by Danº's previous albums and the band's staggering live appearances will be pleased to find that little has changed, with one exception, to which I will refer below.  Omnipresent is the astonishing versatility and exuberance of the band's members, ever tempered by the desire to allow the tune to speak for itself.  The musicianship remains of the highest order with Tom Doorley (flutes and low whistles), Jesse Smith and Benny McCarthy (accordion and melodeon) to the fore while 'the big man', Donnchadh Gough, is allowed to wield his uilleann pipes to telling effect on The Wee Lass on the Brae.  His bodhrÃn, alongside Eamon Doorley's bouzouki and mandola and Noel Ryan's guitar, forms a backing which is never allowed to dominate the proceedings.  The net result is that Danº remain some distance apart from (and several shoulders above) the majority of their contemporaries, especially the many bunches of heads-down-hammer-out-the-reels-merchants.  This, after all, is that elusive butterfly of all rarities, an Irish band voted 'Folk Band of the Year' in the BBC's awards!

As before, the band have continued in their quest to dig out less familiar tunes and invest them with new life.  So here you'll find the reel The Old Pensioner, previously recorded by the long-defunct London band Le ChÕile or Michelle O'Sullivan's, a reel from the concertina player of the same name, while Oisin contributes one from John Doherty's repertoire, the King George IV strathspey.

The major exception mentioned above lies in singer CiarÃn Æ GealbhÃin's song choices.  Two songs are very familiar, The Wee Lass on the Brae and Easy and Free (sometimes a.k.a.  Jock Stewart).  Other songs remain less so and include a gem from Elizabeth Cronin's repertoire, Uncle Rat, and two in Irish: An DÕirc, the tale of a wandering vagabond; and, Idir êird Mhµr Is Eochaill, which comes from the singing of èibhlis Bean de Paor from An Sean Phobal, and makes this listener, at least, wish that he would sometimes be recorded unaccompanied.

Overall, All Things Considered possesses a somewhat lighter feel to its predecessors, but perhaps this is a sign of mellowing age - some of these lads must be at least twenty-five by now!