Cumar is a week-long traditional music school held annually in Connemara, and conducted entirely in the Irish Language.  In the official concerts at the 1999 gathering, a large number of previously unrecorded singers and musicians featured alongside more established performers.  This recording gives them an opportunity to reach a wider audience for the first time.  The strategy behind this project is admirable. 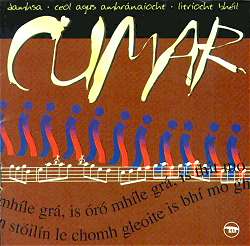 Asking a bunch of music students to deliver a recordable performance by the end of their summer school must concentrate their minds wonderfully during the preceding week.  So whatever the quality of the product, the process leading up to it is valuable in its own right.  For the participants themselves (and their friends and families) the record is a reminder of how much they have achieved so far - and how much they still have to learn.  And in a decade or two, when some of these artists have gained wider recognition, specialist record collectors will regard this early flowering of their talents as an essential acquisition.

For less committed listeners, however, this is still a record worth hearing.  The zest and verve shown by all the participants more than compensates for occasional infelicities (which could hardly have been avoided in a live concert recording).  Some of the pieces on blown instruments (and a few songs) suffer slightly from awkward phrasing, suggesting a lack of breath control brought on by pre-concert nerves.  Some of the fiddle tunes have a vinegary tone, with occasional notes that are downright sour (also attributable to nervous tension).  And a few performers seemed to be labouring too much over their grace-notes - perhaps tending to treat them as technical exercises, rather than letting them flow spontaneously out of the logic of the tune itself.

But these are only minor blemishes on a very listenable CD, where every performance shows considerable promise, and some display a substantial level of achievement.  Neansaí Ní Choisdealbha delivers her flute pieces with real authority, Micheál O Ruanaigh's harp playing combines precision with expressiveness, and Pádraig Ó Mianáin's delicate phrasing and judiciously placed chords give his accordion jigs an irresistible lilt.  These are already assured and accomplished players - but all the artists featured here have real potential, and may well produce greater things during the next decade.