The Cullivoe Band with Willie Hunter

The mention of the word 'Cullivoe' brings some very precious memories of six days spent in the company of that very special band in 1972.

Peter Cooke from the School of Scottish Studies at Edinburgh had been doing some sterling work during these years, recording the wide variety of Shetland fiddle styles still to be heard at that time.  His hard work and enthusiasm had been the inspiration for the band leaving Shetland for the first time.  Some band members had never left their own island before, never mind the Shetlands; some had never seen trees ...  The logistics of taking nine men and one woman from a remote interdependent crofting community at the very north of Britain's second most northerly inhabited island - cows still had to milked, stock fed - were well nigh impossible.  However, Peter was determined that this band were going to be heard in Scotland and in the end the mammoth task succeeded.

Hearing the band in the opening concert at the Kinross TMSA festival, the audience was immediately aware that here was something very special. 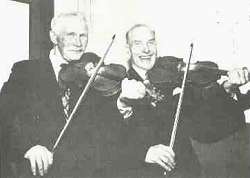 Fronted by two admirably sprightly figures, the 82 year old Bobby Jamieson and the 78 year old Willy Barclay Henderson, the seven fiddlers played in a remarkable homogeneous manner, a lilting bounce to their playing, and such a quiet sound for seven fiddles that it had the audience bending forward on their seats.  The accompaniments were provide by Bobby's grandsons, Victor and Gordon on bass and electric guitars.  You want variety?  Forget it!  This band played only reels, nearly all local to their area, but when they played Speed the Plough and Soldier's Joy the pared-down speeded-up versions made them almost unrecognisable.

I managed to talk to them after the first concert and mentioned that my grandfather, dead before I was born, was born on the south end of Yell.  That was enough!  We were included in everything that they were doing for the weekend, including a wonderful session where they were staying on the Saturday night with just the Cookes, Tina and myself and the couple who owned the house along with the band and them attempting to teach us the six hand Shetland reel late into the night.  My uisgebeatha-befuddled brain just allows me to remember that Bobby started to sing very late in the night and that it was very good, though all I can actually bring back is a rattling Boston Burglar - not the Delia Murphy waltz-time version.  (Did anyone record Bobby Jamieson's singing?)

After Kinross we followed them to concerts in Perth, Fife and eventually Edinburgh and a School of Scottish Studies recording session.  before their return home.  The air in 'Auld Reekie' was considerably cleaner by 1972 than it had been in my boyhood, but it was still too much for throats used to air of island purity.  None of them could speak a word.

I have checked back on all my old recordings of the Cullivoe band to see if memory is playing tricks, but there are all the qualities that excited at the time; the driving but somehow underplayed melodies with bags of open string droning above and below the tune (bottom fiddle string tuned to A).  If I had not had the experience of the 1970's band, I would have found the current album ordinary.  As it is I find it disappointing.  Victor and Gordon Jamieson are still there after all these years, Victor still playing bass and Gordon playing one of two accordions.  There's also piano and drums, but no fiddler from Cullivoe and none of the totally exciting and distinctive style and repertoire that engaged me when I heard them.  Perhaps none of the Cullivoe fiddlers felt that they could play in the company of the great master ...?

When the history of fiddle playing in the British Isles in the twentieth century comes to be fully considered, there will have to be a special place for Willie Hunter. 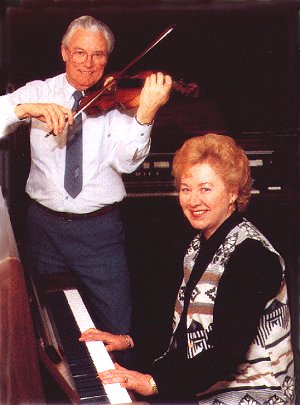 The Aly Bains and Martin Hayes may have left their homes in traditional music areas to spend their lives spreading the traditional music gospel so they have the names that will register with a wider audience.  Willie Hunter stayed at home, worked his forge and carpentry lathes, sold insurance and did a half a dozen other small jobs to make a living and he played for dances, broadcasts, records and a great deal for his own pleasure.

The first record of traditional dance music that I bought was when I was still at school.  'Shetland and the Fiddle' was an EP on the Thule label by Willie Hunter on fiddle with Ronnie Cooper on piano.  Even in this (circa 1960?) recording Willie sets his stylistic stall out, a strathspey and reel by Scott Skinner, a slow air, some Irish reels and a set of modern Shetland reels.  Later I had access to a number of other private recordings and to information about the man through the Brighton fiddler, Robin Arzonie, who made pilgrimage trips to Shetland to meet him.  Willie was no antiquarian.  Generally, he preferred and played the modern tunes to the traditional ones, the quality of the tunes was what he considered important; his greatest admiration was for Scott Skinner.  Similarly, he had little time for the promotion of an exclusively Shetland style and repertoire as advocated to an extent by Tom Anderson.  The Shetland repertoire was just part of the Scottish repertoire which in its turn was part of something bigger.

This is reflected in the range of tunes that are played on this album; reels and waltzes from Canada, waltzes from Norway, lots of modern Shetland reels, marches and waltzes composed by a number of fiddlers, including his own tunes, alongside some standard reels, jigs and marches such as Jamie Allen and The Balkan Hills.

As always the real class of Willie's music is revealed in his exquisite playing of slow airs with a beauty of tone and timing as flawless as ever. (sound clip)  The amazing but sad fact is that we are listening to a man in the final stages of cancer.  He was to die eleven days after he made this twenty-recording session, all in one take only, that this album is selected from.

He probably had no business being in a recording studio at all, but even so there are occasional snatches of Willie playing at something like his creative best as on the Canadian tune, The Crazy Creek Reel - (sound clip).  If you area real Willie Hunter fan you will want this album, for its historic interest and its best moments, but if you want a greater insight to Willie at his best, try some of his earlier recordings.  The two with pianist Violet Tulloch on Greentrax are still easily accessible (CDTRAX 105 'Leaving Lerwick Harbour' and CDTRAX 144 'The Willie Hunter Sessions')

As for the rest of the Cullivoe band, well, the passing of time has sadly but inevitably meant that they have given up something unique and distinctive and joined the mainstream of what is heard in Fiddle & Accordion clubs.  They are good, but they have become indistinguishable from the mass of Scottish country dance bands.  Now, you might want to go to an Irish Ceilidh dance or to some of the current southern English dance bands events to listen to the band as well as to dance, but whilst the Scottish dance bands play great functional dance music, few play good listening music and the Cullivoes are now in that category.  I've mentioned some of Willie's other recordings - try to hear the Cullivoe Band on 'Shetland Fiddlers' (Leader 2052) or 'Shetland Fiddle Music' (Tangent TNGM 117).  This latter one is re-released on CD by Greentrax as CDTRAX 9004.