I recently reviewed a CD of vintage Spanish recordings in these pages, and remarked on the way that the music it contained reflected both the geography of Spain, and the successive migrations to which the landscape has been subject.  Croatia, with its mountains, plains, sea coasts and islands, and its long history of migrations, from the days of Turkish occupation to the recent tragic events arising from the breakup of Yugoslavia, is another country whose music is both conditioned and made very various by geography and history.  Many cultures overlap within its borders, and contrariwise, there are very distinctive regional characteristics to Croatian music.

This CD is drawn from material held by the archives of Croatian Radio, and recorded in the field and at festivals between 1958 and 1993.  Its 39 tracks are organised regionally: North and North-West, East, Central, and South Croatia, with the latter sub-divided into the Hinterland and the Adriatic Coast and Islands. 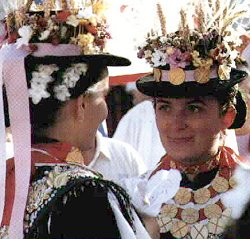 Given this system of organising the music, it is most unfortunate that the booklet does not include a map showing these regions and the recording locations.  It is also a pity that the notes are on a track-by-track basis, with no general overviews of each region's music.  This means that it is hard to grasp a picture of the musical culture within which the musicians are working, and of which each performance is a particular manifestation.  The booklet is also extremely stingy in its use of photographs, that on the cover being the only one.

The ever-invaluable New Grove states that the various folk musics of Croatia are most readily distinguished by differences in "tonal relationships, modes and forms of partsinging", and goes on to describe six styles of folk music: narrow-interval, diatonic narrow-range, the final 5th style, major partsinging, unison singing in a wider range, and sub-pentatonic.  What is striking, and very evident from the CD, is the fondness of Croatian singers for partsong; the opening solo love song, Cveti Mi Fijolica (Bloom For Me, My Violet), with its wistfully wavering, parlando delivery, is both the most beautiful performance on the disc, and very untypical of it.  There are some dialogue songs, like the glasnice sung from hill to hill, which have the 'high, lonesome sound' of black American field hollers; but the majority of examples are performed by vocal groups of various sizes, often in leader and chorus format, and the variety of styles heard is striking.

The final 5th style apparently developed in Eastern Croatia at the end of the 19th century,

and spread to other regions early in the 20th.  A good example is the svatovac, or wedding song. (sound clip)  It would be interesting to know what brought about the introduction and popularity of this final 5th style.  One might speculate that the increasing presence of formal musical training, and the formation of trained choirs, had something to do with it; but the style as heard on the CD is certainly a tradition-based one, as may be heard in the way that it has changed as it migrated from Eastern Croatia to other parts of the country.

More haunting still, with a chromatic tonality and anguished delivery that accords closely with their subject matter, are the four songs by displaced people from south Croatia, recorded in Zagreb in 1993: in translation, their titles are Sister, Sing Those Old Songs Of Ours, All The Villages Have Changed Colour, There Is No Song Nor Singing, and They Ask Me, Where Are You From, Kid?  Also from south Croatia, and dominant in Dalmatia, is the much smoother klapa (male chorus) style, sung by four to eight singers in major modes and with functional harmony.  The style originated in towns in the last century, and spread to the villages.  Annotator Dr Grozdana Marosevic also notes that klapa underwent a revival from 1967 onward, under the impetus of a festival established in that year,

so it would appear that, as in most other parts of the world, folk song in Croatia is often surviving through preservation and revival, rather than as a functioning cultural component.  I would like to think, however, that this manic noise is still used to relieve the tedium of harvesting. (sound clip)

Alongside the vocal tracks are a number of instrumental items, some played to accompany dances, some played for private or public listening.  Again, it is striking how fond Croatian musicians are of music in parts: a Pastirska (Shepherd's Tune) is played on a double flute, both tubes of which play melody; the mih, a bagpipe with one reed and two chanters, is also used to play two-part music;

and the shawm-like sopila is usually played in pairs, one large and one small.  The ensemble sound of two sopila and mih is rarely heard, but enables the economic use of a sound clip in illustration.  Some of the other music is very reminiscent of that heard from the Hungarian gypsy musicians of the Transylvanian Heath in Rumania, as for instance the drmes played by two violins, bowed bass and bugarija, a version of the tambura (lute); here, the tambura sounds less like the clichés of Greek restaurant music than it sometimes does when heard solo, or as a lead instrument in the tamburica ensemble that seems to be most commonly used as an accompaniment to vocal music.  Other instruments featured are variants of the tambura, like the dangubica, with its four equally tuned strings; the lijera, a three stringed bowed lute which is clearly a version of the Greek lyra; and various forms of zither, including the interesting citura, a bourdon zither with seven drone strings, and three melody strings, damped with a stick.

I am glad to have been sent this CD for review, for it presents a richly varied musical soundscape.  Given, however, that music is a lot more than the noise it makes, I remain disappointed by the presentation, which alludes briefly to geographical, historical and cultural influences and constraints on the music, but fails to explain or explore them adequately.