The Crehan family of County Clare is one of the best known if little recorded families in Irish traditional music.  The modern patriarch of the family was Martin "Junior" Crehan (1908-1998) a fiddler, storyteller and singer of immense reputation.  Junior was one of a great many musicians who practiced their art in their own locality and community at a time when traditional music was not highly regarded and traditional players were rarely singled out for commercial recording. 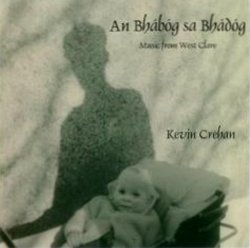 A few recordings exist here and there, mostly from the 1970s onwards when he was already well into his sixties.  Junior Crehan was noted as a source of rare tunes and he is crediting with composing a great many himself.  His best known compositions are probably The Mist Covered Mountain, Caisleán an Oir and The Knotted Chord, but many others have worked their way into the common repertoire via recordings by John Williams, Mick O'Brien, Martin Hayes and others.

His son Tony and grandson Kevin tried to put some recordings of Junior together before Tony's untimely death in the early '90s but they were never satisfied that the recordings captured the spirit of Junior's playing.  Extensive discussions of settings and sets of tunes to go into these recordings were ultimately not wasted.  This recording by Kevin of his grandfather's music is based largely on those discussions; sets which Junior thought illustrated a certain progression or contrast between tunes have been reproduced here.  In effect this is as Junior might have recorded the music.

The music is presented perhaps as Junior might have chosen too, quite starkly on solo fiddle throughout.  The absence of any accompaniment probably brings it closer to the natural setting of traditional music as Junior would have known it, particularly in his younger days.  The triumph of the recording is that the execution of the playing and production is so good that you don't notice that there is no guitar or piano.

Just over half the tunes on the CD are compositions accredited to Junior and several others are closely associated with him.  The way Junior composed a tune is well illustrated in a couple of selections here.  Junior was quite content to adapt or amend an older tune to make a new tune.  The hornpipe The Stack of Rye is clearly made from The Green Fields of America, a tune which already exists as both a jig and reel and is also played as a slow air, which Willie Clancy played as Molly Brannigan.  Junior was a particularly good writer of hornpipes it seems natural that he would have made the set complete with this tune.  Another example of obvious heredity, is the jig The Sheep in the Boat which Junior made from the old air Anach Cuain.  Here Kevin plays the air then the jig made from it.  This jig has become widely played, often under the name Anach Cuain, and it speaks volumes for the quality of a composer when their music is taken on and regarded as traditional.  Most of the other tunes have close associations with Clare and only a couple of tunes have origins further afield such as The Pigeon on the Gate (played in two different settings) and The Daisy Field.

Kevin's fiddle playing is true to the West Clare style and is particularly reminiscent of the few commercial recordings of Junior.  Listening to him play The Drunken Guager and The Luaithreadán's Jig you might almost think it was Junior himself playing.  The pace is leisurely and rhythmic.  All the selections are true fiddle tunes, and Kevin shows a great command of the fiddle with well executed rolls and tight triplets.  All the tunes are given a good airing each being played three or four times over, with subtle twists and variations in each repeat.  Presented in this way, the tracks average about 5 minutes which gives the listener plenty of time to get immersed in the reflective mood of the music.  The only time the music falls below a very high standard is on the slow airs where Kevin does not always hit the true pitch of the note.

The slow airs apart, this is a wonderful record and a sincere tribute to a great champion of traditional music.