Music from the Edge of the World

Unquestionably, one of Ireland's most inventive traditional bands, Cran can always come up with imaginative album titles and here's their fourth album, 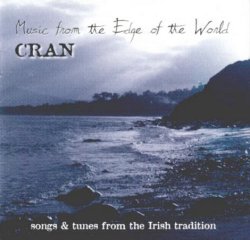 Music from the Edge of the World to follow The Crooked Stair, Black Black Black and Lover's Ghost.

The Crooked Stair appeared as long ago as 1993 and featured the original line-up of Drogheda singer, bouzouki player and song collector, Seán Corcoran, and two Belfast-born multi-instrumentalists, Neil Martin (probably best-known as a piper and cellist) and Desi Wilkinson, a singer, lilter and fiddler most renowned for his flute and whistle playing.  Though Seán and Desi continued to play together regularly, Cran only really emerged as a fully-fledged recording and touring entity when uilleann piper and low whistler, Ronan Browne, a Dubliner, replaced Neil Martin.  (The Crooked Stair, by the way, appeared on the now dormant Cross Border Media label, making copies extremely hard to track down.  However, much to the musicians' displeasure, certain tracks were licensed to other labels, so, for instance, one can find songs such as Fiollaigean and Dúlmán on the CD Lord of the Dance - The Very Best of Traditional Irish Music and Song released by Carlton Sounds.  The liner notes do not credit Cran.)

A relative flurry of recording activity followed Ronan's arrival, resulting in three albums in four years, reinforcing the band's success in places not usually considered hotbeds of traditional music, such as The Netherlands.  While 1998's Black Black Black was produced by the US rock legend, Shel Talmy, the band returned to self-production for 2000's Lover's Ghost and now Music from the Edge of the World, both of which appear on their own Black Rose label.

The new album represents, in one sense, the dilemmas faced by professional traditional musicians (if such a concept is not contradictory).  Commercial success can only be achieved through regular touring and the supporting sale of CDs.  The problem is that audiences often expect the material played or sung to appear on the album they can buy at the gig or, if they're lucky, in shops beforehand (a related issue, of course, is that some audiences may expect the material to be played or sung exactly as it appears on record!).  Cran's difficulty is that, having successfully aired Lover's Ghost, on three tours, the band needed a new album for their latest excursion.  So, Music from the Edge of the World was specifically recorded to be easily replicable on the live stage.

This means that the production techniques evident on, say, Black Black Black are largely absent from Music from the Edge of the World.  So, for example, the former's opening track,.  Abbey Reel/West Clare Reel, featured numerous overdubs, allowing Desi Wilkinson to lilt and play flute simultaneously or Ronan Browne to accompany his own pipes with his very own flute.  It is not the case that Cran used overdubs or multitracking excessively, but Black Black Black was very much a studio album creating a depth of sound, not least in the multitracked vocal harmonies, that was impossible to replicate on stage as a trio.  Similarly, both this album and Lover's Ghost included guest musicians.  Fiddler Kevin Glackin and the keyboards of Tríona Ní Dhomhnaill appeared on both albums, while Black Black Black also featured synthesised strings, the choir Anúna and the aforementioned Mr Talmy on tambourine (hmm, that's nice, Shel - sorry, slipping into Viv Stanshall mode).

Consquently, Music from the Edge of the World sees Cran as a trio stripped bare, musically naked for all the world to see.  Ironically, therefore, a band whose success was built upon the relative complexity of its recordings has now issued an album, simple in comparison, in order to bolster that success.  Now, of course, this would obviously matter if Cran were a bunch of no-hopers hiding their lack of talent behind studio techniques, but this is palpably not the case, for Desi, Ronan and Seán are masters of their respective crafts.

Music from the Edge of the World consists of fourteen tracks, including nine songs.  As ever, lyrics are provided and even translations for the Irish language songs (and the one Scots Gaelic song) together with brief, but pertinent notes on the sources.  Some of these make fascinating reading.  For instance, the album's second song, Seán Bán, an erotic song from Connemara, has 'so much double-meaning... that we are not quite sure ourselves what some of it is about'.  It is hard to disagree, especially with (translated) lines which read 'Every town is nice except grey Clionach of the periwinkles' or 'Nicely I would plant potatoes for you even better than I would cut turf'.  The latter, of course, is an offer that few men would resist.

As ever, the instrumentals are sprightly and exquisite and, probably, none better than a fulsome rendition of that much recorded reel Toss the Feathers, which is Desi and Ronan reinvigorate by playing on 'aged' Clarke's whistles.  Elsewhere the pair combine to provide a resonant backdrop for Seán's passionate singing, either through instrumental prowess or the warmth of their supporting vocal harmonies.  Corcoran is on fine form himself throughout, demonstrating the sheer breadth of his song repertoire through both familiar songs, a gorgeous solo rendition of The Banks of the Bann, and the resurrection of the tongue-twisting 'stage Irish' song, The Whistling Thief.

Ultimately, however, Music from the Edge of the World further demonstrates the uniqueness of Cran's sound and makes this one of the essential purchases of 2002.