Bonnie George Campbell;   Boys the Buzzards are Flying;   Broad is the Road That Leads to Death;   Old Lady;   Puncheon Camps;   Fathers Now Our Meeting Is Over. 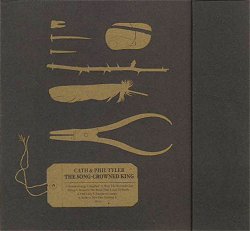 As you'll know from my reviews of Cath and Phil Tyler' previous CDs, Dumb Supper and The Hind Wheels of Bad Luck, I'm a considerable fan of their music.  I didn't like the second quite as much as the first, so I'm very pleased to tell you that No.3 is another winner!

It has a rather odd history - having been recorded some three years ago, and intended as a 10" vinyl release.  That is still the intention, but there is no time frame at all for that to happen.  That is why this CD has only six tracks - but there's not a bum one amongst 'em.

Bonnie George Campbell must be quite well known, but this is a lovely treatment.  This is not the only non-American song on the disc; Broad is the Road That Leads to Death is an Isaac Watts (born Southampton, 1674) hymn which began appearing in hymnals around 1760, usually sung to the Wyndham tune.  Here, the Tylers have used their own tune - and a good one, too.

Old Lady is Appalachian (I presume) - as haunting a ballad as you’ll hear anywhere.  Phil Tyler, as well as accompanying Cath on guitar on all the songs and singing harmony on several, gets a couple of instrumental tracks to himself.  One is the fairly well-known Puncheon Camps, played very well on fretless banjo; the other is Garry Harrison's Boys the Buzzards are Flying on fiddle.  Impossible to choose which to play you, so I flipped a coin and got the latter.  To finish, we have Fathers Now Our Meeting Is Over, one of the songs used to close an Appalachian camp meeting.  It was first noted by John Lomax in 1934, and later by the Warners; it was recorded by Dillard Chandler on the Dark Holler CD.

Despite its short length, this is another great offering from Cath and Phil, which can be bought at bandcamp.com   Well worth the trouble for only Ł5.00.