MTCD363: Talk;  Cruel Mother and Talk;  I Wish I Wish;  Green Wedding;  Wexford Murder;  Handsome Cabin Boy;  Bring Back My Johnny;  Frog and the Mouse;  Betsy of Ballantown Brae;  Jew's Garden;  Maid That's Deep in Love;  Write Me Down;  Shule Agra;  Grey Cock;  Cruel Mother (Father's);  Bring back My Johnny;  Grey Cock;  Farewell He;  Love it is a Killing Thing;  Betsy of Ballantown Brae;  Maid That’s Deep in Love;  Shule Agra;  Handsome Cabin Boy;  Green Bushes;  Cruel Mother;  Talk.
MTCD364: A Little Drop Left in the Bottle;  Rosemary Lane;  My Bonny Irish Boy;  Kitty Wells;  I Once Loved a Young Man ;  Liza's Wedding ;  Peaky Blinder;  She's Not No Airy Fairy Lady;  No Irish Need Apply;  I Have Roamed Many Lands;  May I Come Home Again ;  Over Hills and Lofty Mountains;  Aye for Saturday Night;  Bunch of Shamrock recitation;  No Green in Her Eye;  I Once Had a Sweetheart;  If I Do I Do ;  Only a Year Ago;  The Policeman;  You'll Want Me Back Some Day;  The Royal Divorce;  Are We to Part Like This Bill;  When you get up in the Morning;  You've Quite Forgot Your Mother;  Farewell to My Country;  Wedding Bells;  Green Grow the Rushes;  Paddy You're a Villain;  Come Along with Me My Lady Love;  Lady in the White Silk Dress;  Window Cleaner / Bill Poster;  I Dare Not Go Home;  Sailing in My Balloon;  Faithless Little Doner ;  I Come From Sweet Tyrone;  Barbara Allen ;  The Only Bit of English;  Dear Old Mother;  Puss;  Sail Away ;  I Don't Like Work;  Ain't it Nice to have a Father;  Is Your Mother in, Molly Malone?;  The Table was Laid for Three;  Send Me a Simple Daisy;  Take Me Back to Dear Old Blighty;  When London's Fast Asleep;  Black Eyed Susan;  Won't You Tell Me, Daddy;  Stop the Cab ;  Some They Call Me Ikey;  Saturday Night;  Chuck Him Up ;  Mother Had an Apple ;  You're Not Dead Yet;  Johnny, When You Come Over ;  Only a Chimney Sweeper;  Mary Was a Milkmaid;  Cuckoo's Nest;  I lost My Love and I Care Not;  I'll Stick to the Ship / Queen Elizabeth;  Kathleen ;  No Irish Need Apply (folk club). 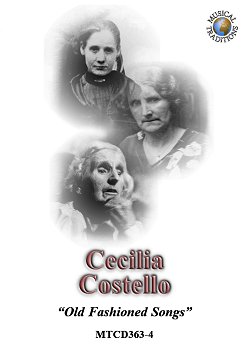 Cecilia has long been regarded as one of England’s most important traditional singers, though in fact much of her repertoire and style came from her Irish family members, particularly her father.  The 1975 album that Bill Leader released achieved widespread recognition (if not very many sales) for the woman and her songs.  All thirteen versions became current in folk clubs, particularly her way with The Grey Cock and The Cruel Mother.

The Leader album was released a year before her death, by which time these tapings were already nearly a quarter of century old, recorded by Marie Slocombe & Pat Shuldham-Shaw for the BBC Archives.  According to which booklet you believe, Cecilia was born on 8 February 1883 (Leader) or 24 October 1884 (Musical Traditions) though the MT booklet reproduces the birth certificate.

1 In either case, she was getting on for 70 when she was first recorded but still a very fine singer with good pitch, noble delivery and a fine sense of timing and a repertoire of traditional songs the quality of which would be difficult to match.

The thirteen items from the vinyl album are the first of the 89 presented here.  There are other tracks from the 1951 visit on CD1 and some made by Peter Kennedy in the same year (though Rod Stradling’s notes refute Kennedy’s claim to be to her first).

2  The second album comes from 1967 and 1971 – songs, snatches, recitations, conversations recorded by Roy Palmer, Charles Parker, Pam Bishop and others.  The later recordings are not of the same quality as the earlier ones either technically or in the singing of what sounds like a very frail, if clearly delightful, old lady.

Rod has to be admired as always for the inclusive attitude that he brings to his releases and it is important information that Cecilia had a broader range of songs, many from the music halls, than is found on the Leader album.  A question that is bound to arise, however, is whether the likes of a 30-second croaky snatch of Take Me Back To Dear Old Blighty deserves a place alongside the regal magnificence of the 1951 recordings.

1. Surely, you'd believe the MT notes, as confirmed by the Birth Certificate.

2. No they don't!  They clearly show that Kennedy recorded her first (10 songs), but then invented a second recording session which, he claimed, resulted in 6 more songs (as released on Folktrax) which were actually doctored copies of the Marie Slocombe recordings.

3. Which is precisely why it appeared on the second CD, and not 'alongside the regal magnificence of the 1951 recordings'.