First Through the Gate

Brian Conway, a fiddle player born and raised in New York, is one of those rare musicians who has developed a naturally Irish way of playing without having spent long periods in Ireland.  This is his first solo release made up from studio sessions over a few years. 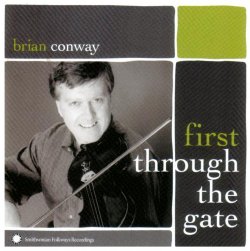 This unhurried approach to making a CD means all the tracks are top class and have a freshness and clarity which adds to enjoyment of the music.  He is joined on some selections by his mentor Andy McGann and by his own pupil Pat Mangan, another New York native.

It takes a special combination of circumstances to produce a fiddler of this maturity and style, and Brian has enjoyed his fair share of help and encouragement.  His first teacher was Martin Mulvihill from Limerick.  Brian's other big influence was Martin Wynne, one of Sligo's best-loved sons who died in America a few years ago.  As his experience and ability grew he became friends with Andy McGann, himself a native of New York but a man who in his early days met, studied with and played with some of the great names of the 78rpm era, including Michael Coleman, Lad O'Beirne, Paddy Killoran and others.  Brian has stayed faithful to the style of those exiles of the past and it pleasing to report that the influences of American swing, jazz and all the other paraphernalia that are obvious in the playing of Eileen Ivers or Liz Carroll are completely absent from this record.

Kicking off with a set of reels, Brian's mastery of the instrument is immediately obvious, as is the influence of Andy McGann.  Anybody who has listened to McGann's classic Shanachie LP from the '70s will recognise the master's tricks; a wonderfully light touch on the bow that emphasises the triplets and rolls and a fierce rhythm that bounces the tunes along without ever feeling hurried.  What can't be learnt though is the way traditional players introduce subtle variations in ornamentation and melody.  Brian Conway shows tremendous understanding of the possibilities presented by the idiom in his own use of rolls, triplets and the occasional drop to the bottom string to play a note an octave lower than normal.

The choice of tunes often has references back to those recordings that McGann made with Paddy Reynolds or Joe Burke, although they are not slavish copies.  A brisker tempo than McGann's in the slip Barney Brallaghan show that Brian Conway is his own man.  The McGann and Reynolds LP is also brought to mind when Conway plays a couple of duets with his guests.  All three fiddlers join forces for one selection each of reels and jigs and their playing is wonderful throughout.  This is a good example of how Irish music bridges the generations.  There are more links with the past when Brian and Pat Mangan play four of Martin Wynne's reels.  Three of these tunes are fairly well known and widely played but this is the first time the fourth has been recorded.  The sleeve notes tell a nice tale of how Brian coaxed this reel out of Martin.

Mark Simos on guitar and Felix Dolan on piano provide most of the backing.  Dolan's piano has graced some of the great New York recordings since the '70s and his touch is always sure and supporting.  The guitar sounds very well mixed and sits comfortably against the fiddle, clear and yet never dominant.

The sleeve notes on this CD are exemplary.  Running to nearly 30 pages, they give a short biography of Brian and his musical influences and each selection of tunes is supported by some brief but informative notes.

All in all this is an unassuming classic and a worthy addition to the Smithsonian catalogue.  There has been no great hype to launch the CD and indeed it took several months before it was available in the British Isles.  If you see a copy grab it with both hands.