One of England's longest-standing and best-organised Irish communities is based in Bedfordshire, especially around the towns of Luton and Bedford.  Though nowadays living in the Mayo gaeltacht of Tourmakeady, Mick Conneely was born and raised in the latter, part of a family with a lengthy traditional music history. 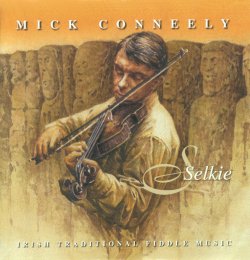 Both his father (also named Mick and from Errislannan, near Clifden, Co Galway) and grandfather (Máirtín) were fiddlers, so it was no surprise that young Mick and his three sisters (including Bernie, now known for her banjo-playing with The London Lasses) were enrolled to attend Brendan Mulkere's music classes.  (Though based in London, Brendan also travelled to teach in Bedfordshire and his former star pupils from the area include the button accordionist John Whelan).

Mick's repertoire came from his father, Brendan's lessons and the many musicians who visited the family home and, in later years, he would travel to Birmingham to play with the likes of flute player Kevin Crawford and accordionist Brendan Boyle.  Regular visits to Miltown Malbay for Willie Clancy Week enhanced his burgeoning reputation and led to friendship with Mary Bergin, the tin whistler, and regular tours with her.  In 1991 Mick also toured the US with De Dannan and played frequently with the band over the next four years.  His own band, Errislannan, including Brendan Boyle, was formed in 1993, and released an eponymous album a few years later.

Though issued in 2001, Mick's solo album, Selkie, was actually recorded in Berlin in 1999 and let me get one major gripe out of the way from the onset.  Not only are the liner notes of my copy badly cut, so that the contents of each page are slanted (now corrected in the above cover picture), but their designer seems to have little understanding of the concept of legibility.  It's hard enough attempting to read long paragraphs of 8pt sanserif type, but when the font colour is white on a beige background, the task becomes well nigh impossible!  The culprit, presumably the man credited for the artwork, one Andizej Kowalczyk, should be beaten about the bonce with a bodhrán.

Unfortunately, the second gripe has to be posted formally through Mr Conneely Jr's own letterbox.  This is simply one of the tinniest sounding recordings I have heard in a very long time and harks back to the CD's early years.  In real life, the sound of Mick's fiddle has a sharp, but by no means grating, edge, yet on Selkie, overuse of the treble controls make it sound ominously piercing in many places.  Equally, the bouzouki of Mick's accompanist, Niall Ó Callanáin, has been so distorted by the mix, that it sometimes sounds like a miniature version.  The men responsible are presumably Mick himself, as producer, and Ulli Schauf, the engineer, though, oddly, the album was actually mixed and mastered by the pair (with the assistance of Svend Kjeldsen, Errislannan's bodhrán player) some sixteen months after it was originally recorded.  Whatever the reason for the outcome, it must be stressed that the enjoyment of this otherwise excellent album is severely undermined by low production values.

The album's track listing (more white on beige and italics to boot!) indicates a preference for the reel above other tune forms (eight out of thirteen), though perhaps Mick's most evocative playing appears on a set of hornpipes, The Showman's Fancy / Flee as a Bird.  Mick notes that the latter appears in William Bradbury Ryan's Mammoth Collection of 1883 as a Lancashire clog dance, but, more importantly for our purposes, was recorded by James Morrison in 1935.  Mick cites both Morrison and Frankie Gavin as influences on his own development and this hornpipe encapsulates such elements, blending Morrison's sheer eloquence with Gavin's fiery panache.  In contrast, the reel, The Gravel Walks, oft associated with John and Mickey Doherty, exhibits another aspect of Connolly's fiddling, welding together rapid triplets, use of bassing and an attacking bow style in the true Donegal tradition.  However, perhaps, the best track of all unites Micks junior and senior in a powerful fiddle duet for the reels The Providence / The Eel in the Sink / The Culfada.

Lastly, for the origin of the album's rather strange title, Selkie, Mick offers this explanation:

'Selkie legends exist in Ireland, Scotland, the Northern Isles and Scandinavia.  According to Irish legend, the Conneelys come from the seals.  A female Selkie is able to discard her seal skin and come ashore as a beautiful maiden.  Within these magical skins lay the power to shape-shift back into seal form and therefore these had to be guarded at all costs.  If one of the Selkie-folk lost a skin, they were doomed to remain in human form until their magical skin was found again."

Well, that just about seals it then (sorry!).