This CD captures the ease and pleasure of two great old players sharing a few tunes.  It will probably stand as a classic example of a local style, now disappearing as modern musicians introduce other influences. 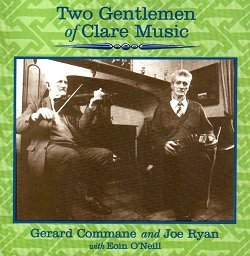 As Gerdie Commane recalls, these musicians first met at harvest time in 1941.  Now, nearly 60 years on, we get a glimpse of the mighty music these two men must have played back then.  Gerdie Commane spent his life working the family farm and has never travelled far.  This is the first commercial recording of him.  Until now, the concertina recitals at the Willie Clancy Summer School may be the only opportunity many people will have had to hear Gerdie, but fiddle player Joe Ryan has made two records, the last one released about 10 years ago.

This recording of Irish dance tunes was made in the living room at Gerdie's home in Kilnamona.  His verbal introductions and the odd incidental noises of wind and weather give the same feeling of ease and intimacy as the old field recordings made by Peter Kennedy or Kevin Danaher in the 1950s.  However, modern recording techniques mean that the character of both instruments in solos or duets is always clear and true.  The music is played at a steady rhythmical pace, which some listeners might find slow, but this tempo would not seem unusual in many parts of County Clare.

Gerdie Commane started on the concertina at the age of 8 or 9 and bought the Jeffries concertina he plays here from London in 1951.  A neighbour collected the instrument for him.  On this CD Gerdie plays a fine selection of Clare tunes as well as a couple of more modern compositions by Nenagh fiddle player Sean Ryan.  Gerdie is recognised locally as a great source of old tunes and settings and the CD includes an unusual and very interesting version of The Star of Munster.  His settings fit the concertina well and allow him to introduce some pleasant cuts and triplets as well as some bass notes, which make Clare concertina players such a joy to listen to.

Joe Ryan is rightly regarded as one of the masters of Clare fiddle style.  When work took him to London and Dublin, his musical partnerships with fellow Claremen Bobby Casey and John Kelly became legendary.  Joe also met, and was heavily influenced by, Tommy Potts and this is apparent in his settings of tunes like The Bunch of Keys which appeared on Tommy Potts' Liffey Banks LP over thirty years ago.  Joe's fiddle playing is lively with the characteristic mournful touch so typical of Clare fiddlers.  The influences of Casey and Potts come out in the subtle twists and variations he puts into the tunes.

Eoin O'Neill plays bouzouki gently on a number of tracks providing a simple frame for the tune players while allowing them to set the pace and rhythm of the tunes.  However, it would have been nice to have a few more tracks unaccompanied to add further variety to the overall sound.

The sleeve notes are disappointingly brief.  They could have provided a better picture of the two players and more information about the sources and names of the tunes played.  In a number of instances, the musicians play two or three tunes which are given one common title.  Tantalisingly, we are told that Gerdie, in particular, was happy to intersperse his tunes with reminiscences and anecdotes, some of which might have added interest and information.

This CD is the first in a planned series of recording of Clare musicians on a new label set up by Eoin O'Neill and John O'Connor of Custy's music shop in Ennis.  Eoin and John should be congratulated for organising and producing the recording after becoming good friends of the two musicians through their regular visits to the shop.  This CD, and any others to follow, will be important contributions to the treasures of Irish musical heritage and will be enjoyed by anyone who wants to learn from the players or just likes to listen to the sheer simplicity of two Claremen enjoying some tunes together.

For anybody finding it difficult to get the CD, it can be ordered on-line from Custy's web site www.custysmusic.org