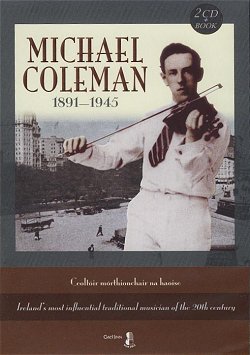 Let's get the usual Gael Linn reservation out of the way at the start - these two CDs run to nearly 74 and 75 minutes duration respectively - so absolutely no complaints there!  Further, it's by no means unusual to find that a first rate recording is paired with a mediocre booklet; again, Gael Linn have got a superb piece of documentation from Harry Bradshaw with this 80-page booklet - something any record company should be extremely proud of.

I've been extremely proud of the booklets accompanying most of the MT Records CDs, but few of them come up to the standard of this one.  This shouldn't really be surprising; few of our records have been of performers who were particularly well known, or ever had as much written about them as did Michael Coleman.  Harry Bradshaw was able to quote from a staggering 34 individual commentators, 7 sets of official records, and 9 newspapers in producing the text of this booklet.  One might almost say the all he had to do was to put the pre-existing material into chronological order, and make of it a coherent narrative.  Maybe - but he has done so splendidly!

Not being any sort of an expert on Irish music in general, or that of the period, or the American scene, in particular, I'm not in a position to judge the accuracy of the picture of Michael Coleman that Harry Bradshaw paints - but there was one thing that did rather surprise me.  In commenting on the effect the American 78s had back home in Ireland, he writes:

It has been argued that Coleman's music also had a negative effect on Irish music in that it brought about the demise of local styles.  It is often forgotten that Coleman's records and those of his associates came at a time when the fortunes of Irish traditional music were at a very low ebb.  Without the renaissance spearheaded by the Sligo musicians in the 1920s, we might very well not have the vibrant live tradition we have today.  The loss of local and regional styles is greatly to be regretted, but change was of course inevitable as lifestyles and music changed in response to outside influences.  During a time of great social change Coleman and his records offered an impressive model which many traditional musicians willingly chose to follow.

But I had thought that the period when 'the fortunes of Irish traditional music were at a very low ebb' was more in the 'forties and early 'fifties.  Junior Crehan said that in the 'twenties and early 'thirties the country house dance was going strong:

There'd be a dance here, and the people from Miltown (would say): "We want you at our house tomorrow night," and you might meet other folks there that night: "Oh, you must come with us the night after!"   It'd be going on that way, and Lord, you'd be falling dead for want of sleep, and you'd swear that, well I'll go to bed tomorrow, whatever happens, and I won't go anywhere.  But - you'd cock your toes in the evening and off again!

In 1936, the Irish government, spurred on by the combined weight of clergy, judiciary and police, enacted the Public Dance Halls Act.  Seamus MacMathuna wrote:

In the 'forties ... lovers of Irish music must surely have felt that the fates had decreed that their music be banished off the face of the earth.  The country was poor, and her lifeblood streaming steadily away on the emigration ship.  The house-dance and ball-night had all fallen victims of the ruthless machinations of church and state.  The pubs you would be even allowed - let alone encouraged - to play a reel or jig on a fiddle or flute were rare indeed.

So, they barred the country house dance, and the priests was erecting parish halls.  All they wanted was to make money - and they got 3d. into every shilling tax out of the tickets to pay the government for tax.  So the country house dance was knocked out then, and 'twas fox-trots, and big old bands coming down, and our type, we'd be in a foreign country then.  We couldn't put up with it at all, the noise and the microphones, and jazz and so on ... the music nearly died out altogether - Irish music.  Then the emigration started, a lot of the lads I used to play with went off to England and America, and there was no-one but myself - Scully was dead - and I used to go down the road, and I used, honest to God, I used to nearly cry.  Nowhere to go, no-one to meet, no sets in the houses, nothing left but the hall ...

So - the influx of American 78s did have an effect on musicians back home in Ireland, but I suspect that it was rather less than is suggested here.  And 'The loss of local and regional styles' occurred somewhat later, had other causes as well, and was more than 'greatly to be regretted' - it was a tragedy!

[The quotations above come from Barry Taylor's excellent article on Junior Crehan in these pages.]

Of the music on the two CDs, there's very little I need to say.  Most readers will, I think, have heard at least some of Michael Coleman's music, but will never have heard it better than via Harry Bradshaw's remasterings here.  Try a little of Lord McDonald - track 1 (sound clip).

Since this set is not due to be issued until the 8th of April, there's no information about it yet on the Gael Linn or Claddagh websites, and nor does the accompanying publicity blurb tell us much about it's provenance, but it seems that this is a slightly updated re-release of the 1992 Viva Voce product.  Harry Bradshaw's booklet is said to be 'revised' and it seems that the tracks selected here are not exactly the same, or in quite the same order, as Viva Voce's.

Lastly, it is something of a pity that the double DVD case Gael Linn have chosen to use requires that you remove the booklet before you can play one of the CDs, but that's a fairly minor complaint.  This set and book is well worth buying.