Traditional Tunes From Gloucestershire
by Charles Menteith and Paul Burgess

It's a great pleasure to find a 'do-it-yourself' production of such high quality as this book.  The general layout is entirely logical and the staff notation is exceptionally clearly presented. 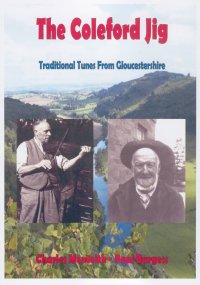 Furthermore, I like the rationale behind the selection of the tunes published - not to mention the fact that it is both stated and explained!

They have included most of those tunes originating within Gloucestershire which are available to them (some 250 at a guess, though they are nowhere enumerated in the text as far as I can see).  They have excluded the morris tunes from Sherborne, Longborough, Bledington and Oddington, which have been published by Lionel Bacon, among others, plus those of Chipping Camden Morris, since the dancers prefer them to remain unpublished.  Also excluded are the Bampton-in-the-Bush Morris dance tunes which Sharp originally noted from William Wells in Stow-on-the-Wold.  This is because, although Stow is in Gloucestershire, Bampton is in Oxfordshire - a fact the editors imply, but do not state.

They go on to say 'We hope that this book will enable the tunes to be more widely known and played.  We have aimed to produce a practical book for musicians, as well as reflecting faithfully the original performances.  We also hope to give the reader an overall view of the repertoire and style of each musician, if enough of their tunes are known.'  This is something I applaud heartily - the tunes are not arranged by type, nor alphabetically, but by the performer, or the manuscript maker (who was usually also a performer).  Thus we can find, starting on p.1, all of Lemmie Brazil's 16 known tunes, followed by all of Stephen Baldwin's grouped together with those of his father George (Charlie).  Later, we find all the 43 tunes of the George Till manuscript.  In some cases they have given the more significant variants, to give an idea of the way in which musicians altered the tune on different playings.  This admirably shows 'an overall view of the repertoire and style of each musician'.

There are three full pages of notes on the musicians and manuscript writers, and a further two and a half pages of notes on many of the tunes.  Although this allows for little more than a pen-picture of the players (for some of whom little more is known) there are a few about whom some substantial information is available.  To accommodate this and other information, the editors are preparing a website.

By the time the book is 'officially' launched - at Sidmouth's Bedford Hotel on Friday lunchtime (at the same time as the new Old Swan Band CD) - it is hoped that a website will exist at: www.colefordjig.org.uk in which will be found all the Gloucestershire tunes which aren't in the book.  Paul Burgess told me, "Obviously we didn't want to included a dozen versions of Shepherd's Hey with only one or two notes different, so we thought we'd put them on the website so that people can compare/contrast.  There will also be an expanding section of notes on the tunes - possibly as the start of a more general tunes history site linking with the Village Music site."

Of far greater interest to me; he went on, "There will be more detailed biographies of the musicians - a link to the John Mason biography (which is almost finished and I'll offer to Musical Traditions), and also William Hathaway, Stephen & Charles Baldwin, George Simpson - perhaps others, if I find sufficient material.  The additions to the website will be flagged as 'What's New' and dated.  Photographs, links - in fact anything else I can think of ..."  Once again, we can thank the technology of the computer and the Internet for the way it allows those working in traditional music to share their findings with the rest of us in their community.  Or - more accurately - that proportion of them who are willing to do so!

So - if you want to know about the 'other' 14 tunes Lemmie Brazil played, or what The Sloe sounded like when John Mason played it, then this is the book for you.  Around 250 tunes for Ł7.50 has to be exceptionally good value!