A Collection of the Most Celebrated Irish Tunes 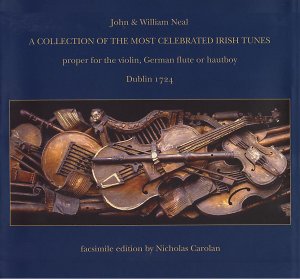 This is a truly inspiring piece of work - even before you open it, the cover illustration (of a wooden frieze from the 1724 organ gallery of St Michan's Church, Dublin) will surely dazzle the eye.  And when you examine the Index, you realise that, of its 132 pages, the actual facsimile takes up only 31, leaving about 100 pages of introductory and background information, and notes on the tunes and songs (including their texts in both modern Irish and English translation), plus 30 illustrations ...  This really is a most impressive book.

Although traditional music existed in Ireland for thousands of years, it was 1724 before the first notated collection of Irish music appeared.  Consisting of forty-nine tunes, and far older than any surviving manuscript collection, A Collection of the Most Celebrated Irish Tunes ... was published that year in the yard of Christ Church Cathedral in central Dublin by the musical-instrument makers John and William Neal, a father and son of obscure origins who dominated the Dublin music trade in the first half of the eighteenth century.

Sold for the new and fashionable instruments (violin, German flute and oboe), the collection consists almost entirely of traditional Irish harp music and the melodies of traditional Irish-language songs, many with titles in Irish - and many of the tunes reveal a sympathy with the defeated but still powerful Jacobite cause; both are surprising in a publication produced in the heart of ascendancy Dublin.

Also surprising is the fact that The Collection was generally inaccessible to the public for about 250 years.  It's likely that not many copies were actually printed, and few of the early publishers of Irish music appear to have seen it.  Edward Bunting didn't acquire his copy until 1794 - and it disappeared unon his death in 1843, and was not rediscovered until 1907.

This new facsimile reprint of the Celebrated Irish Tunes has been made from the single surviving copy of the original publication (that owned by Bunting), and it makes generally available again a collection of Irish traditional music that was current three hundred and more years ago, music that differs greatly from the Irish traditional music of today.  A document of social and political significance, the collection is chiefly important as a foundation source of Irish music, offering insights into its distant past and providing melodies for modern re-creation and study.

The illustrated introduction and notes on the tunes by Nicholas Carolan, Director of the Irish Traditional Music Archive, contain new information on John and William Neal, the earliest important publishers of music in Ireland, and on the state of music in the capital and the country in the late seventeenth and early eighteenth centuries.

The famous blind harper Turlough Carolan, who composed some of the tunes, was alive at the time of their publication here, aged fifty-four.  Although only four tunes are actually ascribed to 'Carrollan', or similar in The Collection, a further 21 have subsequently been attributed to him by Irish music scholars.  When the book states that The Collection contains 'music that differs greatly from the Irish traditional music of today' this is born out by my own, if meagre, observations.  The only tune I'm familiar with (by title, at least) is No.37 Morgan Macgann, and the version here is markedly different to that played to me by Irish friends, and now heard in many English sessions ... mind you, that seems to be the Cheiftains' version of it.

It is, I suppose, possible that this book will prompt some of today's players to try out the 'original' versions of Carolan's tunes (and others) ... though learning from revivalists always seems the more popular option.  That said, of course, many of these tunes have become 'traditional' in a more real sense through having passed through the hands of countless players in the 286 years since they were published in A Collection of the Most Celebrated Irish Tunes ...