Sing Christmas and the Turn of the Year

I don't know why the compilers of the Alan Lomax Collection decided to re-conjure this ghost of Christmas long ago.  I only know that I was a kid of eleven when the original broadcast was made.  As with every eleven year old, Christmas was the absolute highspot of the year.  It bore a magical glow, a quality of otherworldliness, which time and mammon never entirely smothered.  This then is one audio experience which should have spirited me straight back to never-never land.

It didn't, and before someone says '"Bah, humbug!", a word about structure, content and format will explain why.  The present CD is a copy of a British Broadcasting Corporation radio programme, which went out at 11:00 am on Christmas day, 1957. 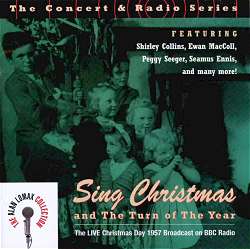 In a world where radio was fast losing its pre-eminence to television, that was one slot which still guaranteed a substantial audience.  On this occasion, it was filled by a collaboration between Alan Lomax, who scripted and narrated the programme, and Charles Parker, who produced it.  Parker gets very little credit here, but that is something for which he may be posthumously grateful.  I don't know whether Parker's bosses considered him a subordinate to Lomax.  I can only observe that the editing does not show the exacting standards for which Parker later became famous.  On the other hand, it is reminiscent of the sort of thing which Lomax was doing at that time with the Columbia World Library LPs.

The programme had a series of linkups, plus a large number of live performers and various taped inserts; the aim being to convey the spirit of Christmas, as celebrated all over the United Kingdom.  There were seven linkmen, including Charles Chilton in London, Ewan MacColl in Castleton, Derbyshire (which Lomax pronounces Castletown), and Peter Kennedy and Charlie Bate in Plymouth; plus relays from Wales, Northern Ireland and Scotland.  Between them, they squeezed no less that sixty two fragmentary performances, plus introductions, into this sixty minute pint pot.  I lament the results, but I marvel at the co-ordination.

To underline the whizz-bang effect; the performers included several traditional artistes, a couple of formal choirs, various folk revival singers, an assortment of instrumental musicians, a bit of calypso, a slice of Ghanaian High Life, excerpts from two mumming plays, a snatch of rapper sword, a miracle play, a modern nativity play, a marching jazz band, a bible reading, an assortment of Gaelic pieces, three stories from Lomax, several bits of skiffle, and two verses from Robert Louis Stevenson's poem Christmas at Sea.  Here endeth not the entourage.  Here merely endeth my attempts to convey its size and diversity - and the impact of the programme.  It reminded me less of Christmas, more of a whirlwind trip round the January sales.

Just as January sales retail last year's fashions, this programme retails outmoded standards of performance and presentation.  The dated feel derives partly from occasional 1950s BBC-speak, and partly from Lomax's cornball introductions.  It also stems from the skifflers and some of the folk revivalists.  Most of the other contributions are timeless and Christmas.  They would have worked well together with less fragmentation, and in a less frenetic showcase.  However, the revivalists and skifflers tend to sit awkwardly amid the more conventional Christmas fare.  Their performances too are hardly state of the art; Bert Lloyd singing The Derby Ram like a sea shanty; Ewan MacColl singing God Rest Ye Merry Gentlemen like a Child ballad.  I defy you not to collapse with laughter at that skiffled up rendering of Good King Wenceslas.  Well, skiffle came and skiffle went and skiffle has been largely forgotten, but the efforts of such respected leaders of the early revival are less easy to dismiss.  The explanation is two fold.

Firstly, these were experimental times.  The revival was new and its practitioners were still learning how to handle the medium of folksong.  The second explanation relates to the Marxist persuasions of these early revivalists.  The programme makes commendable efforts to assert the oneness of humanity, and to demonstrate lower class identification with the humble image of Christ.  Yet we cannot escape the fact that Marxism is a secular creed, and hostile to religion.  Do not misunderstand me.  I regard Marxism as a noble philosophy, albeit one which is in considerable need of modernisation.  There is a practical problem though; namely that the early revivalists never came to terms with the fact that vernacular culture, the world over, entails large measures of ritual and religion.  Certainly, Lomax's story about Cromwell's attempts to abolish Christmas, rings oddly in the light of happenings in the Soviet Bloc.

Paradoxically, though, I was never a fan of Shirley Collins or "Petty Officer Tawney" as Peter Kennedy calls him.  Yet both acquit themselves agreeably, if briefly.  Indeed, Shirley Collins' youthful singing of The Truth Sent From Above sounds as guileless and innocent as, well, anything else you might associate with Christmas.

Any other signals of redemption?  There's a nice blast of Boscastle Breakdown, from Bob Cann and friends, some lovely fragments from Charlie Bate, and Seamus Ennis puts in a characteristically masterful performance.  Who though, outside of a Hollywood movie disaster, would nowadays think of saddling an uilleann piper with a drummer, or of cutting him off in full flight?  There is also a couple of local carols from The Cheshire Cheese in Castleton, plus a fascinating piece of carolling lore from Ewan MacColl.  Yes, I did say this was 1957, which means that the Castleton carollers were on the air a good ten years before the West Yorkshire/Derbyshire carolling tradition became common knowledge to the outside world.  Oh, and there's a bunch of young lads making what must be the briefest wireless debut ever.  They're not skifflers.  They're not a folkgroup; just three committed convivialists who explore their native dance music with a commendable enthusiasm.  What little we get of The Tenpenny Bit is worth cherishing for youth and vitality more than for smooth discipline.  Yet forty three years on, The Rakes are still in there swinging.  That is what I call timeless.

I'd hate to leave you feeling as though Bob Cratchet's last lump of coal has just gone out.  That is partly out of deference to the season, partly because the major participants did much better work elsewhere, and partly because if nothing else, this programme is a fascinating piece of cultural history.  It is a recollection of radio as it was, and a signpost to the radio ballads.  That's not all.  Sing Christmas encapsulates a crucial period in the history of British popular music; when jazz, skiffle, folk and mainstream pop converged to lay the foundations of virtually every musical fashion which has happened since.  If, despite McCormick's warning, this turns up in next year's Christmas stocking, make sure you read the accompanying article by Ken Hunt.  It is quite superb, and sets the whole thing firmly in its political, historical, and social context.  If nothing else took me back, his picture of family Christmases, in the comparative austerity of 1950s Britain, certainly did.