with powder, shot and gun

Cupid's Garden;  The Bitter Withy;  Henry My Son;  The Drowned Lover;  The Gown of Green;  Death and the Lady;  The Poor Old Couple;  The Seeds of Love;  Searching for Young Lambs;  The Poachers' Fate;  Peggy Benn;  Green Upon the Green;  Six Dukes Went a-Fishing;  The Storms are on the Ocean;  Henry the Poacher;  No Sir No;  Sweet Belinda;  Up in the North;  The Royal George;  John Barleycorn;  The Wild Rover. 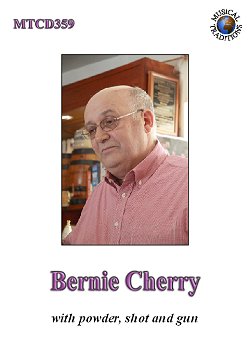 In his introduction to this CD, Rod Stradling says, '... it was his singing that I always remembered; not at all like any of the other revivalists I’d heard ... he didn’t quite sound like someone trying to sound like a traditional singer either ...' - meaning that Bernie has his own unique style, of course, but the use of the terms 'traditional' and 'revivalist' always catches my attention.  You see, I think these styles (genres?) are - to this day - just as distinct and yet I find them - to this day - just as difficult to define!  And I know this differentiation may cause heated debate but I hope that, every now and then, some young singer may be prompted (as I once was) to listen to someone they had previously dismissed as a boring old fart and discover something wonderful.

I've heard it said that learning from books and records isn't 'traditional'.  This seems to imply there can only be 'revivalists' nowadays since most of us listen to records and learn from them rather than sitting in a local pub night after night learning by osmosis.  Perhaps a line can be drawn between 'learning from' and 'imitating'.  Over the years I've heard far too many singers who wanted to sound like somebody else - somebody famous.  It may seem obvious that, if that style gained your role-model fame and fortune, it must be the way to go - but they all end up sounding the same.  I guess we all imitate our heroes to some extent, especially in our early years; it's probably unavoidable and might even be desirable if it helps to keep regional accents and dialects alive but 'proper' traditional singers didn't all sound the same, even those from a relatively small community like the Blaxhall Ship regulars.  If I was to make a list of my own 'heroes' it would range from long-dead singers like Joseph Taylor to living singers like Eliza Carthy and ALL of them are totally individual.  No-one could confuse them - the character of their voices; the songs they chose; their explanation, or lack of it, of their understanding of the stories would all be very different - and yet they share something that is recognisably 'traditional'.  And so it is with a goodly number of present-day singers including - and, in my opinion, especially - Bernie Cherry.  English traditional singing continues as it always has done; less valued by the general public than, for example, Irish traditions but nevertheless, our native traditions are still alive and kicking.  Singers vary considerably in their adherence to the modes of former years.  Some stick to the old style; the way it was sung by their source (but without simply mimicing).  Others use the old ways as a template or a baseline on which to build.  Bernie does both - he sings some songs very much as he learned them and changes others to match his own preferences.  Then he sings them in his own voice.  Perhaps the difference is that he tells us when he's changed something and the old singers didn't (I knew Fred Jordan quite well and observed at first hand that he would happily change words or tunes until he had established his own version but he would never admit it in public).

Some people say that another difference between 'traditional' and 'revival' involves the tendency to explore deeper implications and to use songs to convey the singer's personal views.  They maintain that singers in the old days didn't ask too many questions but simply relayed songs from their community.  Well, I've often been accused of over-analysing things but I'm sure that, while this unquestioning transmission may have been true of a few naive individuals, many - if not most - were perfectly well-aware of the underlying issues.  Indeed, it may just be these rich undercurrents that have kept many of these songs alive and relevant to every generation.  Source singers that I have known have often been quite philosophical and surprisingly well-read characters; not what you would call naive rustics - and I don't think Bernie Cherry is naive either.  Indeed, anyone who has spent any time talking to Bernie knows that he has a wicked sense of humour and a sharp awareness of mankind's little foibles - but he somehow keeps it out of his singing.  He doesn't make a fuss or dwell on the sub-plots, he just presents a simple and straightforward - though not 'deadpan' - telling of the tale that leaves us to make our own interpretations.

For example, his first track is Cupid's Garden of which he says in the sleeve-notes, 'I very much like simple love songs like these'.  Here, Bernie has taken the Copper Family lyrics and put them to the somewhat different tune used by John Mason of Icomb, near Stow-on-the-Wold.

Synopsis: The narrator goes to Cupid's Garden (Cupid, even to the naive, being the personification of erotic love) and admires the pretty flowers*.  Then he sees two maids, one of whom is a virgin* wearing laurels.  He asks if she's 'engaged* with any young man' and she says she isn't and means to stay a virgin*.  The narration changes to an observer watching them going hand-in-hand* together and 'the sailor' (the initial narrator) intent on viewing 'the secrets of her heart'*.  He asks if she will be true while he's away at sea and, with her reassurance*, the narration switches back to the sailor looking forward to her once more sitting smiling* on his knee*.

Now read that synopsis again and, where I have put an asterisk*, insert the words, 'nudge, nudge, wink, wink'.  An over-the-top exposition of course but, to a degree, that's what many modern singers do with a song like this - 'all those pretty flowers, know what I mean?' Some might pick up on the question of why this virgin is so clearly identified as such - is she a prostitute?  How old is she?  Others would exploit the potential for cynical humour.  Perhaps I've spent too much time driving my tractor and musing about life and death (plus my thirty-year sideline as a psychotherapist) but, for me, the song raises lots of awkward questions.  Bernie presents it as a simple love song (as did the Copper Family) and very charming and pleasant it is too.  And I love that contrast between how it is sung and how I hear it.  I really enjoy the dilemma, just as I enjoy picking out the covert tensions behind the polite exchanges in an eighteenth-century novel.

As for the musicality of his singing - well, Bernie does not have a 'rich' voice nor does he use many melodic variations or ornamentations.  There doesn't seem to be many overtones and harmonics in his voice and unaccompanied singing exposes any slight fluctuation in intonation and tuning.  Where a 'trained' singer might hit every note dead on, Bernie sometimes sounds like he's straining to get the high notes but, I must stress, this is not a 'flaw' - indeed, I would say it's what makes unaccompanied Traditional singing so much more satisfying than much of the formalised Pop and Operatic genres.  That slight tension in his voice gives a different emphasis; sometimes making us more aware of the tune's movement or giving an extra poignancy to the words.  For example, 'The storms are ON the ocean; the heavens might CEASE TO BE; the world might lose its motion, love, if I prove false to thee'.  I'm no musicologist but it seems to me to use musical scales or modes other than the usual piano/keyboard 'tempered'scale that we're used to.  I think it's brilliant - soulful - beautiful - and now I can listen to it all day.  (Aren't CDs great?)

There're a few tracks with melodeon accompaniments by Roger Grimes or Rod Stradling and a wide selection of songs ranging from the comic, Green Upon the Green and The Old Couple to the deeply tragic, Six Dukes Went a-Fishing and Loss of the Royal George with several more 'simple love songs' and songs of, perhaps, greater import touching on subjects like poaching and transportation.  I would have liked to find a couple of fiddle tunes and - my only criticism - no harmony singers (they only appear on one track so it's not too strong a criticism) but that's just nit-picking.  The whole CD breathes love and respect for the old singers; for the old songs; for great stories and strong tunes.  It was recorded by and amongst friends and that shows in the evident warmth and immediacy of his singing.  As always with Musical Traditions CDs, you can read all the sleeve-notes; Bernie's biography and the song lyrics online.

I first met Bernie over 35 years ago when he was living in Pembrokeshire.  It was about the time that my wife and I were leaving our small dairy farm in North Carmarthenshire and consequently was a very brief acquaintanceship.  Then, about 10-15 years ago, I met him again.  In these recent years I have had the pleasure of hearing him sing in many informal sessions and have come to count him as a dear and valued friend.  And I know those sentiments are shared by very many people who have known him through his long involvement in music (including the earliest lineup of The Old Swan Band and Gloucestershire Old Spot Morris) and his regular attendance at Bampton for the morris-dancing; at Sidmouth Folk Week; the EATMT (Stowmarket) Traditional Music Day; the English Country Music Weekend and similar events.  If, like me, you love his singing and his company and wish you could see him more often - well, this CD might be the next best thing.  Another quote from Rod Stradling's introduction: 'If you value a no-nonsense approach to singing, and find unusual songs interesting, I think you’ll enjoy this CD as much as we do.'  Yes.  Thank you, Rod.  I do.