A Century of Song

A Celebration of Traditional Singers since 1898

To someone like myself, who has held the EFDSS and everything it really stood for in disdain for the past 30 years, this record comes as a wonderful surprise.  I am tempted to wonder (a) whether the Society would be in its present parlous state if more of its recordings had been made available in earlier decades, and (b) if the hierarchy is actually aware of what has been released in its name today.  For this an unusual release in almost every respect - it might even be considered more the sort of thing Musical Traditions might publish, had it access to the material.

This is definitely not another Hidden English - Topic's delightful 1996 offering - containing all the best-known names of English song.  Only perhaps half a dozen of these singers will be known, or even familiar, to any but the most hard-line of traddie anoraks (I have to admit that perhaps a quarter of them were new to me).  The record does exactly what it sets out to do - to provide examples of some of the singers whose songs have been collected over the past 90 years by members of the EFDSS, or those closely associated with it - and in doing so, to celebrate the centenary of the Folk Song Society.  Moreover, it does it with commendable accuracy and - judging by the tone of the booklet notes - with enthusiasm!

These notes acknowledge the recent re-appraisal of the work and agendas of Sharp, Vaughan Williams, etc.  Rather than attempting any refutation, they say, in so many words, OK - but they did this as well - enjoy it.  Nor did the compilers (Malcolm Taylor and Derek Schofield) flinch from celebrating singers from outside England, despite the E in the Society's name, including two American women, one from Ireland and a Welshman.

The CD is very well presented: the notes are excellent and the graphic design is unusual and eye-catching. 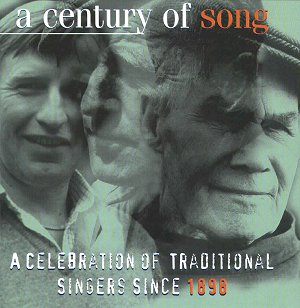 The cover graphic is particularly nice, merging photos of Harry Cox, Fred Jordan and Will Noble into a handsome collage.  It would have been nice if a woman had been included, since almost one third of the singers on the record are female and the pre-eminence of women as tradition carriers has by now been well established.  My only real quarrel with the design is that a 20-page format (rather than 16) would have allowed space for the many fine photographs to be reproduced rather larger than their current postage stamp size.

The high quality presentation focuses one's attention upon the eternal question which arises with records of this kind: exactly who is the intended audience?  Everyone involved must be fully aware of the pitifully small pool of purchasers which exists for this sort of music - apparently, Bill Leader's lavish production of the Cecilia Costello record sold only 78 copies!  Have things changed so much in the intervening period?  We are not expecting sales above 100 for the Bob Hart records - what are the chances of a much better response for this offering?  The people who do get substantial sales are Saydisc, with their Past Times and 'Heritage' connections, selling nonsense to a gullible public.  Who is to say whether the EFDSS can access this market through their Vaughan Williams/de Valois/HRH patronage?  It's perfectly possible - though the content of the present CD bears little resemblance to that of Saydisc's generally execrable productions.  Pearls before swine?  Some pretty difficult-to-digest morsels, certainly!

The record includes six tracks of phonograph cylinder recordings made between 1907 and 1909 - a bold and possibly foolhardy decision, given the recording quality.  It also makes the whole project chronologically unbalanced, giving undue emphasis to the work done in the first decade of the century.  There are no recordings from the 1920s or '40s and only one each from the '30s and '50s.  Martin Carthy, in the booklet notes, says that "for a singer, these tiny fragments are of huge importance when coming to an understanding of this brilliant, extraordinary and cruelly ignored music" - and he is absolutely right, of course.  What is less certain is the place of six of them on this CD.  It would take a very dedicated listener to do more than marvel that they exist at all, let alone learn anything substantial from the performances.  Assuming that the CD is aimed at more than the handful of such cognoscenti, one wonders what an 'ordinary' intelligent, interested and sympathetic listener will make of them.  I am reminded, as such an 'outsider', of the different reactions invoked by visits to (say) West Kennett long barrow and Bru na Boyne.

A (possibly) interesting aside to the phonograph question is raised by a quote from the 1909 publication of Banks of Green Willow, containing the phrase "Noted (and corrected from a phonograph record) by R Vaughan Williams".  This, coupled with the information that George Gardiner "did not trust himself to note the tunes of the songs he collected and used a succession of musicians to help" makes one wonder about the accuracy of much of what we believe to be traditional music from the era before audio recording.

But there are some more accessible pearls here too: Billy Bartle's Garners Gay is just lovely (sound clip), while Harry Cox's Pretty Ploughboy is majestic.

Emma Vickers was someone I am old enough to have heard live, had I known about her in the '60s (sound clip), and you can be sure that I wish I had.  Phil Tanner reminds us what a fabulous singer he was, even with such a poor vehicle as Young Roger Esquire, and Bob and Ron Copper show everyone the way it should be done with Spencer the Rover.  The two English Gypsy women are both in fine form: Mary Ann Haynes with an acrobatically sung Flash Company,

and May Bradley with the chilling On Christmas Day, while their Irish counterpart, Mary Delaney, is just stunning with Green Grows the Laurel (sound clip).  Lovely stuff.  The lovely Walter Pardon gave a typically musical rendering of Bright Golden Shore in 1983, and the sadly underrated-through-overexposure Fred Jordan delights with a carefully crafted 1990 performance of the universally loved Sweet Primroses.

This is an excellent record, and I salute Derek and Malcolm for such a radical and well realised production.  I desperately hope that its sales justify the substantial sum which must have been invested in it.  If they do, we may look forward to more of the same.  If not, you may be sure that the Old Guard at Cecil Sharp House will never countenance another such venture.