If you normally pass over ceili band records because you think they are just recorded music for dancing sets where you can't get a live band, here are three recent CDs for listening to and enjoying in their own right.  You get some brilliant musicians in ceili bands – just think of the members of the Kilfenora, Tulla, Aughrim Slopes or Castle ceili bands – but they just don't get the same recognition in a ceili band as they do on solo or duet recordings.  Do listeners have such dislike for the piano and drums, or is the lack of tonal variety through the record the reason they are often seen as the poor relation of commercial traditional music?  These CDs are a pleasure to listen to but still express the exuberance and vitality of an Irish Ceili.

The last ten years or so have seen a great resurgence of interest in set dancing and the expectation is that a good ceili band has the ability to get the dancers on their feet and to keep them moving through each figure of a set, whether it's for ten minutes through a South Galway set or nearly half an hour for the Caledonian.  The same demands are made on two or three players by a half set dancing in a small bar as on a full Ceili band blasting out to a hundred dancers in a big hall.  The players and dancers respond to each other's interpretation of the music and the whole thing become a dialogue between musicians and dancers which generates the excitement at any ceili.

It's hard to recreate that excitement without the dancers but these bands show all the tricks that make them the champions they are.  The slightest pause between tunes, or a dramatic shift in key give an injection of energy as each set of tunes progresses.

The great thing about ceili band records from the session player's point of view is that they always have good lively tunes with solid, punchy settings and are an endless source of inspiration for tunes you'd forgotten you played or the odd new tune to add to the repertoire. 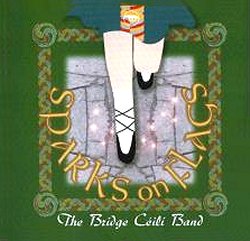 These CDs include a fine mixture of old and new; standard favourites and recent compositions sit side by side.

The Bridge Ceili band, based around north west Leinster, were recorded in 1999 after winning two All Ireland championships in '96 and '97. Every ceili band has it's own sound and the Bridge started off in the early 70s with five fiddles and two flutes as the mainstay of the band and they have maintained that focus through various personnel changes.  With box, piano and drums, they are probably closer to the sound that most people would associate with a ceili band.  They provide a rich driving sound with all the instruments well balanced and the players keeping tightly to the settings.  Having so many fiddlers in the band I suppose the choice of tunes is likely to favour the fiddle so there are a couple of Charlie Lennon compositions, one from Sean Ryan and one of Jim McKillop's.  Box players seem to be a good source of tunes too, with Finbarr Dwyer credited with two reels, Kevin Loughlin, the wonderful three row box player from Beleek is acknowledged in another reel, and the inevitable march is composed by the Co Wicklow box player Seamus Dowling.  But it's the fiddle that dominates in the end.  For instance, two of Michael Coleman's great sets from the 1930's are included, the Tarbolton set, and O'Rourkes/ The Wild Irishman included in a mighty four reel marathon.  There's a nice break about halfway through when the fiddles start The Lady's Choice with a simple bodhran accompaniment before the full ceili band returns for the second and third tunes of the set. 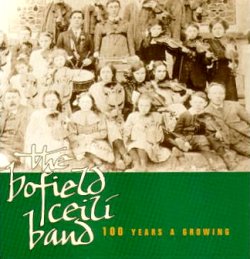 If I have any complaint with the CD, it's that the band end every track but one very abruptly, almost taking you by surprise with the suddenness of it.  That aside, this is a well produced album with a nice history of the band in the sleeve notes and a few words about each of the current members.

The Bofield Ceili band from Mayo recorded their CD early in 2000 to celebrate 100 years of local music making.  The Bofield is built around four flutes with fiddles, box, and the customary piano and drums.  This is a very unusual combination but makes the whole sound of the band light and clean.  The CD kicks off with a nice "doubled" version of the Mountain Top and offers a fairly standard selection of jigs reels and hornpipes, included Cooley's Hornpipe composed by Paddy O'Brien of Nenagh.  While there are few new tunes or combinations on offer, the refreshing sound of a flute driven band makes this CD well worth a listen.  Sleeve notes tend to be fairly brief affairs on these records, but the notes on this CD are a real disappointment and don't even list the band members - all you get is a photo of the band.  Fortunately, there is an article in the winter 2000 edition of Treoir which fills in a lot of the gaps.  A companion CD was recorded at the same time which features solos, duets and small groups.  This apparently will be available shortly, and should be worth seeking out.  There is a book to accompany the whole project giving a potted history of music in the town and surrounding areas packed with photos, maps and manuscripts, and a web site is nearing completion.  This really is a community effort and deserves praise for recording and promoting the local tradition.

The Táin made their CD just before they won their "Three in a Row" at the Fleadh Ceol last year putting them in some very illustrious company. 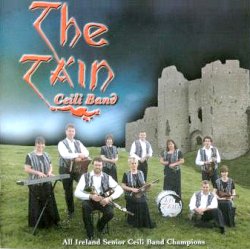 The band has a fine mix of instruments, two flutes, three fiddles, box, concertina and uilleann pipes - a ten piece band yet no instrument seems to dominate.  The over-riding impression is just how well the instruments are mixed, including the piano and drums.  The playing itself is extremely tight and because the drums and piano are fairly well back in the mix, this doesn't sound like a ceili band record, more like a very well recorded session.  The band was started by Peig McGrath, the great Sligo flute player, who sadly died a few years ago.  The CD includes an RTÉ recording of Peig with Bridie Lafferty on piano.  Solo recording of Peig are rare although she did make a record some time back called Cherish the Ladies with Kathleen Smyth on fiddle, so this is a nice tribute to a great musician.  The sleeve notes are pretty good and the Táin have put the duration in bars of each selection so that dancers can programme in a full set, although I could only manage to spot the figures for a Lancers set at a quick glance.  There are neat snapshot biographies of the band and a brief line or two about each tune.  Many of the tunes are well known but there are enough local and newer tunes to make for enjoyable listening right through the CD.  Composers credited include Finbarr Dwyer, Sean Ryan, Eddie Kelly, Josie McDermott and Paddy O'Brien.  It's nice to hear ceili bands taking up the tunes Paddy O'Brien wrote in the seventies and eighties for the Ormond Ceili Band.  Overall, this is a highly recommended CD.   Contact: tainceiliband@hotmail.com or phone: Padraig Donlon on (00353) 42 93 30387.

If you're a player or a dancer, these CDs should give you plenty to enjoy.  If you're just a listener, put aside any prejudices you may have about ceili band records, invest in the Táin and at least one of the others and experience the sort of music that's designed to get your feet tapping.