Own label - No Number

Back in the days when he had more money than sense, a certain friend of mine would gouge additional grooves into records to ensure, as a consequence, that those tracks he disliked were skipped by the needle.  Of course, when he later had more sense than money, he found himself with a heap of unsaleable vinyl and regularly being sneered at by Nottingham's own especially surly brand of second-hand record shop assistants.  In subsequent years I sometimes wondered whether the advent of the compact disc player and its programmable facilities had been invented with him in mind for, certainly, his fingers would be fiddling with the remote control's buttons to erase certain tracks from this debut album by Céide to create his own version.

In an interview in the current edition of The Journal of Music in Ireland (Vol.  2, No.  2), the Cork singer Jimmy Crowley railed against the encroachment of 'mid-Atlanticisms' into Ireland's music:

"You see this a lot in younger people, I'm afraid.  If someone from Kerry, say, sings an Irish song in an LA accent, that's the end of my interest.  But if it's a Kentuckian singing in a Kentucky accent, that's great, of course.  I'd criticise some singer/songwriters for these American accents.  There's no worth in this mid-Atlantic stuff, they haven't been true to their culture, to the land they're living in.  Often too, the songs aren't saying anything either."

There are many exceptions (for example, Danú, Altan, Dervish, Providence etc.) where singers have remained true to their roots and, importantly, their voices, 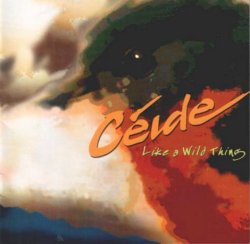 but also far too many cases where songs from other genres are interpolated into the band's repertoire and delivered in the kind of accent that Jimmy despises.

As such, it is questionable whether Mr Crowley would be especially enamoured with Céide's album Like a Wild Thing and, especially, the band's singer, Declan Askin, who has three outings of variable worth on the album.  The first is John Martyn's John the Baptist from the 1970 album Stormbringer recorded with his wife Beverley.  In the Martyns' hands, the song was an epic with the contrast between the pair's voices and the subtlety of the arrangement highlighting the latent violence of the relationship depicted in the lyrics.  While noting that Scullion also recorded the song in 1979, Céide inform us that "To improve on such history is very difficult, if not impossible, but we have tried to give the piece a contemporary groove, while highlighting the song's unusual lyrics'.  Actually, they've turned it into a jaunty little singalong with Askin's mid-Atlantic drone and quasi-rock singer intonations to the fore, thereby losing any of the song's quirky impact.

Next up comes the title track, written by a County Mayo man, Tony Reidy, a song about the economic exigencies of a small farmer forced "To make a living I must sit at a chair, Sit at a chair and stare at a screen".  This is far more successful and entirely because Declan forsakes any extraneous accents and sings in his own voice.

Lastly, however, comes a rendition so horrific that the album case should carry a warning sticker, a song interpreted so terribly that it makes Dessie O'Halloran sound like Christy Moore.  The song in question is Lyle Lovett's If I Had a Boat.  Céide's notes state that their "arrangement, while deviating quite considerably from the original still shows what a talent Lyle is".  It certainly does, but not in the way the band intended.  Askin sings as though he's auditioning for a biopic of Michael Bolton, albeit while suffering from a hernia and, as a consequence, manages to miss all the ironic humour of Lovett's lyrics.

The question is ultimately, of course, why a band based in Mayo should want to sing about Roy Rogers, Trigger, the Lone Ranger and Tonto (as Lyle understandably might) rather than about their own childhoods or locality (wherein lies part of the success of Like a Wild Thing.

If this was not bad enough, Céide have employed one of modern musical technology's most irksome innovations, the hidden track.  Islay Rant, though included in the track listings, appears several minutes after its predecessor.  The novelty of this device has worn thinner than a cigarette paper.

There is one further feature of Céide which may irritate some - the presence of a double bass player, one Kevin Doherty.  In the Crowley interview quoted earlier, Jimmy also attacked what he sees as the increasing commercialism of Irish music:

"One result is that it's getting bland, and Ireland was never bland.  Much of it sounds boring to me, too many not-very-good clones of the Bothy Band."

To this I would add a new phenomenon, the sub-Lúnasa clone and one that is likely to reappear thanks to the sales of their last album, The Merry Sisters of Fate, and its subsequent critical acclaim in the USA.  Like a Wild Thing's opening track, yet another version of The Bucks of Oranmore, simply sounds too close to Lúnasa for comfort (albeit there's accordion instead of pipes, but the bass drone gives the game away and elsewhere Céide employ some of Lúnasa's trademark rhythmic shifts).

That being said other parts of Like a Wild Thing are at times excellent and others delightful.  The best moments feature the flute and low whistles of Brian Lennon, a member of the prominent musical family from Leitrim (he is the son of Ben the fiddler) and one of the most lyrical players around.  Equally, Tom Doherty is no mean accordion and melodeon player and well to the fore on a set of jigs kickstarted by The Woods of Old Limerick.  Fiddler John McHugh, however, hardly gets a look in until the very last track (not the hidden one!) where his rendition of the slow jig The Pullet that Wants the Cock has all the kind of lugubrious qualities that make you check his photograph for signs of a pension book.