Growing Up in Irish Music, A Memoir
by Paddy O'Brien 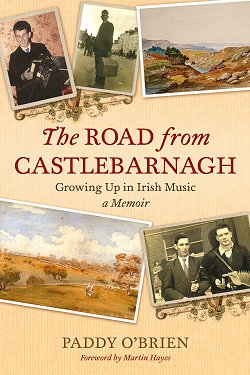 Paddy O'Brien is a well-known button accordion player in the Irish tradition, born in Ireland but evidently long resident in the United States.  (Further information about his current work and music may be found at http://paddyobrien.net/.)  This book, however, is a memoire of the first twenty or so years of the author's life from his birth in 1945.  O'Brien's writing style is straightforward and engaging.  There are several pages of rather atmospheric black-and-white photographs.

The book's subtitle Growing up in Irish Music perhaps summarises the two elements of author's agenda, which do not always sit comfortably together.  On the one hand, there is the theme of music; the author is a professional musician, there is a foreword by fellow Irish emigre, the distinguished fiddler Martin Hayes, and this review is for a music magazine.  On the other hand, there is the social theme of growing up in a rural area (County Offaly) in an Ireland of the 1950s and 1960s, spiced with anecdotes about family, friends and the occasional legend.  Let us examine these themes in reverse order.

O'Brien clearly grew up in a loving family, surrounded by a community that is shown to be mutually supportive.  Apart from some evidence of rough treatment by a teacher, there is none of the institutional repression or brutality that is portrayed in some other accounts of the period or has surfaced in recent scandals.  The author's childhood was passed in a thatched cottage without running water or electricity, heated by a turf fire.  As he grew up, he was expected to take an increasing role in helping his father maintain their small farm, and there are good descriptions of some of this work, which was clearly seen as normal and not at all resented by the growing boy.  These constitute a genuinely interesting social document.  After leaving school, the author obtained an apprenticeship at the Boora Workshop, which maintained earth-moving plant, necessitating his moving into lodgings so as to be near his work.  His description of the somewhat relaxed and unstructured approach to training and work will be recognisable to others who have served apprenticeships in large 1960s organisations.

The author's parents gradually fade from the account as the narrative progresses, which I would imagine would be the case for many of us were we to write our own memoires.  Again, these are interesting social observations and I enjoyed this aspect of the book much more than I had expected.  A sketch map would have made it easier to make sense of some of the to-ings and fro-ings.  In contrast to the centrality of the author's father and mother, his siblings (all sisters) are almost absent from the story and it would have been interesting to learn of their roles in the domestic economy, and of whether and how they and their friends socialised with their brother and his friends.  The book ends with a very brief summary, but it might have been better to end by saying something about O'Brien's eventual emigration to the US, as it is left to the reader to discover from the cover blurb that he is now resident in St Paul, Minnesota.

As noted above, the book is marketed with considerable emphasis on its author's undoubted musical credentials.  As a box player myself (albeit not in the Irish tradition) I would have been interested to read O'Brien's reflections on his playing and music.  These are not entirely absent, but my initial reaction was one of disappointment.  The importance of the battery-powered radio as an ephemeral source of tunes and information about musicians (and the practical difficulties of maintaining this kit) are well described.  The later part of the book contains some nice descriptions of playing in competitions and dances, but the value of these is as much in social as musical description.  Otherwise, apart from learning that the author's first instrument was a mouth organ, followed for many years by a single-row melodeon until he was earning enough to purchase a two-row C/C# button accordion (the choice of which he regretted, though we are not told how this was resolved), the reader is given little other than an impressive number of allusions to tune titles, which will mean little to anyone not well-versed in the Irish tradition.  (Indeed, O'Brien is evidently particularly well-known for his immense repertory of rare tunes.)

On reflection, though, my disappointment with the musical theme of the book perhaps reflects the genuine difficulties in producing a volume that is both of general social interest and specific musical interest.  Greater emphasis on the latter might repel the general reader.  I suppose that this problem might have been partially addressed by an accompanying CD of musical examples, but this would presumably have increased the book's price.  Moreover, the content of such a CD might be open to the objection that it would not reflect the author's playing as it was in the period covered by the book.  As the great tenor saxophonist Lester Young is said to have remarked when asked in the 1950s to play as he would have done in the 1930s: "I can't do it ...  This is later; that was then." (Gelly, D: Lester Young, p.164, Spellmount, Tunbridge Wells, 1984).