A Call from the Musical Heart of Cavan

Asked to name an Irish county with a strong musical tradition, most people would plump for somewhere on the west coast, perhaps Clare, Galway or Sligo.  County Cavan would feature pretty low on the majority of lists, if at all, reflecting its overall status in Ireland. 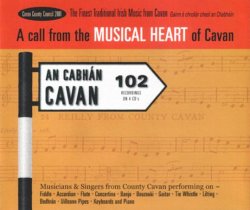 Although not one of the country's smallest counties geographically (at 730 square miles it is bigger than Sligo and more than twice the size of Louth, for instance), it does have a relatively tiny population which the 1996 census recorded at a mere 52,796, a tenth of which lives in the county town.  Though picturesque in places, especially the loughs and mountains in the county's west, Cavan is far from the beaten track as far as most tourists are concerned, unless they are interested in fishing or boating on the Shannon-Erne waterway.

Yet, despite its small size and much emigration over the centuries, Cavan actually does have a thriving traditional music scene, even if sessions can be hard to track down (head for Killeshandra!).  Musically, the county's most famous son is Ed Reavy, though he emigrated to the US as a teenager.  From the same era came Johnnie Maguire, best known as a tin whistler who spent most of his adult life in Belfast (where his son, the fiddler Seán was born in 1926 - Seán, of course, prefers McGuire as his surname).  More recently comes the fiddler Antóin Mac Gabhann and he too is a Cavan exile, living nowadays in County Meath, while another well-known figure who does still live in the county is button accordionist Martin Donohoe.

Donohoe is the driving force behind this gargantuan collection, a four-CD set, co-funded by Cavan County Council, Foras Áiseanna Saothair (Ireland's Training and Employment Authority) and Millennium 2000.  This is very much a snapshot, albeit pretty panoramic, of the county's musical present, a synthesis of what Martin Donohoe calls "Smell of the Bog" recordings, featuring no tricks of the production trade, but just a plethora of musicians keen to share their goodwill and varying degrees of expertise.

As such, this is a staggering achievement, consisting of 102 tracks, the vast majority recorded at The Ramor Theatre in Virginia.  Nearly a couple of hundred musicians are represented, in various combinations.  So, there are plenty of unaccompanied singers and the occasional duet, and a galaxy of fiddlers and accordionists though far fewer flute players and whistlers by comparison, and just a handful of uilleann pipers.  Although there are many unaccompanied instrumental tracks, there's a substantial number of duos and a smattering of trios, plus a couple of céilí bands and other larger ensembles.

Certain surnames regularly reappear in the listing, reinforcing the families' role in the endurance of traditional music, and many of the musicians are comparatively young, indicating also the current strength of musical education in Cavan.  There are a few archive recordings here too, one of which features the late Dr Brian Galligan, a flute and whistler, founder member of CCÉ and its national president from 1954-1956, while another comes from a 1982 local radio broadcast and includes a rather well-known interloper from Co Roscommon on flute (one Packie Duignan who was in the area for the county fleadh).

Reviewing such a sprawling collection in any detail would be arduous and ultimately unrewarding for both reviewer and reader.  Rather, it's far better to say that each disc has plenty of gems.  It might be a song that catches the ear (such as Tommy Sheridan's eulogy to Cavan's 1952 All-Ireland Gaelic Football final success - the last time they won!) or a fine duet rendition of Bold Doherty by Paddy and Kevin Branigan.  Alternatively, it might be Séamus Fay's lilted hornpipes or Vincent Tighe's mellifluous fiddle on The Gold Ring jig or Donohoe's own energetic accordion.  Other tracks might grate the ear (such as the staggeringly mawkish country and Irish Convent Way up on the Hill) or, occasionally, be too contemporary for the liking of some, but this is very much a musical road map of Cavan and as bouncy as many of the county's roads (thankfully, with fewer loose chippings).

An esteemed critic writing elsewhere expressed his disappointment at the inclusion of only two Ed Reavy compositions in this collection to which the retort might be, "Why should there be more?"  Two Reavy tunes amongst the myriad here seems to me a pretty reasonable reflection of the national repertoire.  For instance, my own partially completed database of Irish traditional albums, which so far covers more than six hundred releases, indicates that Reavy's tunes are not recorded as often as might be expected.

Finally, for anyone wondering whether this collection serves to establish a previously ignored regional style, the answer is definitely a negative one.  Indeed, this pudding's proof is entirely the opposite point that, like much of Ireland, Cavan is clearly a melting pot where local influences and styles gleaned from the wider world coexist.  Certainly, several of the fiddlers exhibit stylistic similarities, especially in tone, to neighbouring Fermanagh or Leitrim, but there is nothing here to suggest something conceptually different.

The collection includes a sixteen-page booklet, the bulk of which consists of track listings.  More information about the musicians appearing on this release, details about traditional music in Cavan and how to buy this remarkably cheaply priced collection can be found at www.cavanmusic.com.