Own Label, no number 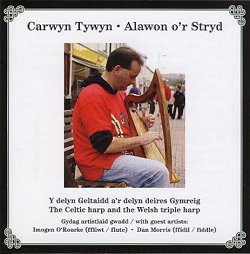 I'm not entirely sure why I'm reviewing this CD - maybe my own distant Welsh ancestry is making itself felt?  But about half the tunes are said to be traditional, while the rest are all composed by the harper Carwyn Tywyn.  What little we know of the harping tradition in these islands indicates that most such musicians played a good deal of self-composed repertoire - so I guess that's fair enough.  Also, we have little or no knowledge of what Welsh traditional music sounded like, since there are no recordings - so I'm not in a position to judge the extent to which Carwyn follows or deviates from such a tradition. 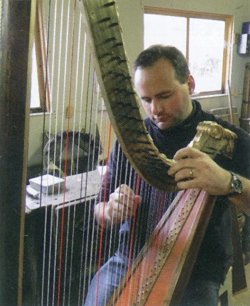 Also, there is apparently only one other CD available of the music of the Welsh Triple Harp, so it would seem a shame to miss out on this one.  Here's track 1 Alaw i Dawn Evans as an example.  Carwyn Tywyn wrote to me saying that although he has played the harp for twenty years, this is the first time he has made a recording, and so would 'greatly appreciate a constructively critical review of his work'.

Well, so prompted, here goes.  I like it! - though with some reservations.  The music is completely uncontentious, sounding very similar to much else to be heard in the traditional repertoires of these islands.  Also, I find it impossible to distinguish between the trad and the self-composed tunes ... so that's good.  The playing throughout is excellent, and the addition of flute (Imogen O'Rourke) and fiddle (Dan Morris) nicely complements the harp(s) on may tracks.

A criticism might be that many of the tunes sound rather similar - but I'm sure that this is as much due to a lack of knowledge on my part as it is to the qualities of the music.  It was not for nothing that the music to be heard in so many Irish sessions in the '70s and '80s was known by the general populace as 'schitheredee'.  Another criticism, although really only regarding music on a CD, which will be played over and over again, is that most of the tracks just 'stop' at the end, rather than having some sort of final flourish.  Some variation of approach would have been preferable.

The tunes chosen show a little variation - there are polkas, hornpipes, waltzes and one jig.  The preponderance of tunes in four-time tend to mean that the 'chung' of the backing chords can get a bit repetitive by the end of the CD's 41 minutes playing time, so a few left out here and there would have been helpful.  All these criticisms apply, of course, only to a CD presentation such as this, not to the individual tracks themselves.  These are all excellent - and so here's a clip from the final track, Glan Brán / Ffidl Ffadl, to let you hear the trio in full flow, and send you happily on your way.