Yeh, that's all it is 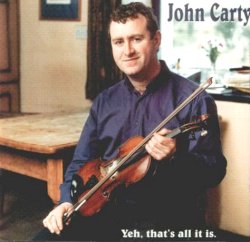 Thirdly, he is probably better known in his birthplace, London, than he is in Ireland, despite his regular role as a tutor at summer schools and tours by his band, At the Racket, specialists in the Flanagan Brothers inspired dancehall music of the 1920s and 1930s.

John's first album, The Cat That Ate the Candle (Cló Iar-Chonnachta CICD099, 1994), recorded with his long-time collaborator, pianist and banjo player Brian McGrath, was very much a banjo album.  The second, Last Night's Fun (Shanachie 79098, 1996) again saw McGrath as the main accompanist, but largely featured Carty's fiddle, though both flute and banjo received an outing too.  Many thought that his next album might possibly be flute-focussed, but John has resisted the temptation and Yeh, that's all it is not only reinforces the strengths of his fiddling, but sees another instrument introduced - the tenor guitar.  Brian McGrath is again on hand while Arty McGlynn's guitars add another considered element to the mix.

Carty's family roots lie in County Roscommon and he has been based there himself since the early 1990s.  Boyle sits close to the borders of both Sligo and Leitrim and John is himself firmly rooted in the region, partly influenced by his father, John P., himself proficient on banjo and flute, who played with London's Glenside Céilí Band.  John's notes include especial reference to the influence of Michael Coleman and Fred Finn (both, of course, from Sligo, but he is also imbued by the recordings of other notable musicians from North Connacht.  Nevertheless, his repertoire is much broader than one might expect and Yeh, that's all it is sees tunes drawn from a variety of sources, while the album's title, by the way, comes from a brief descriptive statement from Arty McGlynn which introduces track 3, John's own composition, Seanamhac Tube Station.

So, as might be expected from someone who grew up in London, John's version of George White's comes from the Clare accordionist Raymond Roland, Liam Farrell's (a.k.a.  The Boys of Ballysodare) is a slip jig learned from the Co.  Tyrone banjo player, while Paddy Fahy's Hornpipe comes from the Connemara flute player, Marcus Hernon, who was also resident in London in the 1980s.  Yet more tunes derive from London-Irish sources, The Barge Inn, one of Paddy 'Nenagh' O'Brien's was learnt from the Connemara box player, Seán McDonagh, while Eileen O'Brien's comes from the playing of the Leitrim fiddler, Brian Rooney, and the Wexford accordionist, Paddy Hayes.  For good measure, John also includes the reel, The London Lasses, coupling it with Sligo Maid.

Carty's fiddle tone is ever plangent, bright and ringing and perfectly suited to his repertoire.  McGrath and McGlynn are two of the finest accompanists around and, all in all, this is one of the best Shanachie releases for some time.