Lost in the Loop

One of the gifts of a true artist is the power to make familiar things seem strange, while making things that are strange to us seem familiar. 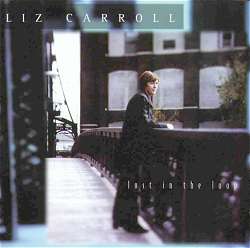 Liz Carroll does both superbly on her new CD.  It offers exciting treatments of standard session tunes, and a bunch of original compositions which deserve to become standards themselves (and feel as though they already are).

It's no big deal for a competent fiddler to create a new melody by stringing together a bunch of routine phrases, while the rhythm section runs on autopilot.  It's more fun to spice up the traditional formula with a few sour-sweet riffs borrowed from Stravinsky, or Miles Davis, that leave guitarists groping for appropriate chords.  But it's a far greater achievement to create a tune that's as striking as a brand new jacket, yet comfortable as an old pair of brogues.  Liz has that magical touch.  Whether it comes from inspiration or from application is difficult to tell.  (And so it should be - for as Fred Astaire once said, "if it looks difficult, you're not working hard enough".)

Since winning the all-Ireland Senior Fiddle Championship in 1975, Liz has earned a world-wide reputation as a hard-working musician.  Chicago, her home city, honoured her achievements by declaring 18 September 'Liz Carroll Day' in 1999.   Further information about her past achievements and present activities can be found on her web page - http://www.lizcarroll.com/ is its current address.   This new record confirms her status as a virtuoso interpreter of traditional material, as well as highlighting her composing ablitities.  The notes don't state whether Liz did the arrangements too.  But whoever was responsible deserves credit for organising a lively yet disciplined accompaniment, ranging from a single guitarist on some tracks to a five-piece band on others.  Liz's fiddle is always well to the fore, but the other players also get opportunities to demonstrate their skills.

It's often said that the surest test of a musician's quality is a slow air.  Measured by that standard Liz earns first class honours, as composer and performer.  Her Lament of the First Generation is particularly impressive - it has the same timeless feel that made Jay Ungar's Ashokan Farewell such a hit.  And her collaboration with Dáithí Sproule on his beautiful composition, The Crow in the Sun, is just as ravishing.  In both performances, the emotion is allowed to flow freely from the melody, rather than being wrung out of it with melodramatic tricks.  There's a similar restraint in The Ugly Duckling and Letter to Peter Pan.  One is a jaunty toddle, and the other a gentle lullaby, but although both have a childlike innocence, neither displays the slightest trace of sentimentality.

On her up-tempo tunes, Liz lets fly with a formidable battery of techniques.  Flurries of grace-notes, dramatic slurs, and rhythmic accents on double-stopped or drone strings are used in a way that supports the melody, rather than distracting attention from it.  Her inventiveness is equally evident in original compositions like Lost in the Loop and in old war-horses like The Flogging Reel.  (Apparently this used to be called The Flagon Reel, until some masochist re-named it.  For my money, a flagon beats a flogging every time - but in a free country, everyone's entitled to their own opinion ...)

In almost every aspect, this is a great record.  The sound quality is excellent, and the studio staff deserve medals for their work.  My one grumble is that the information provided with the CD should have been more extensive, and a lot more legible.  Printing sparse liner notes in small white letters on a blurry blue-black background gets full marks for style, but minimal credit for communication.

However, it would be a pity to end on a downer, so let's conclude with a mention of Liz's exciting treatment of an old favourite, The Silver Spear.  Her version is noticably different from the one commonly played over here.   The 'A' music is simplified a bit, giving it a more aggressive, urgent feel.  In contrast, the 'B' music is enriched with some dark minor chords, and a descending run that provides a brilliant alternative ending.  As chorus follows chorus, we get a string of melodic and rhythmic variations, decorated with bouncing triplets and cheeky pizzicato twangs on open strings.  The whole piece belts along at a pace that's breathtaking, but never breathless, before sliding seamlessly into the next tune of the set.  What else is there to say but "Wow!"?  Nothing much comes to mind except "Buy it!"