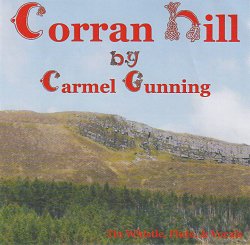 Readers of Musical Traditions will not, I suspect, be terribly familiar with the name of Carmel Gunning.  If so, that is a pity for she is one of the finest whistle players in Ireland, as well as being a first class flute player, singer, composer, teacher and music school director.  In short she is a tireless worker for Irish music.

If I’ve counted correctly this is Carmel’s 4th solo CD, and it does more to showcase her range of talents - including the teaching - than any of its predecessors.  Of the songs, we hear two in Irish; an unaccompanied Dónal Óg, and a delightful rendering of the children’s song An Greasí Bróg (The shoemaker).

There are no translations of either song unfortunately, although Dónal Óg is widely known both in English and Irish.  An Gréasaí Bróg (sound clip) is less commonly encountered (though not one suspects among Gaelic speaking schoolchildren), but a version of the song turns up on Topic CD TSCD518D; Seosamh O Héanaí, The Road from Connemara, and you can find a translation of it at www.mustrad.org.uk/articles/heaney3.htm

The topography of her native Sligo informs a large part of what Carmel Gunning does, and this disc is no exception.  As well as two self composed tunes, both named after local landmarks, three of the five songs in English are by local song makers.  Of these, two are place name songs, a genre which does not always earn plaudits for poetic quality.  However, while the sentiments of these two are fairly routine, they are textually very commendable.  And you would need a lot more than two songs to give vent to beauties of Sligo!

The other local song is a ballad called The Geevagh Prisoners, which relates the arrest in 1908 of ten Geevagh men for obstructing the delivery of farm eviction notices.  I’m in two minds about this one.  While songs of landlordism bear crucial witness to Britain’s appalling record in Ireland, it could have told its story more effectively had some of the less important detail been removed.

So to the instrumentals.  It is probably as a tin whistle player that Carmel Gunning is best known, and the tin whistle playing here demonstrates just how good she is.  Her tone is never less than crystal clear; her rhythm is bouncy and sure footed; the pleasingly sharp finger work is reinforced by what jazz musicians indecorously call slap tonguing; and there are plenty of tasteful melodic variations to keep the ear engaged. (sound clip - The Moving Cloud)

There are also two sets of tunes played on the flute, and I admit to feeling dubious when I saw that the air An Chúlfhionn was amongst them.  Surely, I thought, a less venerable warhorse would have been more appropriate.  In fact it is played with such delicacy and restraint that I was reminded of the late Paddy Taylor’s prowess at playing slow airs.  And the way the tune morphed into The Stack of Barley simply reinforced the impression. (sound clip - An Chúlfhionn)

I mentioned Carmel’s teaching earlier, and it shows up in the form of a solo guest appearance by one of her pupils; Orlaith McAuliffe from London.  The two reels she plays, Jean’s and Colonel Frazer, are my only experience of hearing Ms McAuliffe.  But stunning as this track is, it seemed to me somewhat stronger on virtuosity than emotion.  Even so, I’d guess that the rigours of life will seep into her playing with time, and I look forward to hearing a lot more from this remarkable young player in the future.

The disc contains a pleasing balance of accompanied and unaccompanied tracks.  Moreover, in a genre where accompaniments are all too often formulaic and distractive, the ones here are so varied and imaginative that I almost wish they could have been issued as a supplement to the main CD.

This CD will shortly be available on the Internet.  In the meantime, it can be bought directly from Carmel for €17 at 4 Church View Crescent, Ballytivnan, Sligo Town, Ireland.  Or e-mail: carmelgunn09@gmail.com   Released June 2008.  Details of the music schools which Carmel runs can be found at http://www.carmelgunning.com