Launched at the Ennis Traditional Festival in November 2003 this is banjo player Angelina Carberry's second CD of duets with accordion. 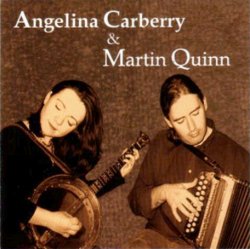 The first was recorded with her father, this time the box is played by her husband Martin Quinn.  They are joined by John Blake on guitar and piano, and on the first track, by Alan McCartney on guitar.

The pace is steady and has plenty of swing.  There is a natural understanding between the two players which gives a sense of ease in the tunes and allows the music to flow.  Angelina is a tremendous banjo player who uses the rhythmic nature of the instrument to great effect.  She doesn't deviate from the basic tune but manages to impart subtle variations by very thoughtful use of ornamentation.  The banjo doesn't offer much ornamental variety and it can be very tiresome if the standard treble is overused.  Angelina avoids this and uses some nice chords to emphasise the rhythm.  She holds the tunes together as Martin sometimes holds long notes and chords on the box.

The selection of tunes is a very pleasing mix of session standards such as The Green Groves and less common tunes such Burne's Reel which is paired with it.  A few relatively recent compositions by Finbar Dwyer, Paddy Fahey and Paddy Hayes are included as well as a barndance written by Martin which sits well in the tradition.  Reels and jigs dominate but a few hornpipes, as well as a slow air and a set of barndances vary the tempo.

Both players take a couple of solos and tonal variety is provided when Martin plays what sounds like a gorgeous old one-row melodeon, as on track 2, Murphy's Hornpipe/The Fair Haired Lass, which harks back to the sound of the Flanagan Brothers at their best.  On most of the tracks Martin plays a Hohner box fitted with Paolo reeds.  The reeds in this box sound close-tuned which gives it a very sweet tone which could be mistaken for a modern Saltarelle favoured by many young players these days.  This sweetness also makes the box sound a bit thin which is particularly noticeable on his solo, the sad modal slow air Aililiu na Gamhna.  On a different box it might have been more dramatic.  His other solo on the melodeon bounces along very nicely with no accompaniment other than a few tasty left hand chords.  Angelina's solos show her dexterity and understanding of the music and she is completely at ease, supported by John Blake's guitar.

The guitar is used very sparingly and several tracks stand very well with only box and banjo.  John Blake is an excellent musician and it is no surprise that he appears as accompanist on so many recordings these days.  He is also no mean flute player, as recordings with the group Teada and his CD of duets with Lamond Gillespie demonstrate.  His knowledge of the tunes enhances his accompaniment.

Modern production techniques provide a true sound to the instruments and the record is very clean with each instrument faithfully reproduced.  The odd sound of fingers on keys or frets serves to create intimacy in the recording.  You could well be sitting in a quiet corner of a bar somewhere in Galway listening to this live.  Credit should go to Paul Mulligan and Dave Brandt for capturing the sound of the duo so well.

The Carberry family continues to go from musical strength to strength and this CD cannot be faulted.  It is a worthy addition to anybody's record collection.  Published on their own label, it is probably easiest to get hold of a copy through one of the Irish mail order shops such as Custy's.