Note: Place cursor on graphics for citation and further information.
Sound clips are shown by the name of the song being in underlined bold italic red text.  Click the name and your installed MP3 player will start.

Landscape of the Past 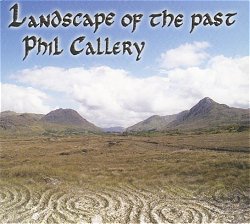 Here's a CD which it would be fair to compare with the excellent Len Graham CD, Over the Hills and Far Away, which I reviewed here last year, were it not for the fact that 6 of the 14 songs here are in fact modern compositions.  Not, I would hasten to add, that this detracts in any way from the quality of what's on offer here - but I'll concentrate on the traditional songs in this review.

We start with Mary Ann Carolan's beautiful In London So Fair - not a well-known song in the tradition, with only 7 named singers in Roud - but one I've heard sung quite often in the revival in recent years.  Despite its title, it seems to be known only in Ireland and Scotland.  Phil handles this perfectly, and it makes an excellent start to the record.  Next comes The New York Trader, a song of supernatural goings-on on shipboard, with the murderous Captain being thrown overboard by his crew to save the storm-tossed ship.  This is a song which seems to have been better-known in these islands than in its native North America, perhaps because of a large number of broadside printings.  I think Phil handles this a little less well, seeming to concentrate more upon the lively tune than the dark text.

Lough Erne Shore, that wonderful song from Paddy Tunney (almost the only person from whom it has been collected), is surely from the pen of a hedge-school master from the north of Ireland, with its references to Greek and Latin mythology.  Phil makes a great job of the splendid tune, and tells the story well - indeed the main difference between this and the Tunney version is the substitution of the more usual Aladdin, for Paddy's Aladdin.  Strange, since that was one of the little things I loved in that classic performance - and one which was, possibly, more correct.  The name Aladdin in Arabic means 'the glory of religion', and can be transcribed into western script as 'Ala ad-Din' - making Aladdin perhaps a more accurate pronunciation.

Craigie Hill is another well-known Tunney Family song, having been collected from Mrs Brigid Tunney in the mid-Fifties.  Despite its soaring tune, this is an instance when Phil seems to concentrate more on telling the story, making this my favourite track on the whole CD.  The Green Fields of Canada is yet another Tunney Family song, which is now far too well-known for me to comment on it, other than to say that it's sung superbly.  Johnny I Hardly Knew Ye is also very effectively sung, although it's not a song I've ever much liked - being a bit too graphic in its gory detail for my taste.

Down By The Glenside (The Bold Fenian Men) is a song Phil learnt from his father, and it was first recorded by the BBC from Nellie Walsh, in Wexford in 1947.  Subsequently, Margaret Barry sang it a lot.  A great song, with its stirring final line, 'We may have more great men, but we'll never have better' - and Phil does it full justice.  The last traditional song on the disc is the splendid Seán Ó Duibhir a'Ghleanna, an English translation of a Gaelic song; a lament for the defeat of the Irish forces at the Battle of Aughrim, 12th July 1691

.  They say that translations never quite catch the true essence of the meaning of the original, but this text should be powerful enough for any non-Irish speaking listener, I would think.  As with the previous song, the last line is a killer: 'May her sons be true when needed, may they never fail (or feel) as we did'.  Again, it has a stupendous tune, and Phil tells the story most powerfully.

I won't go into detail about the composed songs here - it's not within MT's remit - but I would like to emphasise that I have nothing at all against modern songs; a few of them are among my favourites, and one of these appears here; Seán Mone's Lovers and Friends is all that one could possibly ask of a song.  But, in general, they are the ideas, opinions, interests of one distinct person - the writer.  If these resonate with your own views of the world, you'll love the song - but if not ...  The advantage traditional songs have is that they've passed through countless hands and mouths before reaching you, so that the best of them are perfect little jewels which will find a resonance with almost everyone.

This is a great record of a very fine selection of superb songs, beautifully sung.  My only reservation is that an hour's worth all in one go tends to make them all sound a little similar - I'd advise taking three or four at a time to fully appreciate them.

Note: This information was taken from the CD's booklet, but Jerry O'Reilly tells me that it is incorrect.  The song that Phil sings was written in the late 19th century by the literary figure Canon Patrick Sheehan, known as 'Canon Sheehan of Doneraile'.  The Irish language song Seán Ó Duír A'Ghleanna and the translation by George Sigerson is contained in Donal O 'Sullivan's splendid book Songs of the Irish published by Browne and Nolan in Dublin in 1960.  Pages 147, 148 and 149 give the Irish words, Sigerson's metrical translation, a literal translation by Donal O'Sullivan and a very informative commentary on the song and information on Colonel John O'Dwyer of the Glen about whom the song was written.  This Irish language song seems to date from just after the Cromwellian Campaign of 1649-1652 ... well before the Battle of Aughrim.