One of the few perks of this job is that I get to review, and keep, most of the English and all the Italian CDs which come in for review.  I also tend to hang on to those Irish records which take my fancy, and about which I can find something worthwhile (in my opinion) to say. 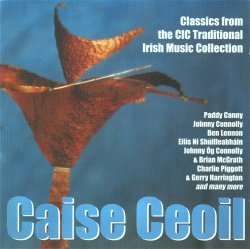 No small number of these have been on Connemara's Clˇ Iar-Chonnachta label, and in this compilation of their finest I'm pleased to see that a number of my selections have turned up as house choices.

Starting at the beginning, we have Johnny Ëg Connolly and Brian McGrath (box and banjo) with The Carraroe and the reel Homage to Rooney, and The Happy Hornpipe / The Souvenir later on the disc.  This is classy, modern-style playing and, while not entirely to my taste, it would take more of a churlish-old-git-traddie than myself to find any fault with it - particularly the hornpipes track.

Next is Marcas Ë Murch˙ (flute); another young, modern player.  I didn't much like this CD when I first heard it and time had not changed my opinion.  The Coalminers reel has a Eb,F,Eb 'hook' phrase which is repeated ten times - so, as the tune is played five times, you get 50 of 'em.  Before halfway through the track you're dying for him to put in a variation of some sort ... but he never does.  This and his second track are faultlessly played, but convey to me not a hint of what he may feel about the music - indeed, they make me wonder if he feels anything at all.

I have an inkling that the compiler of this selection might have felt the same,

because s/he follows it up with the most personal and involving music on the whole disc; the superlative Paddy Canny (fiddle) with The Gallowglass jig.  Anyone with a shoulder to lift and an arse to wiggle will be unable to listen to this without a huge grin on their face.  Words would be utterly inadequate - here's a sound clip.  Paddy's second track is equally compelling, and if you want to hear more, click the sound clip icon at the bottom of our Home page to hear him play a snatch of Poll Ha'penny, and then rush out and buy the CD (Paddy Canny: Traditional Music from the Legendary East Clare Fiddler, Cló Iar-Chonnachta CICD 129).

Marcus and PJ Hernon (flute and box) follow on track four with a couple of their own jigs, and later with two waltzes.  The former track is quite astonishing in that the playing is so staccato that you might almost imagine that they'd learned their style from a Northumbrian piper!  I've never heard playing like this in Irish music before - but that may just be my lack of experience showing.  The first of the two waltzes, The Linnet's Chorus, will undoubtedly enter my repetoire very promptly - a lovely tune!

There are two selections from the delightful Ben Lennon CD The Natural Bridge (CICD139) and the next track is one; Gabriel McArdle singing Flora.  I love what little I've heard of Gabe's stuff, but I feel he was much better represented by his contributions to Dog Big Dog Little, the forerunner of this disc.  Flora is a great song, very well sung, but Edward of Lough Erne Shore is far better, I think.  Maybe 1989 is a little too early for 'some of CIC's most recent work', as this collection describes itself.

Catherine McEvoy's flute playing on tracks 6 and 19 is a little more to my taste than Ë Murch˙'s - but only a little.  In fact, I'm not terribly keen on flutes in general, or of younger players of the instument in particular.  Indeed, young players in general (from any country) seem to have given so much time to mastering technical proficiency that there's very little of them left for communication ...  A great pity, since that, for me, is what music is all about.  Nonetheless, they will be older one day - I just hope I'm still around to enjoy it!

Moving back a generation, we come to Johnny Ëg's dad - Johnny Connolly.

He's a great box player who has recently returned to his starter instrument, the one-row melodeon.  He contributes the reels The Swallow's Tail and Liz Carroll's That's Right Too / The Leading Roll.  This is just delightful stuff - here's a sound clip of That's Right Too ... and it certainly is.  Maybe it's that this simple instrument requires real dedication to bring out the best from it, but I can't think of any (recorded) melodeon music, from anywhere in the world, which fails to please me.

Back another generation we find Joe Ryan (fiddle) with The Old Torn Petticoat / Rakish Paddy.  Two very well-known tunes played in a well-known style ... you're apt just to say "OK, this is quite nice" and move on.  But you stay to the end of the track because it would be wrong to turn off something so obviously right - and maybe play it again the next day ... and then again ... and then you're enchanted.  It would never be a track you'd insist on playing for friends after the pub, but it really is lovely music ... skill, style, tone, taste and heart.  You feel a better person after having heard it.  And much the same may be said for both the tracks by Charlie Piggott and Gerry Harrington, whose New Road CD I enthused about in these pages a year ago - a pleasure to be able to say so of a younger generation of players.

The second song on the CD is the macaronic An Hide and Go Seek from EilÝs NÝ Sh˙illeabhßin.  She's not a singer I'd heard before, and I'm sorely tempted to contact CIC and buy a copy - along with the Paddy Canny and Johnny Connolly discs.  In fact, I think I shall.  But I definitely won't order a copy of Seßn Hernon's record - the combination of whistle (much of which I miss due to hearing loss) and quirky piano accompaniment (far too little of which I miss) is decidedly not my cup of tea.

By track 12 we start getting the second contributions from most of the performers mentioned so far, but there are three further items.  Peadar Ë Ceannabhßin sings three short songs, An Rˇgaire Dubh / Na Ceannabhßin Bhßna / PßidÝn Ë Raifeartaigh.  I think this is the best modern sean-nˇs I have ever heard - although, to be fair, I haven't heard all that much.  Be that as it may, he really is very good and I'm astonished that his CD isn't reviewed in thses pages.  I recognise the cover picture, but can't find any record of having sent it out for review.  Another one to add to the list.  GearˇidÝn Breathnach is another younger sean-nˇs singer I have never heard before - and she's very good.  Though, on the evidence of these two tracks alone, I think I prefer Ë Ceannabhßin ... he seems to have more depth.

Finally - and also the final track - is the Bridge CÚilÝ Band with a set of reels.  I guess this is a good finisher, but it does sound a little out of place after so many solo, duet and small ensemble pieces - and particularly coming straight after a femalesean-nˇs singer!  Nonetheless, you're bopping along by the end of it - but left right up in the air by its abupt finish (mentioned in our review of the CD), so this does feel ike a rather curious choice for a final track.

This excellent record, and those from which the tracks were selected, is doubtless available in the UK from Copperplate Distribution - contact details on our Useful Addresses page.