A Celebration of Friendship and Life

The Irish are a very generous race when it comes to supporting worthy causes.  Traditional musicians and singers give their time freely and the listener is often treated to some wonderful combinations of musicians - some well known, some less so, but always of a high standard. 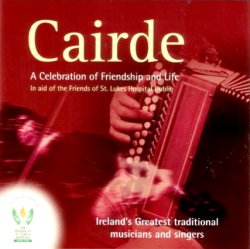 Like the 2 CD set Lámh ar Lámh and the excellent Lán Duchas, both released just over a year ago, this present issue is a hospital benefit CD.  In this case the hospital is a Dublin radiotherapy unit.

Sean Henry runs a bar in Portumna which has been host to many a good session over the years.  Sean contracted lung cancer in 1998 and this CD is his "victory celebration" and way of saying thank you to St Luke’s Hospital.  He has been assisted in achieving this by Joe Burke and Anne Conroy-Burke who liaised with the musicians; Charlie Lennon who made his studio available for recording and by Tom and Debbi Fitzgerald of St Louis, Missouri, who funded the production costs.

So what do you get for your 20 Euros?  75 minutes of music and song over 22 tracks, 12 of which were specially recorded for this CD.  Well known players such as Frankie Gavin, Matt Molly and Sean Maguire contribute tracks from their latest CDs.  Others like Mary Bergin, Tommy Keane and Jacqui McCarthy, John Regan, Martin Connolly, Mary Staunton, Charlie Piggott and Miriam Collins, and Marcus Hernon offer tasters of CDs which may not be as well known as they should be.

The newly recorded tracks offer some outstanding performances and three or four of these alone would make the CD a "must have" record.  Noel Hill and Tony Linnane, reunited in a studio after more than 20 years, play three reels that just remind you what tremendous duet players both men are.  A solo interpretation of The Frieze Britches and The Lark in the Morning from Tommy Peoples is simply breathtaking.  Eileen O’Brien and Deirdre McSherry play two of Paddy Fahey’s reels on fiddle and flute in a style that you could listen to all day.  Don Stiffe and Matt Keane make a great job of the song Mary from Dungloe.

There are box players a-plenty.  Anne Conroy-Burke shows that she doesn’t play second fiddle to her husband Joe, who himself gives a soulful version of the slow air My Lagan Love followed by a couple of reels.  Jimmy McGreevey only ever appears on these benefit records, which is a great pity as he is a good lively musician.  It sounds as if he’s playing a newer Saltarelle which, to my mind, doesn’t have the rich character of his usual old black Paolo.  Oliver Deveney, a young All Ireland Champion melodeon player from Oranmore, shows great understanding and rhythm in his exuberant playing of two fairly recently composed reels on an old B/C box.  His is a name to look out for in the future.

Overall, this is a good sampler of CDs by a range of musicians mixed with some great one-off recordings.  The quality and variety of music make the CD both interesting and enjoyable.  The production standard is very high, as you would expect from Charlie Lennon’s studio and while the sleeve notes may not be as extensive as some, there is enough to put each track into context.  This is a recording that comes highly recommended.  Order it on-line from: www.friendsofstlukes.ie