Hard; Albion; Bleary Winter; Lord Bateman; One in a Million; Our Captain Calls All Hands; John Barleycorn; Walk this World. 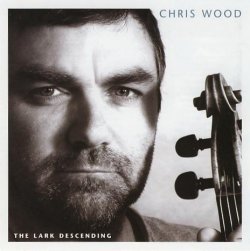 Not, I suppose, the sort of CD you might expect me to be reviewing in these pages - only three of the eight songs are traditional - but one which I'm pleased to bring to your attention because of its overall quality and because three of the composed songs are so compelling.

I've known Chris Wood for a very long time, though never particularly well - mainly, I guess, this has been because we've never been involved in a joint musical project.  When I have encountered him, it has almost always been as a part of a small group (of which there have been quite a number), and by which I have always been slightly disappointed.  However, as a solo performer, I have always found him riveting - and as an unaccompanied solo performer, particularly of ballads, I think he is almost unsurpassed.  So I was very interested to hear this, his first solo CD.

Given what I've just said, I was much saddened to find no unaccompanied songs on the record, although there is one track, Our Captain Calls All Hands, with just solo fiddle behind the voice, which is almost as good.  In fact this is my favourite track on the whole record - not just because it's a great song (why have I never learned it?), but because of the nature of its performance.  Chris's singing here might be cited as a paradigm of melodic variation.  Indeed, he uses the technique so much that, on the first encounter, one is tempted to think that he's using a different tune!  The fiddle hints at the underlying melody here and there,

but it's a chilling thought that many listeners who have bought the CD due to fRoots' recent praise of it, may be completely unaware of what's going on, so unused are they to this sort of subtlety from other revival singers.  His phrasing and variations in tempi are also very well-considered, and very well worth your attention.  One verse (they're all different) can hardly convey the quality of what's on offer here, but it will have to do. (sound clip)

Of the three composed songs I mentioned earlier, two are by Chris himself, and one is by Hugh Lupton.  This last, One in a Million, is a real ballad, and lasts for almost 10 minutes!  It tells a beautiful story beautifully, and you will be left with tears in your eyes at its end - unless you have a heart of stone.  But for true class, go to the first two tracks of the CD - Hard and Albion.  The first is an account of his realisation of, and delight in, his six-year-old daughter's emerging character.  It's completely enchanting - so much so that I can readily forgive the easy clichť of the final line.

Albion is a very different song; dealing with our hateful legacy from the Thatcher era.  It tells, in a few short lines, the true story of Chris and his little son, whilst walking in the park, finding a young man hanging from the branch of a tree.  Nearby, parents are discussing the future education and prospects of their toddlers.  He ends Albion, I'm homesick now, though I live in the town where I was born.  I'm sure I'm not alone in having often felt exactly the same!  Chris's notes to the song say 'Thatcher was in full sway when this young man finally gave in.  Never before or since have I felt such a stranger in my own land.'

I commented upon the CD's 'quality' earlier.  Not only is it well recorded, sung, played, arranged ... but he has clearly given serious thought to almost all aspects of the performance and recording.  I was particularly pleased to find some really long gaps at the end of the more serious songs - to allow you to digest what you've just heard, and to ready yourself for what's coming next.  A very good record indeed.