This, the 20th volume in the School of Scottish Studies 'Scottish Traditions' series, is an anthology drawn from previously issued recordings.  The title, by the way, comes from a Hamish Henderson quotation, 'the carrying stream of tradition', which is, we are told, reflective of the School's 'ethos'. 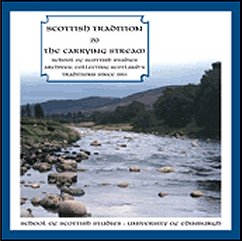 Now a part of the Department of Celtic and Scottish Studies at Edinburgh University, it should come as no surprise to discover that the bulk of the recordings heard here are representative of Scotland's Gaelic traditions.  But, there are also a few songs and tunes from the Lowlands.  Sadly, though, most are already well-known.

Jimmy MacBeath's The Muckin o Geordie's Byre, sung before an appreciative and boisterous audience, is a wonderful choice and is taken from volume 1 of the series (Bothy Ballads).  But, Jimmy is well-represented today on CD, so why not pick something else from the Bothy Ballads album, something by one of the less well-known, though no less good, singers such as Jamie Taylor, Charlie Murray or, perhaps, James 'Blin Jimmy' Bowie whose As I came O'er the Muir o' Ord is as fine a piece of singing as any.  There are two ballads from mother and daughter singers Jeannie Robertson and Lizzie Higgins.  The Battle of Harlaw is again well-known, as is The Jolly Beggar, although Edith Whyte's The Beggin Trade, a version of To the Begging I Will Go is a welcome reissue from a long out-of-print LP.  Jeannie, Lizzie and Edith were all members of Scotland's Traveller community and it goes without saying that the School's archives contain hundred's of hours of recordings by these and other Traveller singers, story-tellers and musicians.  Andra Stewart, another Traveller, was a brother of Alec Stewart (Belle Stewart's husband).  His story Johnny in the Cradle is concerned with a changeling - a fairy left in place of a stolen human child - and is beautifully told in English, although the story is also well-known in Highland as well as Lowland traditions (and, for that matter, in other European traditions.)  Andra was a wonderful story-teller and I will be including one of his other tales, The Three Good Advices, on a forthcoming Kyloe/School of Scottish Studies CD.

As I said above, most of the material on this CD comes from the Gaelic tradition.  Kenneth MacIver, originally from Lewis, was living in London when he recorded a couple of lively examples of mouth music (puirt ŕ beul).  Mary Morrison, from the island of Barra, was famed as a singer of canntaireachd, originally a form of singing used to teach pipe-tunes.  Mary, however, took the canntaireachd way beyond its early form and became something of a vocal celebrity with her amazing musical abilities.  Mary was also a singer of waulking songs and we can also hear a recording of her singing a clapping song, one used at the end of the shrinking process.  Calum Johnston was also from Barra.  A piper and singer, he was one of my favourite Gaelic performers and his song Na Faighinn Gille Ri Cheannach is sung with great feeling:

Oh, if I could manage to hire a lad to take a greeting to Mary, I'd send warm regards to the maid who has tormented me.  Though I gave you no love token I never thought to deceive you, and if I do not wish you well, may I not enjoy good health. (Translation of the 1st verse)

And there was me, thinking that whenever I heard the name Mary in a song, then the origin had to be found in a broadside!

Gaol an t-Seňladair, sung by Peggy Morrison from Harris, is set to a variation of the popular Tramps and Hawkers tune.  Apparently a well-known song, much of the text is formulaic:

On a Summer Sunday as I strolled alone, thrushes were singing high on the branches.  I was thinking of the young man, the loveliest under the sun; I wish I were with you in private converse for a time.

My mother and father and all my kin are displeased with me.  Often do they say to me, “You will never prosper until you forget that foolishness that has been part of you from your youth.” I love the sailor who is ever on the sea.

It strikes me just how similar these ideas are to ones found in so many English and Scottish Lowland songs; although this could not be said of the Reverend William Matheson's Oran Coire Cheathaich (Song of the Misty Corrie), which is full of Highland imagery.

When I woke in the still, clear morning beneath the precipice, this gave me joy; the moorhen with her cackle, huskily chanting, the gallant cock, murmuring with a bow; the lively wren with his tuneful chanter revelling in lusty and melodious notes; the starlings and the robin, with much commotion, singing merry carols of flowing stave. (Translation of verse 6)

Joan MacKenzie's An Till Mise Chaoidh, a song of exile written by Calum MacLeod, a Lewis man then living in Detroit, is also full of remembered landscapes:

I shall never forget the calm, frosty evening with the white swan screeching, as she flew in the bay, the moon so delightful ruling the heavens and the sound of the beach of Uig and Sandwick - Oh, how I liked their music! (Translation of verse 3)

And, in its own way, this simple verse contains a whole layering of meanings, not the least being the grieving brought about by forced migration and the economic situation in the Western Isles.  Likewise, the song Iseabail NicAoidh (Isabel Mackay) sung by James C M Campbell of Kintail.  Set to a tune connected with two pibrochs, the song expresses the kind of feelings that can also be experienced whilst looking at impressionist paintings:

Finally, we have a fragment of the Gaelic psalm Dundee (Psalm 103, verses 1 & 2) led by Norman MacLeod and a congregation from Fifigary, on Lewis.  A recent television documentary suggested that the Gaelic psalms had formed the basis for Gospel singing in the southern states of America.  I don't know that I was fully convinced by the argument, although I was surprised to learn that some African slaves in late 18th and early 19th century America were taught to speak Gaelic, rather than English, by their new Scottish 'owners'.  As these slaves attended Gaelic-speaking churches on a Sunday they would certainly have heard Gaelic psalms.  So, who really knows?

And, just for good measure, there are also a number of instrumental tracks on the CD.  Angus Lawrie's three tunes are played on the Jew's harp, a once popular instrument, though one seldom heard today.  Musicologist Alberto Lovatto has shown that the production of the instrument was centred on the Italian town of Boccorio and that in the 19th century no fewer than 1,536,000 instruments were produced in that one place alone.  Indeed, between the years 1600 and 1850, over 114 million instruments came out of Boccorio!  Whilst in another town, Molln in Austria, some 8 to 9 thousand Jew's harps were produced every day, giving a total of about 2.5 million a year.  (See Alberto Lovatto Primi appunti sulla ribeba in Valsesia.  Bologna, 1983; and Reidar Sevĺg Det gjallar og det lćt.  Frĺskremme- og lokkereiskapar til folkelege blaseinstrument.  Oslo, 1973 [Norsk kulturarv 10] p.126 for further details.)  So why did the Jew' harp decline in popularity?  Well, I would suggest that in Scotland, and probably elsewhere, it was replaced by the louder fiddle which could be better heard during noisy dances.  A pity really, because superb players like Angus Lawrie do deserve to be heard.

And there are two fiddle tracks here, both excellent.  Hector MacAndrew (1903 - 1980) could trace his playing back to the celebrated 18th century fiddler Niel Gow.  Here he performs a set of four popular north-east tunes, three of which were composed by the self-proclaimed 'Strathspey King', James Scott Skinner.  Hector was a role-model for so many of the younger north-east fiddlers and it is lovely to hear his playing again.  Willy B Henderson and Bobby Jamieson were from Shetland and their recording of Soldier's Joy/Deil Among the Tailors was made at a public dance.  They had both been taught by the same teacher, Brucie Danielson, and their style of playing, in unison, is quite different from that of Hector MacAndrew.

We also have Pipe Major Robert Brown playing a part of the pibroch The Massacre of Glencoe.  It seems possible, although the booklet notes are a little unclear here, that this tune was actually played during the 1692 massacre (Glen Coe translates as 'the valley of weeping').  I find it hard to imagine the tune being played during the slaughter, so perhaps it was played to ready the Campbells during the early hours of that fateful 13th February morning, or, more likely, in memory of the dead.

All in all, this is a most welcome CD.  If you already have some of the 'Scottish Tradition' CDs and cassettes you may wish to check out which tracks you already possess.  But, if you are looking for an introduction to Scottish traditional music, and to the work that the School of Scottish Studies has carried out over the last 50 years, look no further.  You will, I'm sure, enjoy this.