Songs of My Father's People
Mostly Scottish songs about love

Own Label, no number 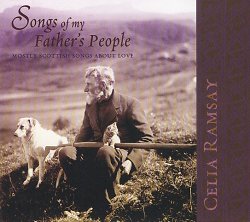 Well, this is a surprise!  I was wary of it from the first: Scottish songs from a Californian singer, whose father didn't sing and had never lived in Scotland.  Then, reading the booklet notes, I found reference to the runic graffiti in Maes Howe, and suggestions that aspects of these songs are thousands of years old, while others 'are as recent as the 1800's [sic].'  Who wouldn't be wary?  Particularly as (despite the enigmatic subtitle 'Mostly Scottish songs about love') two songs are Irish, two are English, three American, two more are Scots poems recently put to music, and one is by Les Barker!  Then I read a litte further in the notes and find 'but most of all I was haunted by the unaccompanied singers, whose voices immediately reached right into my heart ... [The songs] are timeless in their pain, joy, dismay or humor ... they are the voices of the universal human condition' and I think "That's exactly what I think, too!"  So I thought I'd better actually listen to the record.

Celia Ramsay has been cursed with a beautiful voice ... I say cursed because so many such people soon discover that all they need to do is to learn the words and the tune, and everybody will love them.  They seldom have any reason to find out how to sing these songs well, or do any further work on them.  (It's interesting to notice how few of our really good traditional singers have beautiful voices!)  Fortunately, Celia Ramsay has not relied solely on her beautiful voice - and this is the 'surprise' I noted in my first sentence.

I'm not going to suggest that she uses much in the way of melodic variation, or any of the other tricks that traditional singers use to keep our attention, and emphasise the emotional aspects of the story - but, nonetheless, she did stop me with the breakfast spoon halfway to my mouth on several occasions.

Her failing is that she hasn't used her skills evenly throughout the repertoire here presented ... some are just words and tune, giving me no idea of how she feels about the song or its story.  But False, false, a song well-known in this household, is extremely well sung (sound clip), as is The College Boy.  It's a shame that the same can't be said about too many of the others presented here.

She is accompanied on 12 of the 18 songs here and, for the most part, the accompaniments add to, rather than detract from, the performances.  Sadly, Celia allows the accompaniments to take over the singing - she is at her best by far in the unaccompanied items.  There are two extremely short songs that I'd not heard before - Jeannie & Davie and Roseberry - which will delight anyone who enjoys a fine economy in words.

So, the good stuff really is surprisingly good - a shame there isn't more of it.